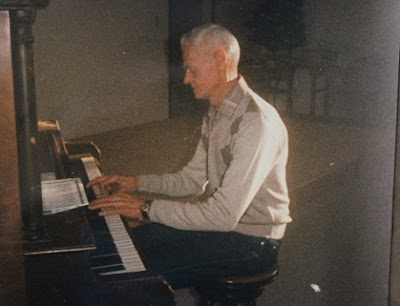 I don't have many photos of my Dad.  I'm not even certain where I found this one, as I know I didn't take it, nor do I know where it was taken.  It's not a particularly good photo, a little blurred, but still is one of my favorites.  There is a sense of other-worldliness with the light shining onto him with a sense of his hands in motion on the keys.

Dad loved to play the piano though didn't get a lot of opportunity to do so.  Mom always yelled at him when he sat down to play so he had to wait until she was out of the house (usually on Sundays when she went to church).

I assume he could read music, as he had a couple of hymnals that he used.  I don't know when or where he took any lessons or if he was simply self-taught.  It wouldn't have surprised me if it were the latter.  He undertook the task of learning to read in French when he was sixty by using a dictionary and laboriously searching out every word.

Some of my earliest memories are standing beside Dad as he played, singing along to some of his favorite hymns.  There were several but my memory only recalls they included Flow Swiftly Sweet Afton and The Old Rugged Cross.  I can no longer recall the words of the first and only the first verse of the second.

Dad passed away on September 15, 2008 at the age of 98. I'm sure there will be a celebration in heaven, though I suspect mom still won't allow him to play the piano.  Happy Father's Day Dad!  Thanks for the memories.

******
I've invited my daughter, J and baby Eli over for dinner this evening.  We'll celebrate J's first Father's Day.   He too, plays the piano, so I'm sure he and Eli will create some wonderful memories together.

It's been a while and not just since I posted, either.  This weekend marks the 40th anniversary of my high school graduation.  (No, even if I could find it I wouldn't post a photo.... just think geek with glasses and 70's hair.)

There is a reunion being held in my home town.  It is about a 4 hour drive from here.  I never planned to attend, to be honest I haven't kept in touch with many from my class, and of those I have the contact is mostly through Facebook.  I did join the Facebook group and have been following along through the pictures and posts.  You know what?  I don't recognize more than a dozen of them!  I guess we've all changed a great deal since high school.

Instead I've spent the weekend working around the yard mostly and doing a bit of housework.  Unfortunately I recently tweaked a knee and my lower back gives me grief so my efforts are somewhat hampered as I'm only able to work for short periods of time.  Oh well, I can still get it done. 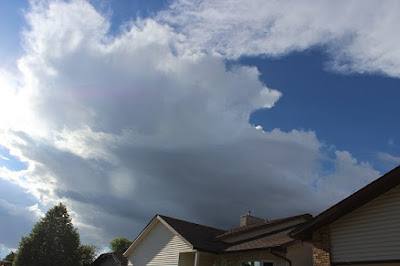 Yesterday morning I was up and at it early, weeding the front yard in the sunshine when I heard the loud rumble of thunder.  I looked up over the neighbour's house and saw this cloud.  When I looked around I could see there were several clouds to the south of us.  There were a few more rumbles of thunder and while we did get a few sprinkles from them but I was able to finish my work.  If you recall my front yard is zero-scaped, but apparently the weeds don't realize that.  They will take hold in the least amount of soil, even in the crack in the sidewalk out front.  I pull/dig out as many as I can and then Killex is my friend. 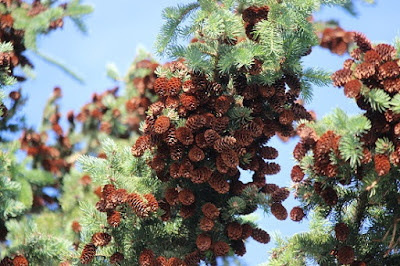 The afternoon was spent doing boring inside chores which I won't recite.  After dinner, I spent some time in the back yard cleaning up the fallen pine cones.  I barely made a dent in what has fallen this spring.  From the look of the tree top there will be even more to fall.

We had a decent rain accompanying a thunderstorm early Friday morning, but we're still very dry here.  I put the sprinklers on the grass and did some weeding in the back behind the sheds.  I discovered I have a tree that is nearly five feet tall growing there!  I know it wasn't there last year....so how it grew so quickly I've no idea.  I'll have to try to remove it with the clippers and if those don't work, borrow a saw. 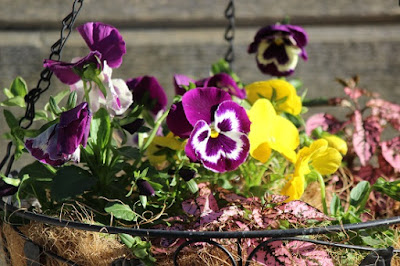 I moved the sprinkler to water the other half of the lawn, grabbed my camera and settled into a chair to relax and enjoy the lovely evening weather.

All of my containers are doing well, though there is the odd plant that don't appear to be thriving.  I'll leave them be for a while yet before I replace anything, as I have a tendency to over-stuff the containers.

My pansies are the shade most of the day but catch the sun in the evening.  The little faces make me smile.  One of the yellows did not survive but it appears the purples will take over the container, along with the pink coleus.

Last evening was the first preseason game for our Saskatchewan Roughrider football team.  It wasn't being televised so I listened to it on the radio (through the television).  Our team led most of the game but our rival Winnipeg Blue Bombers came back and took the lead in the last quarter.  With less than a minute to play, the Riders were able to tie the game.  It was an entertaining game - even if I couldn't see what was happening.

Tonight is game 6 of the Stanley Cup finals (hockey).  I suspect the series will end as Pittsburgh played extremely well last game and Nashville looked tired.  It seems so late in the year to still be watching hockey even though I enjoy the game.  It's football season here in Canada! 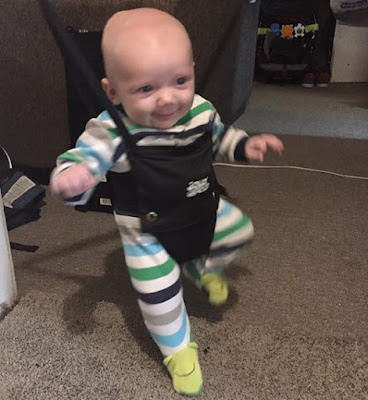 Oh, and I did have a visit with my Eli and D on Friday.  Since it rained heavily I couldn't get out into the yard as planned.  I picked them up about 10:30 and we headed out to a garage sale which promised lots of baby clothes.  There was lots of girl's clothing but not much for boy's.  We got a few items and decided to stop by the Salvation Army thrift store on our way to my place.  We scored there, picking up several items including a sleeper, shorts, t-shirts, a hat, and a hoodie jacket, plus a pair of capri pants for me.  Cost - less than $15.  Wow!  Everything was in good shape and at least two of the items for Eli appeared not to have been worn at all.

Eli was three months old on June 2.  He hasn't yet rolled over on his own, but the little stinker loves to be in the jolly jumper.  His head control is very good and D says he spends up to 45 minutes in it at a time. (I borrowed this photo from here Facebook page)  Tummy time is still not his favorite activity, I suspect because he hasn't figured out how to roll over, but he loves to hang out on his play mat and wiggle and kick.  He likes to know he has company but is quite capable of entertaining himself with his hands (hasn't discovered his feet yet), and is able to grasp and hold on to toys for a few seconds at a time.

The beginning of the month also meant I could take another marble from the jar.  There are only 18 left remaining...when I think back to the start there were 48.  The weeks and months are definitely passing quickly! I've been busy at work, it seems we've had lots of meetings and there are more changes coming.  But I won't get into that here.

Time to do some blog reading...I've been a little (a lot) lax lately.  Take care everyone and have a great week!