Back to my normal

It certainly has been a much more relaxed (and less emotional) week than the last. I did get a call late in the week for my next mammogram appointment in February 2023. It amazes they are booking so far out already. I've put it in my calendar and won't think about it again until closer to the date.

Some shopping did happen this week. Groceries on Monday, and I made a trip to Dollarama and the thrift stores on Tuesday. The best deal at the grocery store was 2 lbs. of blueberries for $4.88. I froze most in two cup bags for later, the rest will be used in my breakfast smoothies. Other than that, there was nothing exceptional - the old regular prices seem to be the new "sale" prices. 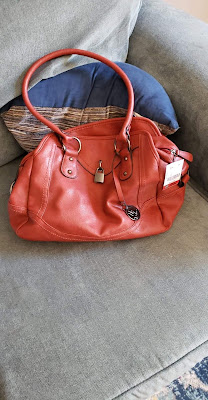 I did do well at the thrift stores. I found a book for Eli, he loves to be read to, as well as a counted cross stitch kit and more yarn (because, of course, I don't already have enough crafts to work on). It was senior's day so I had a 30% off discount. But it was at the Salvation Army that I found my favorite item - a leather purse for around $5 (after everyday senior's discount). I checked it all over and there were no rips or tears in the fabric and the bottom of the purse wasn't dirty or scuffed. I do like purses - it doesn't matter how fat I get, they still fit!

Out in the yard, the tomatoes are starting to ripen on the vine. I've been picking everyday and having them with my lunch or dinner. Two larger peppers were also picked. I'm looking forward to next week when I will pull a hill of potatoes. The one plant is starting to die back so I'm thinking they're just about ready for harvesting.

We had a very nice rain on Thursday with cool temperatures. My new rain gauge indicated about a 1/4 inch. I'm always happy to have Mother Nature do the watering. My containers have gotten huge this year. The variegated coleus is blooming. I'm hoping to keep at least one or two of the plants going over the winter. I'll take slips rather than transplanting the entire plants as I haven't the room for them otherwise. 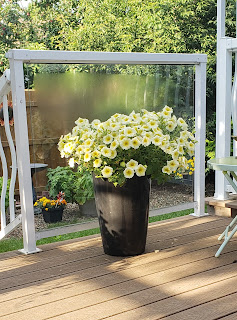 My one container of petunias on the deck had gotten very leggy and was looking terrible. I gave it a haircut a week or ten days ago and lost most of the blooms. Today it's looking fantastic. You wouldn't know it but there is a geranium in there too. I won't do that again as the petunia has hogged the space.

Back indoors, I spent some time knitting; I finished the first of the scarves I'll donate this year and continued working on my tank top. The scarf used up four balls of leftover yarn with just enough left over that I don't feel awful tossing the remainder out. I weaved the ends in yesterday on it as well as the crocheted baby blanket I finished last week. I'll pull a few more balls from my stash and start on another scarf in a day or so.

This morning started out lovely, with a temp of 17C (63F) when I sat out on the deck with my first cup of tea. The forecast is for 28C (82F) later today and those temps are expected to last for the rest of the week. There is a good possibility we'll have thunderstorms - I've had a notification of lightning with 100 kms already this morning. For the moment the windows are open for the fresh air but that won't last much longer. 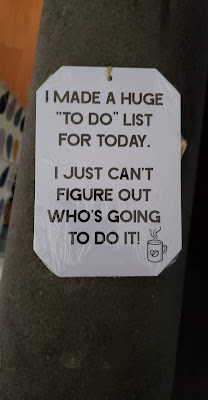 I've got baseball and football to watch today, so I'll be happy to stay indoors when it heats up. In the meantime, I'll head outdoors to check on the containers and enjoy some more deck time. I've started reading a novel, Catherine Coulter's Back Fire and I'm really enjoying the story.

I'll leave you with this little sign I found at the dollar store. I'm planning to give it to my daughter but to be honest, it applies to me too. :)  Have a great week ahead everyone.