Not so sunny days in Grand Cayman and Jamaica

The best laid plans of men and cruise ship itineraries often go awry.  This was the case in Grand Cayman.  I've no photos from December 12, the day we arrived at the port of Georgetown...though I'm not certain why.  It was sunny morning as we arrived around 11 a.m.  However, Grand Cayman is a tender port, that is we have to take small boats from the ship to island.  The ship anchored off-shore and attempted to send the first tender to shore.  This tender contained crew members whose contracts were complete and who would be returning home, as well as those manning the boat.  Unfortunately when they arrived at the port, there was a minor accident, one of the crew members fell and required hospital care to get stitches for his/her injuries.

The captain tried several times to stabilize the ship, but the winds and swells were high and because of our positioning it was not possible.  There was another ship also tendering but they were further in towards the island and were able to proceed.  This irritated many of our passengers, but I would rather have been safe on the ship than chance an injury or worse.  So in the second to last port we got a sea day as we headed out shortly after noon.  I don't recall what we did to amuse ourselves, but I don't remember being bored! 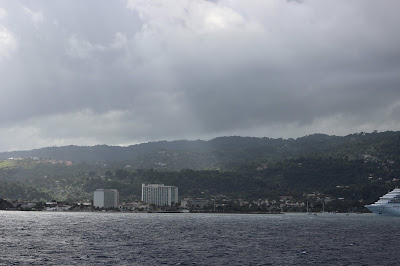 Our last port was Ocho Rios, Jamaica.  The sky looked a little dicey and I was worried we were in for rain.  But there was a bit of sun peeking through the clouds...so fingers crossed!

As it turned out, it never did rain at the port area, though I believe it did so inland.  We had thought to walk or take a taxi to the Konoko Falls and Park, but decided against it as none of us felt we just had to go there. 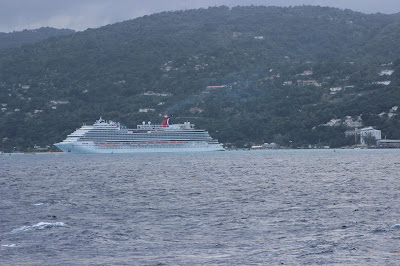 And then I saw it...the Carnival ship we'd been following the previous day was in port ahead of us.  They got the good spot!  Just like the Royal Caribbean ship the day before.

But Ocho Rios is not a tender port, and does have a dock that we could use.  Unfortunately it is the industrial port, not pretty at all! 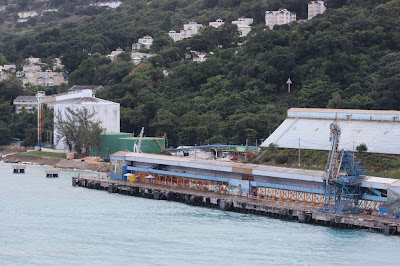 This was the same port we docked at in February.  That time I had an excursion booked, this time K, J, and I decided to walk into Ocho Rios.  We'd heard it was about a 15-20 minute walk, I would say it took us less than 15 minutes.

As an aside, I would note although we were warned about aggressive taxi drivers in Jamaica, we had no issues.  After saying no thanks to the first couple, no one else bothered us on our walk.