Finally, we're getting some weather that is near normal temps for this time of the year.  In fact, I was able to open up the sun room on Tuesday afternoon!  The outside temp was -10C (14F), but with the sun the ambient temp inside the sun room was just above the freezing mark. 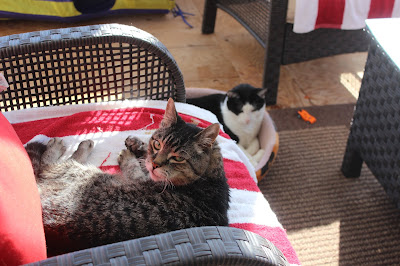 I had two very happy cats!  Sasha especially loves to spend time out there with the sun on his fur warming his old bones.

The room needs a good cleaning, since it's been sitting all winter but I'm not nearly as enamoured about spending time out there just yet. The floor is cold, and I don't curl up quite as well as a cat. :)  The cleaning can wait for a couple of weeks yet.

The curling continues this week with the men's Brier, being held in Brandon Manitoba. That's given me lots of time to work on my crocheting and knitting projects.  I've finished the table runner, though I plan to add a backing to it so it's currently sitting on my sewing table.  I did however, finish this: 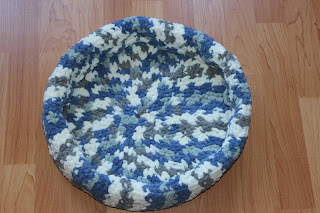 This is the cat bed I mentioned.  It took one skein of Bernat blanket yarn, and because it is such a bulky yarn it made up very quickly.  I had thought I would knit it, but this pattern (crochet) was so simple, I went with it instead. I did end up ripping it back because the center wouldn't lay flat.  I realized I'd added an extra stitch (or two or three) at some point that was messing me up but once I figured that out, it was done in just a few hours.  I like those kind of projects!

I have enough yarn to make a second but will leave it for now, as Sasha never uses a cat bed.  Saku will though and within minutes of my setting it on the floor, he was curled up in it.  Later, that evening, he even took a nap in it.  So while it seems a little small to me, it's apparently "purrfect" for him. 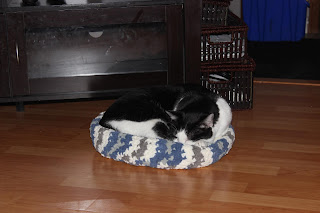 You would think with all the projects I've been working on, I'd be close to using up the yarn stash.  You might think that but you'd be wrong.  I had no idea how much yarn I had packed away.  It will be some time before I get through it all!

I wasn't certain what to start on next, so I went to the bin and pulled out a couple of balls of yarn.  After a search on the internet I found a pattern using that specific yarn and only needing two balls.  What I'm making is a scarf/shawl with a lacy pattern.  It's a bit fussy so will take some patience and some time.  Pictures will come later when I have a bit more completed.

On Wednesday I made a run out to our new Costco store.  It opened in late November and is a bit of a drive further out of the city, where it used to be a few short blocks from home.  I didn't go often, but I will likely go even less now.  But they had a few items on sale, that I wanted to pick up including pull-up diapers for Eli, chicken breasts, and flour.  As is the case with Costco, I ended up buying other items, hot dog buns and hot dogs, and I forgot to buy flour.  Oh well, I'd made two dozen buns and a batch of muffins on Monday, so I really don't need the flour just yet.

Not much else happening here.  My purging of household items has slowed, though not completely, as I keep identifying items that I no long need or want.  The decision then is, whether I keep for one of my adult children or if it goes in the donate bin or the trash.  I'm really enjoying this because as the items are leaving, the house is getting easier to keep clean.  Go figure!

Retirement has also brought on a couple of other welcome changes.  I'm sleeping far better than I was before.  I used to wake up two or three times a night, and on occasion lay awake for sometime; now most often I sleep for a solid eight hours.  It's wonderful!  Today I even slept through C leaving for work - normally I would have heard the garage door open and close.

I'm always eating much more healthily.  I have time to plan and cook evening meals (I think I probably had time but I was too lazy) and when I'm on my own I actually take the time to make something and sit down at the table to eat and enjoy it.  Add in the extra activity of working around the house and I've actually lost 8 pounds.  The difference wouldn't be noticeable to anyone but me, but I can feel the difference in how my clothing fits.  (Not enough that I need to rid myself of any more clothing.)

Basically, things are chugging along here.  That's a good thing.