It feels a little odd to be writing another post so soon after the last one.  I guess I've gotten used to the idea of writing once a week.  To those of you who write daily, or nearly so, I'm in awe of your diligence.

Other than walking, I've spent most of the week at home, though did get out for groceries and a brief shopping trip on Thursday.  I haven't been to the thrift stores for some time and had an urge to check things out.  The protocols have changed since my last visit.  The stores are limiting the number of customers, though I must admit the number must be large, at least at Value Village because the store was busy.  There are sanitizing stations at the door, and someone there to explain the changes.  V.V. does not require masks, though the Salvation Army store does.  I always mask up so it wasn't an issue for me. I was glad to leave the store (V.V.) as there were three Hutterite women entering without masks.  Here in Saskatchewan, their communities have been hard hit by Covid-19.

At V.V. I found a bag of Christmas yarn, some sparkly red, sparkly green, a partial skein of variegated red, green, and white, and a solid red.  I've tucked these away for later, I'm sure I'll find a use for it.  I was also able to find a pretty blouse for myself, and a jacket for my daughter. The jacket appears to nearly new, with no noticeable wear.  I checked the brand with my daughter, and then did a search on the 'net.  I paid $12 for this jacket, when the regular price is between $60-70!

Over at the Salvation Army store, I found a pair of jeans for $6 for myself, and a pair of pants for Eli for $1.99.  The pants I found for him, have the expanders to allow for better fit at the waist.  This summer he's stretched and slimmed down so D was thrilled when I told her about my find.  Like every other little boy, he's pretty hard on the knees of his pants. 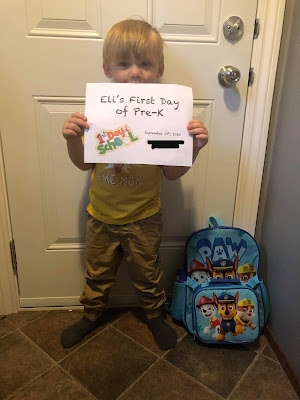 Speaking of Eli, this happened on Thursday. Our little guy has started pre-K!  D has spent the last few weeks preparing him for it, as he has never been away from her for very long, except with me, my son, or his Dad.  He had met his teacher in June, but all of the students would be new to him.  D explained mommy would drop him off, and then pick him up in a couple of hours. He was told too, that he needed to listen to his teacher, to do as she asked, and if he needed something to use his big boy words.

There are 15 children in the pre-K, and the school had the children start their first day in groups of four, and the last group which Eli was in were only three.  The older children enter the school about 15 minutes earlier than the little ones.  D drove Eli to school and they watched as the older children lined up to go inside.  Mrs. H (the pre-K teacher) met the children and parents in the playground and gave them some time to play before they went indoors.  When D said she had to go, Eli called to her, "I love you mommy, bye!" At pick-up Mrs. H. told her that Eli had been very good, and I think that's when D finally exhaled.  I wasn't surprised, he doesn't generally misbehave when he's with me either, he saves that for his mom.  Next week, the children who attended last Mon/Weds will attend together the same two days, and the Tues/Thurs children will attend those days.  The following week all fifteen will attend all four days.  The class is only 2 1/2 hours but it is a good way for Eli to spend time with other children, and a chance for D to run errands, do housework, or simply relax.

While I've been at home I've been working on various craft projects.  I pulled out a counted cross stitch kit that I bought at a thrift store earlier this year.  It's a Christmas bow for a door or perhaps on a wreath.  My eyesight requires good lighting for stitching so I tend to work on it only in the afternoon with the lamp on the table beside me turned on.  I'll share a photo when I finish it.  I'm not sure if I'll keep it, or if I'll gift it to my SIL.

I work on Eli's sweater while watching hockey.  The series has reached the final so there will only be games every second day so I've started watching basketball and do my knitting then.

This is it, about mid-way through the process.  The portion to the right is a sleeve, the bottom is the partially completed back, and the top is the completed left front section.  It looks a bit like a puzzle doesn't it?  I've got the right front on the needles now, and a few inches in I'll knit across it and the unfinished back portion for a bit, then reduce the number of stitches to create the second sleeve.  I've never made a sweater in this fashion and am finding it fascinating. Fewer seams is always a good thing for me - though I'll still have the side seams, and the sleeve seams  to sew.  It has a hood as well, and I may try to figure out how to create it by picking up stitches at the neck line as it's made in a separate piece and sewed on.  Or maybe I'll just follow the pattern. :)  I stopped in at our Fabricland on Thursday to find buttons for it, and lucked out again.  The buttons I bought were one sale for 33 cents for two buttons - I needed four so for a whopping 73 cents taxes included I have what I need.

After I baked the banana bread last week, I decided my mini loaf pans had seen better days.  They were badly stained and no matter how hard I scrubbed they just never looked clean. I didn't want to throw them out though and figured they'd be useful for something.  I picked up some chalk paint at Walmart and gave one of the tins a coat of paint - I didn't worry that it wasn't perfect because I figured for the purpose I had in mind it would likely show some wear sooner than later.  I had the letters from scrapbooking I used to do, used four small chair felts for the base and now the little tin is perfect for holding my dish scrubs.  (Connie, do you recognize the pretty one?) It was an easy and quick project, and I have two more tins to make up - perhaps I can gift these two.  I think I'd use the word scrub though rather than wash, any other suggestions?

I had thought I'd spend this weekend pulling annuals, but our forecast is for decent weather for the next two weeks so I'm going to leave them be, keep watering and deadheading for a little longer.  Instead I'll cut back some of the perennials, especially the ferns as they have almost completely dried out.

Since I had the time I headed for a good long walk this morning, past the creek and pond, then over to a nearby mall to pick up some cash at the bank before returning home.  I took my camera, so you know what's coming next.  :) 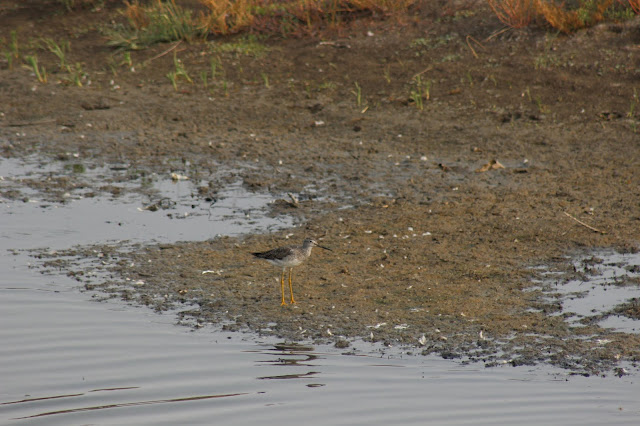 I'm happy to see the Godwit is still around.  The adults apparently migrate first with the adolescents following later.  They winter along coastal California, Mexico, and even into South America. 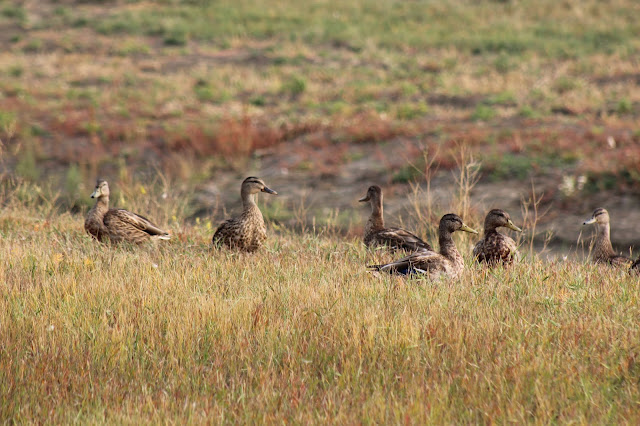 This is my favorite photo of the day.  The ducks were up above the creek relaxing in the grass, where they've worn a path up the hill.  I've seen them moving up and down the path before but never just hanging out up there.

Over at the pond the geese were in the hundreds, and more came flying in as I watched.  But you've seen a bazillion photos of the geese so I won't bore you with any more. 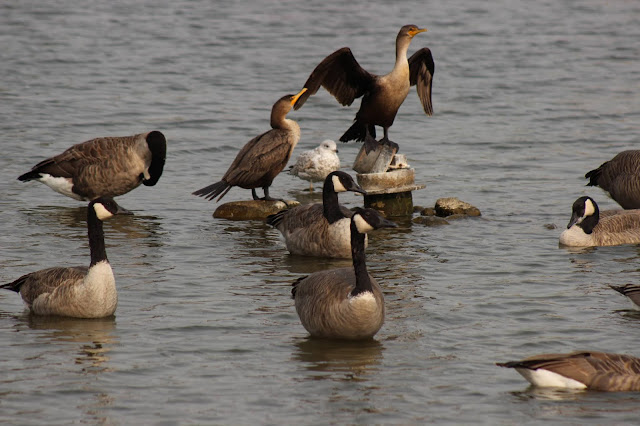 Yes, there are geese in the photo, but also the two cormorants and a gull.  The cormorant was what I was focused on because it was about to fly. 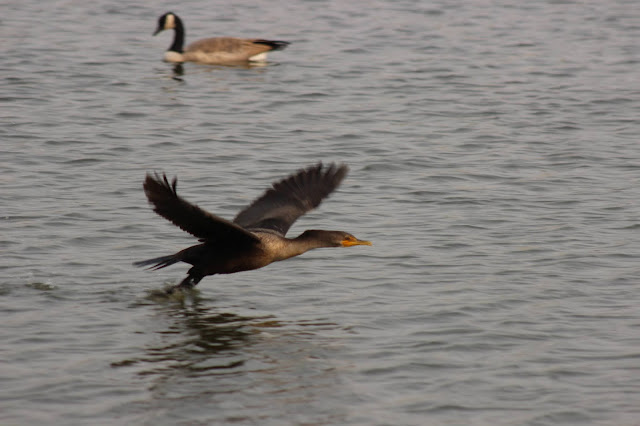 It must be heavy as it dragged its feet in the water as it took off. 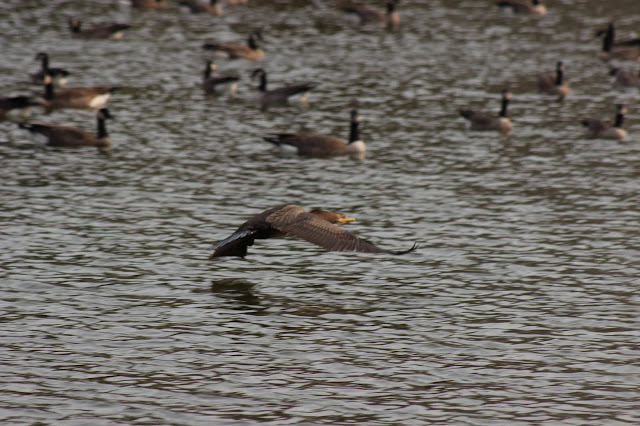 This is the final shot, it is still low over the water and then it disappeared behind the reeds and grasses.

And that's it for this week, I'm going to head outdoors to clean up the front flower bed and enjoy the sunshine. Take care everyone and stay well!