It was a quiet day here on Christmas Day, with just my son and I and the two cats.  My brother had stopped by on Christmas Eve to drop off a few gifts, and we ordered in pizza for dinner that evening. I was being entirely lazy and planned that we'd eat leftovers on Christmas Day.  We did; my son had pizza and I ate the remainder of a pasta bake we'd had earlier in the week. I didn't even do the dishes, they sat in the sink until this morning.  As I said, lazy!

I started the morning, as always, woken by the yells of a hungry cat. At 20.5 years of age, Sasha has no patience when waiting for his meals.  And he's spoiled too.  After feeding the cats, I made a cup of tea and sat in the living room, with just the glow of the Christmas lights from the tree.
This is a something I've done for years.  I can even recall being a teenager, and getting up in the quiet of the morning to sit by myself in the living room.  Usually Dad would be awake too, but busy with lighting the oil burners that heated our farm house, bringing in water, and starting the coffee for Mom.
It was a little more difficult to do when my children were young as they were up at the crack of o'dark. We always spent Christmas at my Mom and Dad's, and she had a rule no gifts could be opened before we'd had breakfast.  Breakfast didn't come before her coffee either!  Since it was her birthday and her house, her rules. As the children got older there was definitely more quiet time for the adults first thing in the morning.
Similarly, yesterday my son was up about noon'ish.  Once the pot of coffee was made we opened our gifts from R's family.  My gift is perfect, a pair of cleats to attach to my boots or shoes, so I can walk this winter with less concern of falling.  We've got snow in the forecast for today so I'll likely wait a day or two before testing them out.
I spent the day knitting, watching a movie (Fried Green Tomatoes) and three games of junior hockey, and I joined a zoom call with my older brother M and his family.  My first time using zoom and it went very well. I probably should have waited until later, though, as most of M's stepsons and grandchildren weren't interested in our conversation.  The youngest boy A and I had a chat, as he's currently living in Vietnam, and I was quite interested to hear how he ended up there.  I think, had M's wife D been on the call as well, it might have been easier but she was busy making a meal for the two of them.

I also had several calls from my daughter and video-chatted with Eli at least twice.  I know she was feeling quite lonely being on her own.  Next year will be different, I'm sure.

Later I did more research on my family trees in Ancestry while looking through various photo albums. Mom had eight photo albums, and my grandmother (Nan) one as well.  The latter album has disintegrated over the years and the writing under the photos has faded. 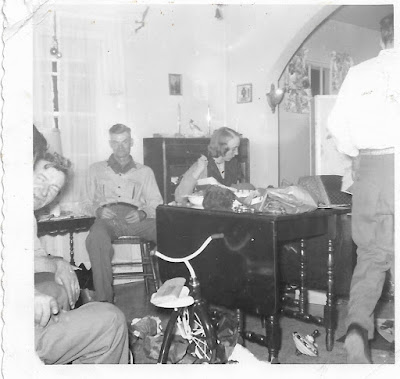 This is one of the photos I shared on FB with various cousins.  It was taken in December, 1954 in my Nan and Grandpa's home. I originally found it loose in Nan's album but later noted that it should have been in Mom's as she had a notation that read "Dad (head), E and A." The photo bomber is my grandfather, E is my dad, and A is my aunt - she was married to my mom's brother B.  Dad and Mom were married on November 26, 1954, so this photo was taken just weeks after they married.
One of today's tasks will be to sort through the loose photos to see if I can find the appropriate places in the albums.  I'll also try to decipher and re-write the information in Nan's album.  Note to myself - printed photos should include details of names and dates. It sure makes it easier for those who come later.
I've started my eighth scarf, this one crocheted, and there are three junior hockey games today as well.  There are some chores that need to be accomplished first though, so I'd better get moving.
Take care everyone and stay well!