Freak it out, breathe it out

I'm a day later than normal posting because I spent Friday and Saturday with D and Eli.  It was a wonderful visit, with lots of hugs, laughter, and cuddles.  Nothing fills my emotional tank more than when that little boy climbs onto my lap and snuggles in.  More on the visit later in the post.

My son was back to work this week after a week of vacation.  That meant, of course, I was busy with housekeeping that was ignored the week prior. If he has a week off, I have one too, right?  I shopped for groceries and ran errands for D to pick up her meds to deliver to her this weekend.  The weather was cool most of the week, but no rain so I needed to water my containers a couple of times.  We did get a light frost on Friday morning, but there was no damage done to any of my plants.  It will have to drop to -4C (25F) before things will start dying off.  The ivies and impatiens as always the first to go, but the petunias will take the first few frosts without much harm done.  Still, I'll pull everything by the end of the month and get the yard cleaned up for the winter months.

I did get out walking this week too, on a lovely seasonal morning.  No photos as I did not take my camera with me.  There were fewer ducks and more geese on the pond. I suspect they're starting to gather for their migration south but some actually stay here over winter on the man-made lake by the power station.  The water stays open there, but I have no idea what they feed on.

I left the city about mid-morning on Friday for my visit to D and Eli.  She is having her upstairs bathroom renovated, so we'd plans to get out of the house, driving to the nearest large community to do some shopping and allow Eli to play at a local park.  CT has been working at the house since Tuesday and run into a few issues that have taken a little more time - it is a 110 year old house - but I suspect he'll finish by the end of this upcoming week.  Eli is quite interested in what is going on, but has been good about staying out of the way when he's at home.  He does like to visit sometimes though, so I'm sure the contractor, CT appreciated our being out of the house for several hours.

A friend had recommended the park to D, and we were really happy with the choice.  It had a large piece of playground equipment with slides and climbing apparatus on it.  Eli ran, climbed, and jumped while D and I ate lunch at a nearby picnic table.  Only after he'd checked everything out did he come and eat. 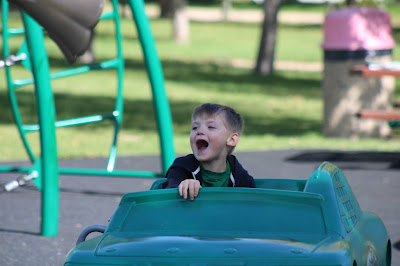 This little car was a hit; he climbed in and on it.  It was on springs so bounced when he did so.  I think you can tell he enjoyed it very much. 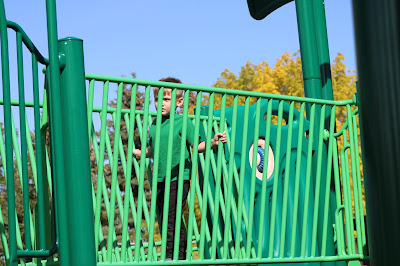 In this photo, he is awaiting his turn to go on the big slide. At first he was a bit tentative as it's quite a bit higher than the one at his local park, but soon he was happily zipping down the slide.  There was a large hill in the park, where I suspect the children sled in the winter.  He had to climb the hill too, and roll down it.  It's an Eli thing. :)

After our visit at the park, we wandered the local Value Village, where we found a few books for D and Eli, a toy microphone for Eli, and a bag of crochet cotton for me.  D was soon wishing he hadn't gotten the microphone as it echoes but she's the one that pointed it out to him.  We also wandered through Winners, then headed to Canadian Tire so Eli could show me the Lego pirate ship he wants for Christmas. I promised him I'd check out my local CT when I got home. Little does he know, but the present is already in the closet here as I ordered it last week.  Good thing, as D checked and it's currently out of stock on-line.  It's meant for an older child, but D has assured me she'll put it together.  I used a couple of gift cards I'd earned from completing on-line surveys to reduce the cost, and she and I shared the reduced cost.

After a quick stop at Walmart for a couple of items, we headed back to their home.  CT had finished for the day, so of course, we headed upstairs to check out his progress.  He's got the tub in and has put in new concrete backer board around the tub, replaced, mudded and taped drywall that was damaged and replaced subflooring where the vanity was previously.  I had been worried about the flooring under the linoleum, as it was very uneven and I thought it might be due to water damage.  However, it turns out during the previous renovation, someone had used some filler to try to level the floor but had done such a poor job of it, it was even more uneven.  He'll be doing something similar but has assured us, the floor will be even and level.  He'll be back this week and I expect the bathroom will be complete (fingers crossed) by Friday.  She'll have a brand new tub, toilet, and vanity with subway tile around the tub.  I had a mirror that he'll hang for her rather than purchasing something new.

CT ran new lines to the basement because the old lines were in rough shape.  He installed shut off valves for both the cold and hot water so she can shut the water off in that bathroom without losing water service to the rest of the house, if need be.  While in the basement he realized that one of the runs from the furnace to the second floor (installed less than two years ago), had not been hooked up so he did that too.  There was some additional taping he felt needed to be done as well.  As a result it's taking longer than he originally estimated, but on the other hand, he's noticed things neither she nor I had or would have so even if this costs a bit more it will be worth it.  He mentioned that her basement was probably pretty warm last winter...this year the work he's done should ensure the upstairs gets the heat instead.

On Saturday, we did a bit of housework before heading to the local park.  Eli had fun on his own for a bit before another child he knows arrived.  The two had a blast together, chasing one another, using the big slide, and even wrestling in the sand.  Later on, at home he played in his sand box, in which he'd dumped a bucket of water.  He went directly into the bathtub (she has a second full bath on the main floor) before dinner! This photo was pre-tumbling in the sand. 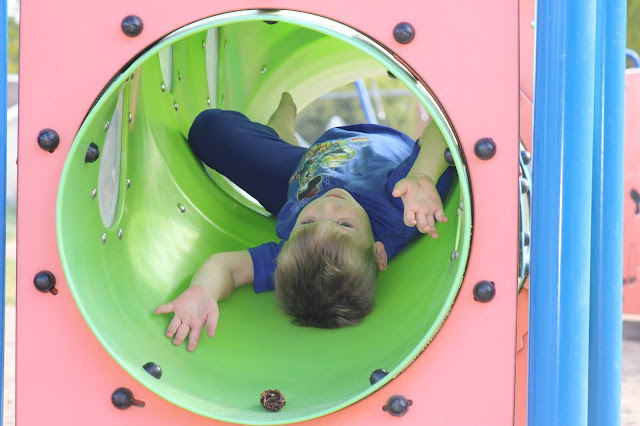 On Saturday evening, Eli and I were hanging out on the couch and we noticed a fly buzzing around.  I started singing, "There was an old lady, who swallowed a fly...".  While I struggled to remember the words, Eli found the story on his tablet and brought it to me to read.  Now, D has never read this story to him, and how he knew where the story was located in his app is beyond both of us.  He snuggled in and I read/sang the story to him.
At one point D was struggling to get the television connected to her I-Pad so we could watch football and was expressing her frustration. Eli went to her and said, "freak it out and breath it out, mama."  She started to laugh and things went much better after that.  She said to Eli, "where did you learn that?" He again grabbed his tablet and pulled up a cartoon where the phrase was used.  We tried using it with him the next day...it didn't work nearly as well. But he clearly understands and is learning lessons from the shows he watches and retains that information.
All in all, it was a wonderful two days. It was an unremarkable week until then; spending time with this little boy and observing how he is growing and developing into a (mostly) sweet and helpful child is truly a joy and a blessing.  I'm so fortunate they live within a reasonable distance and are in a place where they are safe and content.
Even so, I'm grateful to be home where it is quiet.  The cats are happily napping in the sun room, though it is cloudy today.  I'm going out to check my containers as it heated up yesterday to 32C (90F) so I expect they'll be wanting water.  Then I'll relax on the couch with my crocheting to watch the rest of the baseball game.  I just checked and there is curling to be viewed as well.  I'm in my happy place!
Have a great week ahead everyone!
Posted by Maebeme at 12:43
Email ThisBlogThis!Share to TwitterShare to FacebookShare to Pinterest
Labels: grandson, joy, visit, weather