It's been a busy week! The Brier ended Sunday evening with a win by the Brad Gushue team out of Newfoundland. The team was our representative at the Olympics in February, and the thought was they'd be tired. Well, they certainly didn't show it winning all their games in round robin play. They did lose in the 1 versus 2 page playoffs but came back and beat the winner of the 3 versus 4 in the semi-final to reach the final. What was even more impressive is their third player was diagnosed with Covid on Saturday and the three team members played the remaining games without him. Mark live tweeted through the game and it was clear he was stressed not being on the ice. :) The team will be off to the Men's Worlds in Las Vegas later in March.

With the curling out of the way (for a few days) it was time to tackle the housework that was somewhat neglected over the past ten days or so. I spent the first few days sweeping, vacuuming, scrubbing, washing and tidying in preparation for my visitors on Thursday. D and Eli arrived in the mid- afternoon. She had planned to leave right after school ended at 11:30, but a friend let her know there was fog on part of the highway. She still ran into fog for about 20 minutes but it wasn't too bad.

Eli was able to get his first Covid vaccine on Tuesday, with the second to follow in about 8 weeks or so. He was very brave little boy; there were some tears but D made it up to him with a trip to Tim Hortons for a doughnut treat and some time at the sledding hill.

No sledding to be had at Gma's. I might have taken him to the park but the street was a mess and because of the ridges the grader made the sidewalks were ponds as well. Though I'll take the ridges of snow - were the snow still on the street it would be tough going with our smaller vehicles. There is a good reason why most of our neighbours drive trucks and SUVs. This is what the first week or so of spring looks like around here. We're forecast to have daytime temps over freezing so with a little wind it will clear up in the next week or so.
Eli and I did spend some time in the back yard, first on the deck and then he convinced me he could dig a path in the back yard to the bird feeder. He started his little dump truck and a rake and soon was marking out a path. At one point, he lost one of his boots in the snow, and turned around and carried it back to me to get help getting it back on. Silly kid! I grabbed the shovel and cleared out a wider path behind him.

Other visitors to the yard this week included the hare out front on Monday. It was enjoying snacking on the evergreen and then settled down to rest. At least it did until my son pulled out of garage. Then it took off in a big hurry. This next photo is of a little redbreasted nuthatch. For many weeks I've seen this wee bird when I go out to fill the feeder. It sits in the tree close by and talks to me - truly! It has a sweet call and I like to think it is saying thank you. I've tried several times to get a photo and each time it's been camera shy and flown away. Since I got the photo, I haven't seen it at the feeder. Hopefully it's okay and I'll see it again soon. (This was a cellphone photo and I cropped it to see the bird more clearly.) 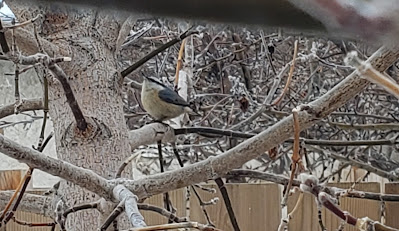 On Thursday morning, I looked at the kitchen and spotted Hoover at the feeder. I thought the lighting was pretty - it's furs all aglow. 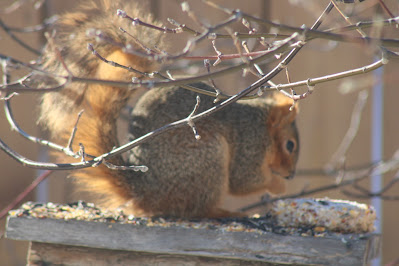 Of course the camera focused on the branches but I didn't want to take the time to manually focus. I was right, as it spotted me and headed down the fence line.

While Eli was here on Friday morning, he got to see the downy woodpecker as well as the squirrel at the feeder. He told me they have a squirrel in their yard too, named Squirrely. D says it climbs on their neighbour's room and chatters at them.

They both had doctor's appointments Friday afternoon, and headed home once those were complete. D brought the paperwork from the pyschologist for the doctor to add to his file. It was confirmed last week that Eli has ADHD. We're lucky he was diagnosed early as the supports are being provided even before the official diagnosis. Dr. J pronounced Eli a physically healthy little boy and noted he has astigmatism. Not a surprise as we all have it in my family. The three of us, D, C, and I all wear glasses, though my son C has a tendency to only wear them for driving.

Before they left, Eli turned to me and said, "G'ma - you're the best!". I do so love that little boy - he is so sweet. Our visits are always fun, though tiring. I did a couple of loads of laundry after they left, did a little clearing of slush and ice, but did little else for the rest of the day.

Today I've been puttering around this morning, doing a few chores, setting a batch of buns, and catching up on blog reading and television programming. The Women's Worlds curling starts this afternoon at 3 p.m. local, with Canada taking on Italy in draw 1. Next up, is Norway at 8 p.m. I expect both games will be fun to watch. So you know what I'll be doing for the much of this week. The sports network will only air the games Canada is in, until the weekend when the qualification games begin. Fingers crossed, our Canadian team will be in the thick of it!

Of course, I can't forget that the spring equinox occurs tomorrow. It won't be truly spring here for a few more weeks, but I'm happy that the long winter is fading.  Happy Spring everyone!

Posted by Maebeme at 10:52
Email ThisBlogThis!Share to TwitterShare to FacebookShare to Pinterest
Labels: backyard visitors, curling, grandson, nuthatch, spring on the way?