I'm writing this post from my daughter's home because we are snowed in. Wednesday was our Eli's 5th birthday, but he was in school this week, so I travelled up Thursday afternoon to spend some time with the birthday boy. In Regina, the snow started falling that evening and in less than 48 hours, 20 cms. (about 8 ins.) was on the ground. 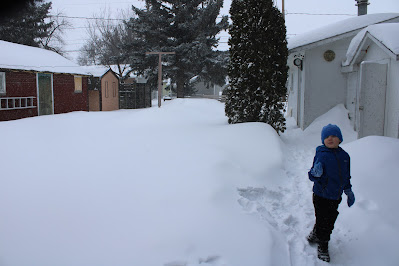 It didn't start snowing here (about 90 minutes away) until Friday morning and we got about 5 or 6 inches in total. Even so, by evening both my daughter and I had been out to shovel the walks and clear a bit of the back yard behind the garage where the cars are parked. It's much easier to clear a few inches at a time than to tackle the full snow fall all at once. However, the back alley is plugged with snow so there is no getting out until the city sends out the cleaning crew. The graders and trucks have been out throughout this morning but alleys will be among the last areas that get cleared. I just have to hope that there will be enough big-ass trucks going through that I can follow in their tracks out to the closest street tomorrow morning. (Her house is about mid-block).

I hadn't realized the storm was going to bring so much snow, but luckily I had tossed in some extra clothing, grabbed my laptop and camera, and my un-finished knitting. We took Eli to the indoor playground Friday morning, and I was able to finish sewing in the ends on the three pairs of mittens. I had some additional yarn and needles too, so started another mitten in the evening.

The curling started up again Friday evening, and I was to watch on my laptop. D doesn't have the same cable line-up as I have, though we might have cast it to her television through her I-Pad, it was just as easy to sit  with my knitting on the couch and watch the computer on the arm of the couch. The first game was terrific - our Saskatchewan team were playing the Alberta team and it was a see-saw game from start to finish. Unfortunately our Sask skip missed his shot to win the game in the 10th end, and Alberta was able to score in the extra end to seal the win.

In other news, earlier in the week, I had done some more research on Ancestry and uncovered another unknown (at least to me) piece of family history. I don't recall my mother every mentioning it, and as she was only a very young child at the time, I doubt she would known about this information either.

Back in 1931, there were several political parties in Saskatchewan. Two of them were the Labour party and the Farmers Union; these parties merged into the Farmer-Labour party that year. The following year at a convention held in Regina, the Cooperative Commonwealth Federation (CCF) was created as the party to lead the country in its recovery from the depression. Meanwhile, my great-grandfather was selected as a candidate for the Farmer-Labour party to run in the 1934 provincial election. He did not win a seat, in fact came in a distant third. I did find later references to his name in local municipal politics so it appears he turned his attention to local affairs after this attempt.

Using the newspaper archives site has useful too, to identify marriages and deaths. I've been able to add to the tree using this information. Yesterday I heard from a distant cousin who lives in the States, as I had added information for her mother. She was curious how we might be related - I was able to tell her 4X great grandfather and my 2X great grandfather were brothers. She was thrilled to hear we were related through her mother's side of the family too.

Beyond that it was a quiet week at home - the flooring showed up mid-week, I did housework, and ran to the grocery store.  I initially had planned to pick up fresh fruit and veg for D, but there were a number of sale items that I grabbed for myself too. BOGO on chicken breasts, which is always a great deal was the one I was happiest about.

Off to help my daughter file her tax return. There's another curling game at 2:30 local time so I want it done well before than.  Have a good week ahead everyone.