And so it starts

Let me preface this post by saying, brrrrr!  I arrived home last night to -20C temperatures with windchills making it feel more like -30C.  Quite the change from my last two weeks, but at least we're fortunate not to be getting a lot of snow as other areas of the country are.

The morning started early for me on January 5, as the taxi arrived at the house ahead of schedule at 4:10 a.m. More than ample time for my 6 a.m. flight to Calgary.  We were slightly delayed but arrived in plenty of time for my trip through Customs and security...when will I ever remember to take that bottle of water out of my bag?  The flight to Newark was uneventful and we landed about 2:30 p.m. local time.  AND that's when the delays truly began.  We made our way to our carousel to wait for our luggage and we waited and waited and waited some more.  Finally, about 45 minutes in Ms Impatient (that would be me) had had enough of waiting so I tracked down an Air Canada agent and asked where our luggage was.  He checked my tag number and assured me it had been put on board the plane in Calgary.  It took me a little time to explain to him that wasn't my concern but where it might be now.  He didn't believe me when I said there was a whole planeload of passengers waiting, but was quickly assured by others that indeed we'd all come in together.  Off he scurried to find out what had happened to our luggage.

Meanwhile there were a few passengers from a Toronto flight also waiting.  One of the passengers and I struck up a conversation, and discovered she too was sailing on the Anthem the following day.  L is from Nova Scotia and this was her very first cruise!  Eventually her luggage arrived and 15 minutes or so later, so did ours.  I called my hotel and discovered I needed to take an air tram over to the terminal where the shuttles are allowed to meet passengers.  When I boarded the train, there was L again and we had a chat while we waited for our shuttles to arrive. 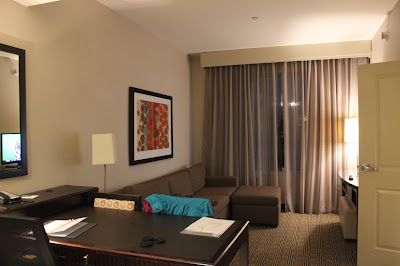 I stayed at the Embassy Suite Hotel in Elizabeth, New Jersey.  The hotel was highly recommended by other cruisers.  They were right!

The room was truly a suite with a separate living area and bedroom.  To the rear of the desk is the kitchenette with a fridge, sink and coffee maker. 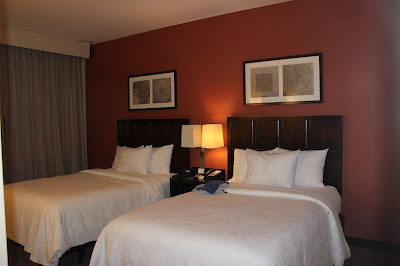 The bedroom was large, held the two double beds and dresser with a television mounted above it.  The bed was very comfortable and I had lots of pillows...which I much appreciated. 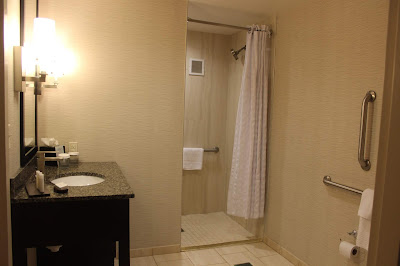 The bathroom was massive, as was the shower - it extended behind the wall by the sink.  I could have had a party!  But I didn't.  There were two doors leading into it, one from the living area and the other from the bathroom.
The hotel is located across from the Jersey Gardens mall within walking distance, though there is a bit of a busy street to cross.  Thankfully there are lights.  Also nearby is Ruby Tuesday's and this is where several of our Facebook group met for dinner that evening.  It was great to get to know a few people before getting on board the ship, and the food was terrific too!  Ruby Tuesday has a lovely salad bar which I enjoyed immensely.  By 8:30 p.m. I was tucked up in bed at the hotel, as travel days are always draining.

Of course I was up early on embarkation day!  I had breakfast at the hotel (complimentary) at 7:30 a.m., relaxed in my room for a bit, reading and watching television before checking out shortly after 9:15.  There were many of us waiting for the shuttle to the port, we were delivered there by 10:30 and on board by 10:45.  That is the fasted boarding I can recall!

Time to explore the ship!  This photo is actually the aft of the ship, and was taken when we were in Barbados.  There is a method to my madness though for sharing it instead of the bow.  Too, when we were in port in Bayonne, there was no place to take a decent photo of the ship.  It's huge, so one needs a fair distance!  For perspective, there were 4950 passengers and somewhere between 1200 and 1500 crew members.  It's pretty much a village on the ocean. 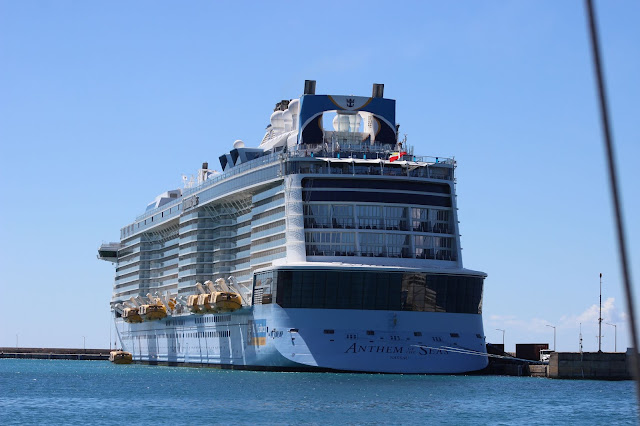 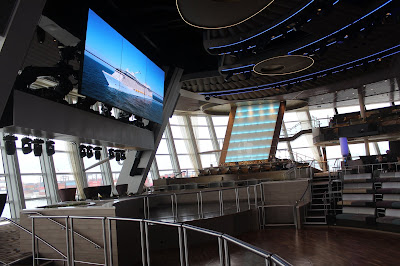 The room that looks out the massive windows is called 2-70.  They suggest the windows provide a 270 degree view...but I think that's a little generous.  None-the-less room was spectacular.  During the day it was a quiet area, with a cafe opposite for small meals and refreshments.  The room included a bar and lots of seating. 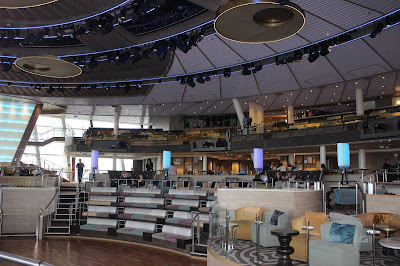 In the afternoon (sometimes and evenings (often) the room was used for various activities, including music and acrobatic productions.

The televisions that you see in the photo above, six in total, are 100 inches across.  They are attached to arms that can be used to move the televisions around.  I'm sure it is hard to picture but amazing to watch as they are moved about.

There is lots of seating, including the balcony above.  There are openings in the floor, in the boxes (one is just beyond the railing at the left of the first photo), and the ceiling that allow for the movement of musicians, actors, and others to be brought into the productions.  The cruise director Dennis explained that RCI spent $37 million on this room alone.  I'll believe it, with all the technology!  What I liked best was the view from the windows as I sat in one of the large chairs looking out. 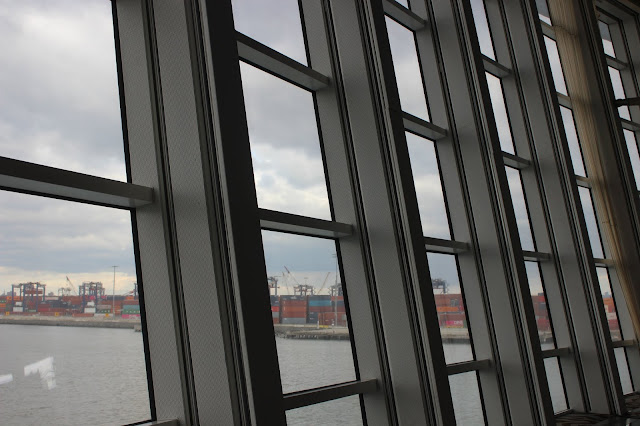 So the view while we in port in Bayonne wasn't that great.  It got better. 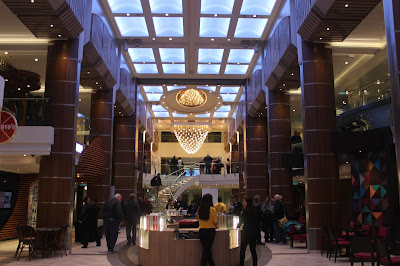 Decks 4 and 5 in the center of the ship are open.  Along the walkways are various restaurants, cafes and shops.  In the center is the area where the "sales" took place on an almost daily basis.  I don't have a photo but consumerism was rampant in this area during any of the sales.  I must admit I took advantage a couple of times, purchasing a new watch (just checked the price on Amazon and I didn't pay too much), and a couple of t-shirts in the 2 for $20 sale. 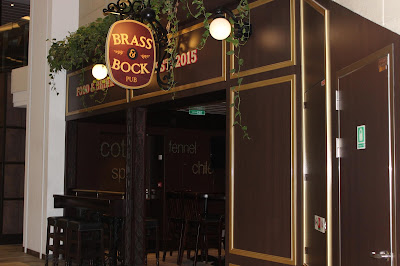 One of the restaurant is a version of an English pub.  I know they served food, though I don't recall seeing anyone actually eat there.  Lots of refreshments were served though, especially during NFL games.  A large number of the passengers were from the north eastern U.S. states so the New England Patriots were a big draw! 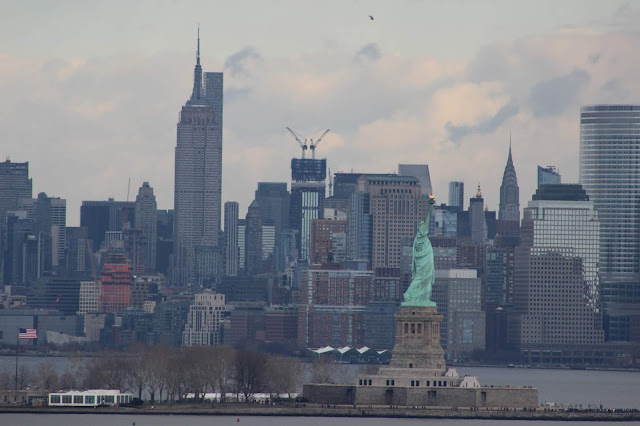 After a bit more of a wander inside the ship, I needed some fresh air so headed up to the highest deck 15.  There I ran into a fellow from our Facebook group who is well known for his photography.  I'll admit, I felt a bit intimidated!  But the view took care of any concerns. 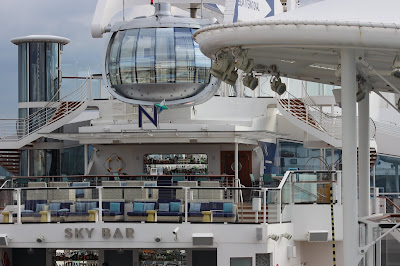 Up on the deck 15 above the pool is the Sky bar (a smoking area I believe so I didn't frequent it), and above that the sphere is the North Star.   This works like a crane in that the sphere is raised above the ship either at sea or where permitted in certain points.  The North Star holds a dozen people including the operator and provides an incredible view of the ship and beyond.  No, I didn't try it...to afraid of heights to even consider it!

On this level was also the Sea Plex, an area with bumper cars, a basketball court, a flow rider (for surfing at sea...seriously), and other activities.  Again, I did not partake.

But I did partake of lunch at the Windjammer (which I'll refer to from now on as the WJ).  The buffet is large and in addition to the interior tables, there is an aft outdoor seating area.  You'll note in the first photo with the flag which I've captured below.  This would become one of my favorite places to enjoy a meal and the view. 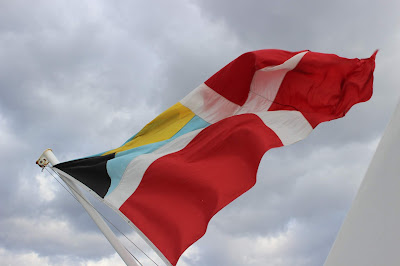 I'll end the post at this point, and take up again tomorrow with photos and description of my stateroom and the rest of the first day on the Anthem.  It was a busy one!

Posted by Maebeme at 17:31
Email ThisBlogThis!Share to TwitterShare to FacebookShare to Pinterest
Labels: Anthem of the Seas, chance meeting, Embassy Suites, shopping, vacation