What's up with the weather?

My brother sent me this the other day:

I believe we've reached second winter as we've definitely had a bit of fool's spring.  Earlier this week my cross street neighbour's lawn was clear of snow.  On Thursday, not so much!

I shovelled about two to three inches of the stuff, heavy wet snow!  Friday our temperatures soared to 11C (52F), and when I woke up Saturday morning, it was still 1C, just above freezing. And the neighbour's lawn has no snow again. Finally, on Sunday we had more snow, about 1/2 inch or so.  Spring of deception, perhaps?

Most of the week has been taken up with curling and crocheting, though I did manage to pull nails and remove wallpaper in the spare bedroom. I used the last of my Rona gift cards to pick some drywall compound to do a skim coat as there are some dents and larger holes in the wall.  Some of it was damage from removing the chair molding, a lot was damage covered up by the wallpaper.  The family before has had foster children and I'm assuming some of it was from various kids that used that room.  Who knows for sure?

I also picked up some supplies for painting.  I'll get the paint once I've got the room ready to go.  If you've read this blog for a long time, you may remember the fiasco with the paint from Rona that kept separating on me.  I got no satisfaction when I returned the can to the store - they suggested I allowed it to freeze and would not give me a refund.  After several e-mails to the head office and then to the store manager I received the gift cards as compensation.  I will NOT be buying the paint from Rona for certain.

Then, of course, because it seems that every week something around here breaks, I bought a new printer.  I had bought an ink cartridge replacement and when I went to replace it, a piece inside the printer broke off! So I bought a printer compatible with the cartridge - another HP all-in-one.  The store employee told me that it isn't unusual for this piece to break but hopefully this new machine will last as long as the original.  I believe I've had this one for about 5-8 years.

I needed the printer to print off my insurance policy for my June trip.  My travel agent, L is a gem!  She called me early this week to let me know Manualife was likely going to change their policy for cancellation as a result of the coronavirus.  I bought my policy on Tuesday, they changed their policy on Thursday.  So I'm covered in case the cruise has to be cancelled, and I bought coverage for my flight as well.  Unfortunately, the gal who was planning to travel with me has to cancel due to an underlying medical condition.  I'll be solo for this trip, but I'm excited as I know I'll get a chance to visit with J in England prior to the cruise!  We chatted today and she's going to meet me (and stay) at my hotel and we'll do a bit of touring together while I'm there.  I know how very fortunate I am.

For those who are thinking I'm crazy to consider a cruise during this pandemic, my thoughts are these:
I'm relatively healthy, just overweight, thus have no underlying health issues that would be a major concern.  Canada has not issued a travel advisory for UK/Europe due to the coronavirus, though if that happens I have the insurance.  As a result, at this point, I have no valid reason for cancelling and doing so would be an expensive proposition.  The cruise company is allowing passengers to cancel, with a partial refund and future cruise credits.  However, my flight would not be refundable.

On the ship, I know that the crew will be doing everything to keep the ship clean as they do every cruise.  However, I have been on cruises where norovirus has been an issue, though I've never been affected.  I'll avoid the buffet, where some passengers have a bad habit of picking up food and putting it back, wash my hands frequently, use my elbows on the stair rails, and try to avoid touching my face. The latter is probably the hardest for me.  I tend not to use the elevator, not are they often crowded, but I use the stairs to help stave off gaining any more weight.  I'll try to avoid large gatherings, and my off ship excursions will also be focused away from high numbers of tourists.

Is the risk of getting ill more significant on the cruise than at home?  Probably, because of the number of people who I'll encounter.  But it's a risk I'm willing to take because I think at some point we'll all be exposed to this virus.  Regardless I refuse to be trapped in my home, I'll continue to live my life and look forward to this bucket list cruise. 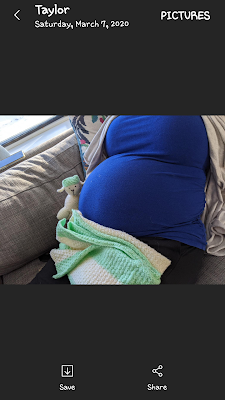 On a much more pleasant note, I received a photo from my cousin of her DIL with the blanket and toy I sent.  They love it, which is lovely to hear.

Baby will be born on March 27, with a scheduled C-section.  I hope I'll get another photo of the wee one with the blanket too.

I'm very near to finishing another blanket and will share a photo of that next week.  In the meantime our Saskatchewan team is playing the semi-final against a very strong team from Newfoundland. The game is very close, both teams playing well with the odd miss.  Fingers crossed our team makes into this evening's final.


One last photo, of a wee bird near the feeder this week.  It appeared to be injured as there were several loose feathers, and bit of excrement in the snow.  It did a bit of flapping of its wings but didn't fly off while I filled the feeder.  I did put a bit of seed down nearby, in case it was simply stunned and needed to rest a bit.  When I went out an hour or so later to check, it was gone.  I don't know if it had hit the sunroom window, but I found it odd that it had lost some feathers, so have to wonder if it hadn't tangled with a larger bird/predator.  I'm hopeful that its absence was indication that it survived and was able to fly off.

Have a great week everyone!

Posted by Maebeme at 12:10
Email ThisBlogThis!Share to TwitterShare to FacebookShare to Pinterest