Catching up and looking forward

Things were back to (almost) normal around here this week, with no curling to watch (until Friday).  I did manage to catch up on several television programs I enjoy watching.  Survivor is one of those - this season is particularly interesting because all of the contestants are previous winners.  Honestly I only remember four of them...the rest, if I watched the season obviously had no real impression on me.

A good part of the week was spent doing housework.  Laundry and bathrooms scrubbed down on Monday, vacuuming, a little rearranging furniture, a bit of sewing on Tuesday, and washing floors on Wednesday.  That afternoon I joined the ladies at the library for stitch and make.  I realized as I drove to the library, it was the first time, other than feeding the birds and picking up the mail, that I was out of the house since Sunday.

I did get out to the farm last weekend, no photos as proof though, and did a bit more sewing with L.  Upon closer examination, I discovered my machine has a one step button hole option, but no matter what I did I couldn't get the darn thing to make a buttonhole properly.  So I brought the machine home, read my instruction booklet and after some fiddling with stitch length, width, and tension I finally made a satisfactory buttonhole.  A second, not so much.  According to the instructions the needle should stop when the buttonhole is complete, mine does not.  But, if I switch back to a regular sewing stitch and then back to buttonhole mode, I can make another buttonhole.  I remember my mom's machine worked much better and much more easily but a memory is tricky thing.  I might just be making that up.

Thursday was shopping day.  Cat food, cat litter, a few groceries, a shipping box for the baby blanket, and I picked up my daughter's medicines.  On Friday, my brother and I made a trip to D's to drop off a piece of furniture he made for her so I'll drop those off at the same time.  He started making benches from old dressers and salvaged wood at Christmas, and so far he's on his fourth piece. 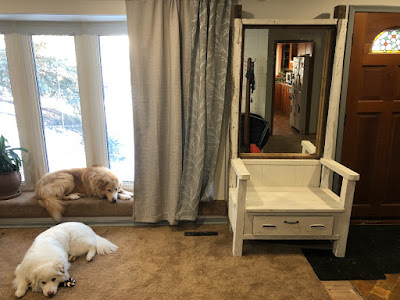 This is the first piece, made for his son for a Christmas gift.  The base is part of an old dresser, the rest is salvaged wood.  I love the mirror he added to the back!

If you've been reading my blog for awhile, you might remember that my nephew K and his g/f S found two puppies on the side of a highway last spring.  They brought the two of the home, intending to keep only one.  Ha!  They've both grown up since then. Rider is the white one, Whistler the brown.  They are sweet dogs. 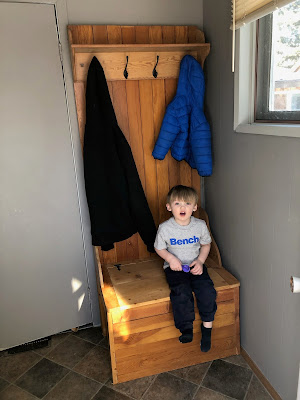 Here is the piece he made for my daughter. The back piece and most of the box are made from boards removed from their farmhouse kitchen ceiling. The shelf and top of the box are just plywood.  He's disappointed that the plywood didn't stain the same color as the other boards, but I think it looks great.  They have room for their coats, a shelf for her keys and purse, and there is ample storage in the box for seasonal footwear and other items like mitts and toques, etc.  I suspect a few toys will get lost in there too!  When I talked to D Saturday morning, Eli had filled it with shoes and boots. :)

After we returned to the city R was kind enough to help me remove the chair rail in the guest bedroom.  Actually I'd asked to show me how, and by the time I'd finished removing one piece he'd finished the rest of the room.  As we removed the pieces we discovered, a) it was cheap, cheap almost cardboard trim, and b) the old owner didn't bother to remove the wallpaper that was underneath.  In fact, now that I think about it he probably put up the trim to cover where the two pieces of wallpaper met.

I had removed the wallpaper some time ago, and repainted the walls.  The top portion was blue with white clouds, the bottom a pink/green gingham pattern. It was obviously a baby's bedroom at one point.

My plan is to remove the nails and wallpaper, fill the holes and repaint the room.  I think it's the first room I'll work on, as I'll move my bedroom into it when while I do the rest of the bedrooms.  It must be getting close to spring as I'm getting the itch to start fixing things up a bit more.  I still want to the list the house this summer.  Sadly, it seems prices have dropped even further based on current listings but I'm prepared to bite the bullet in order to start a new chapter in my life.

On Saturday morning, I ran out to the post office to mail off the parcel with the lamb and baby blanket.  It is so expensive to mail a parcel, nearly $20 for a small box!  I spent the rest of the morning, putzing around the house and catching up on television programs before the curling games started at 1 p.m.  It was a pretty lazy day after that.

Sunday I was awake early, 5:30 a.m., for no apparent reason.  The cats were still asleep and both slept for another hour while I tried to go back to sleep.  It didn't work as the winds were howling.  We had a storm blow through last night with winds up to 70 km/h (45 mph) and snow.  When I looked out this morning, we didn't get much snow but what came down was blown around.  I won't need to shovel though as we're forecast for another day of above freezing temperatures tomorrow.

It's another full day of curling, three games over the course of the day.  I'll get a few things done between ends, dishes, cat litter, feed the birds and so forth.  While the games are on I've got another blanket on the go.  This time a granny square which I may regret.  I'm not following the pattern exactly and will need to make some modifications so we'll see whether I'm smart enough to figure it out.

Have a great week everyone!  Hope the sun is shining where you are.
Posted by Maebeme at 10:23
Email ThisBlogThis!Share to TwitterShare to FacebookShare to Pinterest
Labels: curling, family, furniture, grandson, housework, repairs, sewing, weather