I went for a walk this morning, taking along my camera AND a camera card. I did have to stop at one point to change out the battery, this time I was prepared.  When I got home I realized I'd take close to 90 photos, so although I've started this week's post I'll do this separately (and you won't see all 90 photos...sometimes the camera lens doesn't see what I think it will).
My route takes me through a small park about a block from my home.  Today I saw a bunny but it was smarter than I am, and while I got glimpses there are no photos.  This park is well treed and I noticed lots of branches down from the recent winds.  Once through the park, I reach a main street where I cross into another park.  It backs onto a school yard on one side and condo units on the other.  It's has less trees and I noticed the clover is blooming throughout.  I bet the bunnies are enjoying that...though if they were there they were laying low. Further along I noticed the city is allowing the grass in certain areas to grow tall.  Again, great hiding spot for the bunnies. 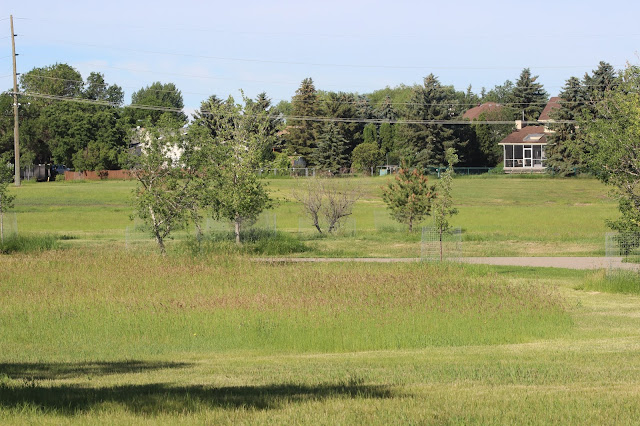 The path leads to the shallow creek with a bridge crossing.  It was here that I that I found the killdeer and I actually heard them before I saw them.  It's the first time I've seen them at the creek, and there were two pair! 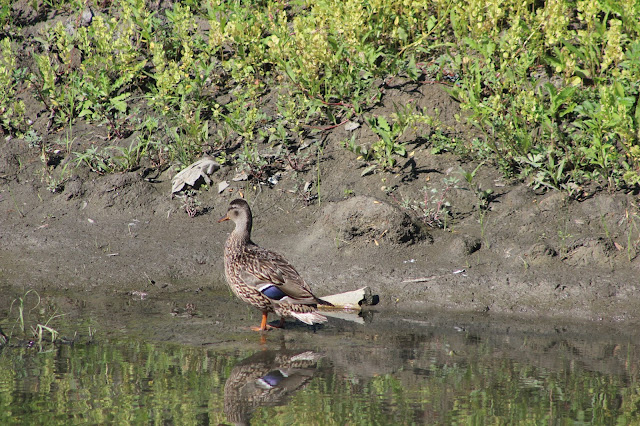 Edit - Okay, this is NOT the killdeer - I grabbed the wrong photo.  It is a duck obviously, a mallard. 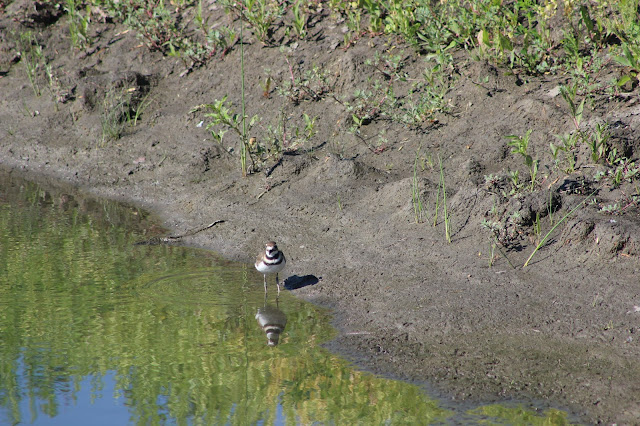 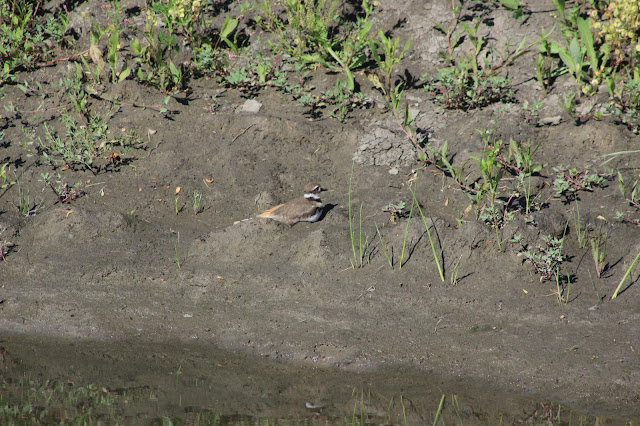 I'm not certain if this one was nesting or not. I suspect not, because most times they'll run like the dickens away from it to avoid it being seen. 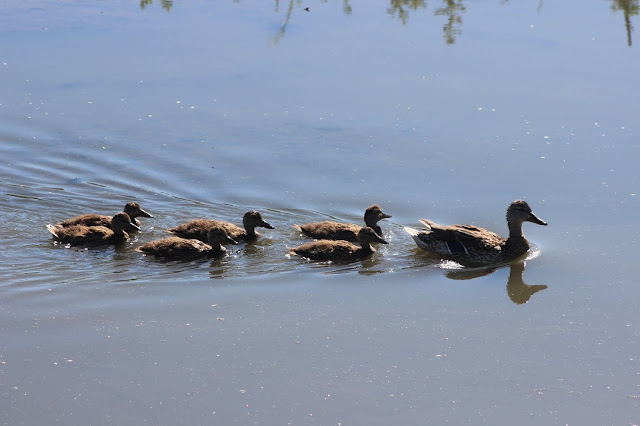 All along the creek were families of ducks.  Since they all looked pretty similar I won't share a bunch of photos.  I though this was cute though...mama is keeping all her ducks in a row. 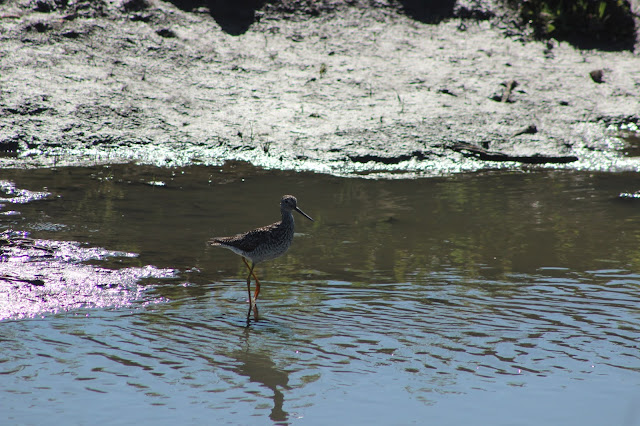 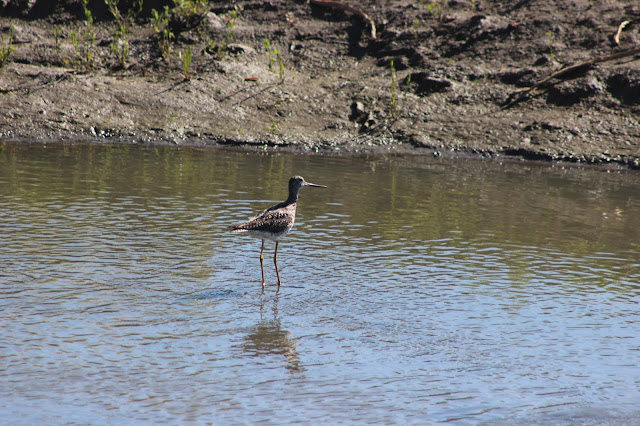 If my research is correct, this is a Marbled Godwit.  The first photo is a little dark, but I caught it in mid-stride, I think the second photo will be easier to make out the markings.  I've never seen one before, and what I found most interesting was it's movements, it kept bobbing it's head up and down, and the call, which sounded almost like "welp".  I suspect there was another nearby, perhaps close to where I was walking though it was hidden, because the bird seemed to be a bit agitated by my presence.
I left it in peace and walked on to cross the street to take me to Riverbend.  A walker passing by told me there were pelicans at the pond!  I haven't seen them there before, though have seen them elsewhere. 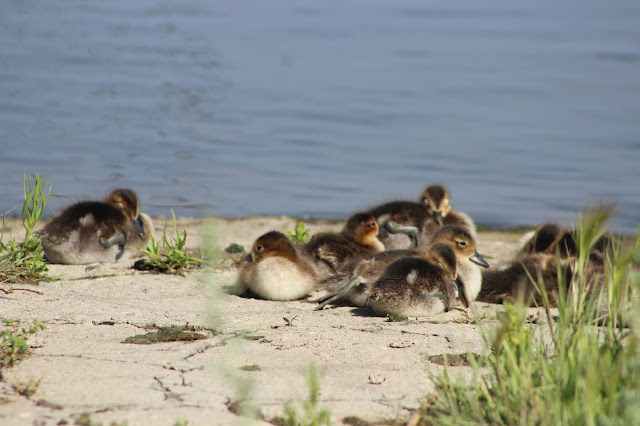 First though, I spotted this pile of ducklings.  Aren't they just adorable?  I had stopped to change out the battery, sitting at a nearby bench.  They couldn't have cared less that I was there. 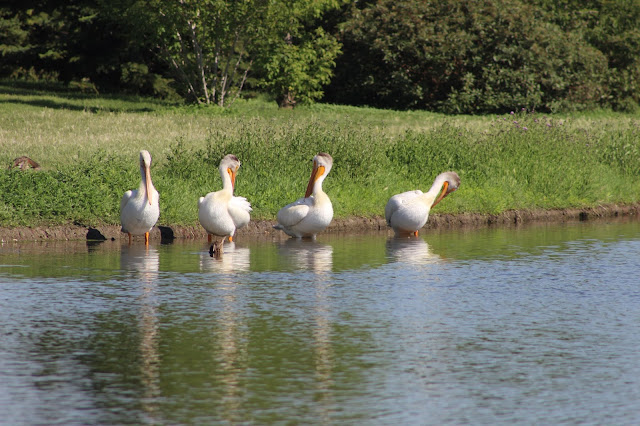 And here they are!  Another walker said there had been eight of the birds earlier this week.  She lives in a condo unit that looks out over the pond, lucky woman! I'd get nothing done in the spring I'd be so busy watching the action.  Speaking of action, I was fortunate to see the pelicans fly off. 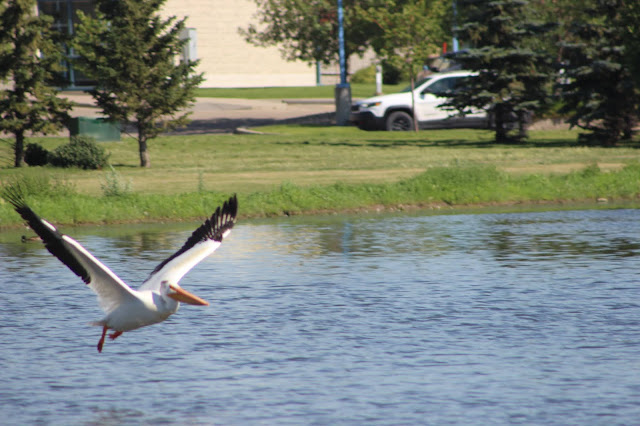 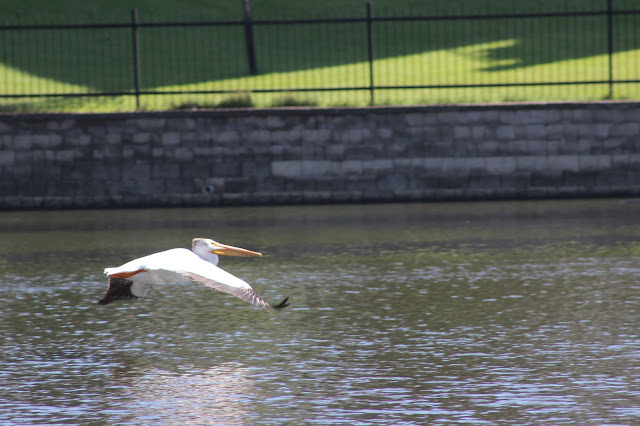 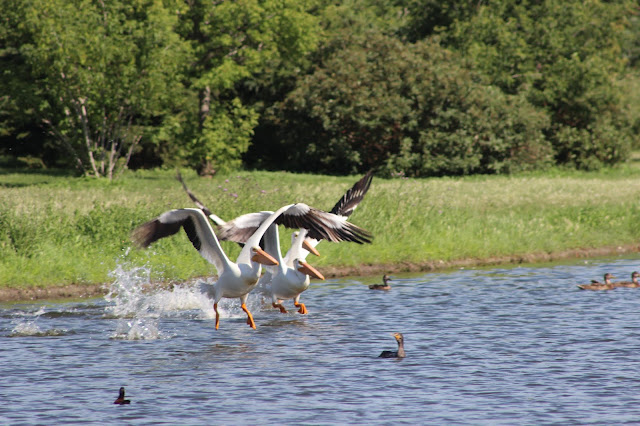 They look so awkward when the start off but are quite graceful in the air. 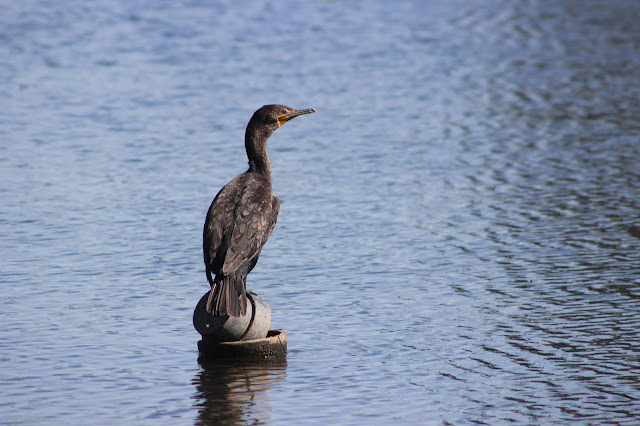 The cormorant was still hanging out there. (Thanks Fuzzy Gnome for identifying this one for me). It likes this perch but did go for a swim when the pelicans were flying overhead. 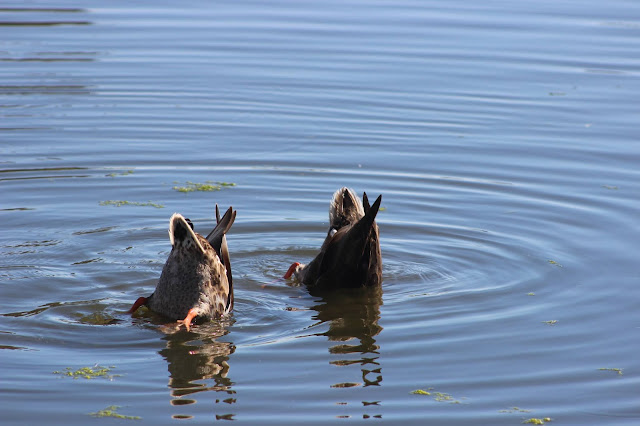 I always enjoy seeing the synchronized diving of the ducks.  There must be something good to eat down there. 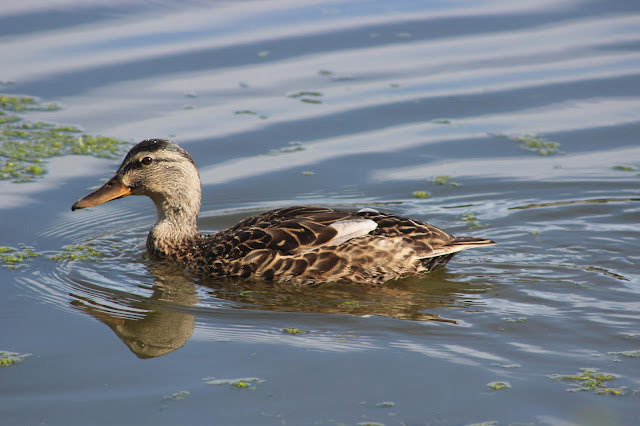 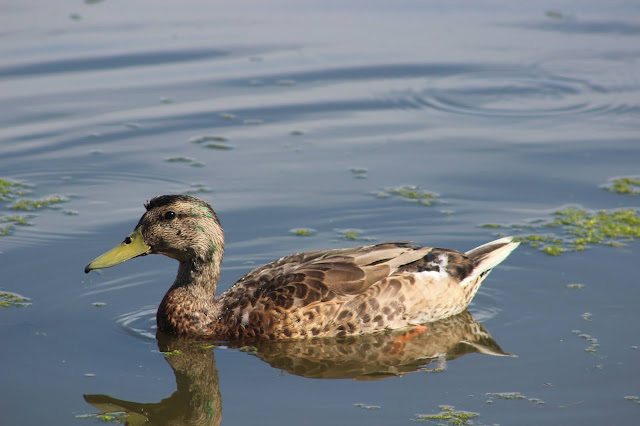 I'm assuming these are a pair; again based on my research I believe they are American Black ducks.  The male has the yellow orange bill, while the female has a dull olive colored bill.  I'm excited to see a new species.
I left Riverbend, took a right turn and walked along the neighbourhood streets to the small wooded park.  In the park were a couple of noisy crows. No photo though I did caw back at them a couple of times. 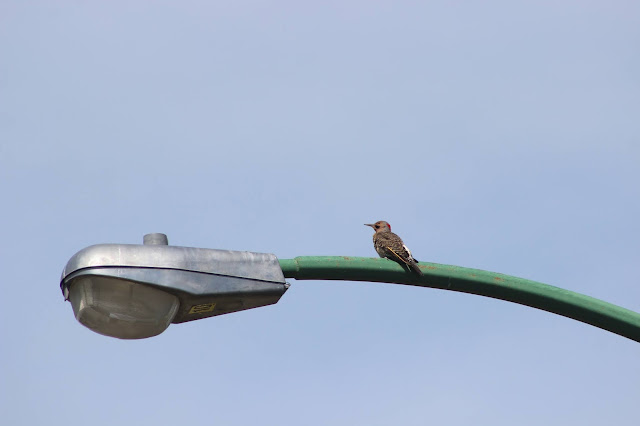 While I working on this post, I heard the sound of a different bird.  It was in my spruce but I couldn't see it.  A little while later I saw it fly over to the light standard across the street. It's not the best photo, but it's a woodpecker.
Not long after, I looked up to see a bunny hopping up my driveway.  When it spotted me, it stopped and hunkered down for a second, before it hopped under the spruce tree.  I think it's still there waiting for me to get out of the way so it can head for the backyard.
What a wild life I lead!  On that note, I'm going to head to the backyard myself to relax on the deck.  Maybe bunny will join me. Have a great day everyone!
Posted by Maebeme at 11:29
Email ThisBlogThis!Share to TwitterShare to FacebookShare to Pinterest
Labels: cormorant, ducks, marbled godwit, pelicans, walk, wildlifekilldeer