The calendar says autumn won't arrive until the 22nd but Mother Nature has another idea altogether.  I drove out to D's on Saturday, on a lovely sunny and warm afternoon.  We spent a couple hours outside cleaning up the front part of her yard, while her neighbour K was cutting back perennials.  Eli spent his time running between the two yards chattering up a storm.  When I asked K if he was bothering her, she said it was a treat having the little guy spend time with her.  Awww...that sure makes this G'ma happy.

Sunday morning, it was much cooler but with a promise of slightly warmer temps in the afternoon.  We headed out about 8 a.m. for a short walk, ending at the "red" park.

Eli enjoyed the swings, especially when his mom gave him under ducks.  Do you remember those?  I didn't until D showed me what she meant.  I guess this truly proves that I'm getting old(er).

We were back at the house just before 9, had our breakfast as both Eli and I had "so very hungry tummies", and then it was time to do some more yard work.  While I finished up in the front yard, D and K worked on the side yard.  They've decided that next spring, they'll have someone in to revamp the space between the two houses, with refreshed xeriscaping.  There is gravel there, but over the years weeds and some ground cover have grown in.  D wants to do the front as well - we'll have to see how far her budget can stretch.

We knew that Monday was going to be quite cool - especially early in the morning, and Eli was wanting to go for a drive so Sunday afternoon we drove to a nearby lake.  It was too chilly to go in the water, though one little boy got his feet wet before his mom and I could catch him.  The lake is down in the valley where the fall colors are beginning to show. 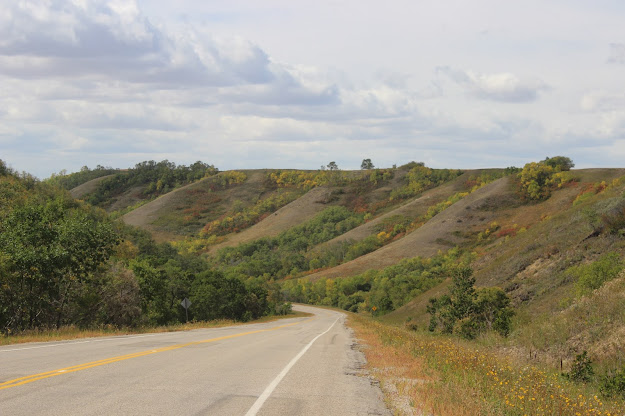 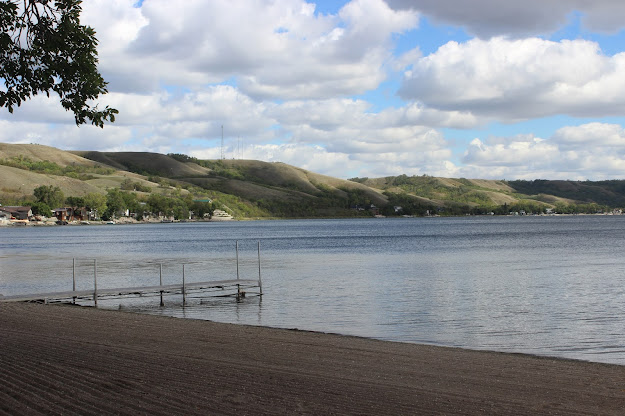 There are several docks, some with boats and Seadoos tied up, and the beach has sand and a bit of gravel.  There was a guy with his tractor harrowing the beach as we arrived.  There is also playground equipment, and even a snack truck - though it wasn't open when we were there. 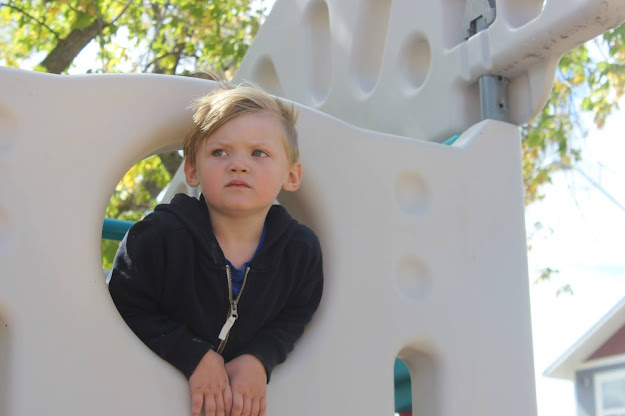 I'm not sure what Eli was thinking about in this photo but he doesn't look particularly happy.  It was probably about the time his mom said we needed to go.  It wasn't very warm, and there was quite a breeze - not the best time to be on the beach.  Still it was nice to check it out and I can foresee visiting again next summer.
Sunday evening, D went out to spend some time with a friend, while Eli and I hung out together.  We watched hockey, sort of, as much as one can with a three year old.  At one point he was sitting beside with his blanket, with one foot uncovered; he turned to me and said, look G'ma my toes are dancing.  His toes were certainly wiggling, and I love his imagination.
Monday was mostly an indoor day, as D tackled some chores while I played with Eli.  Later that afternoon we went for another drive, to a nearby larger community to pick up a few items and fill her car with gas.  Eli and I stayed in the car while she ran her errands.  Actually he slept and I played on my phone.
I left earlier than planned on Tuesday morning, as we felt it was too cold for a walk.  We'd had a light frost overnight at D's, with temps just below freezing, and a harder frost in the city.  I wanted to get home to check on my plants.   My yard must have its own micro-climate, as nothing was badly damaged, just some browning of leaves on the ivy.  The impatience container sits just outside the front door and I suspect the house shelters it - they are blooming quite happily.  Everything in the back yard was fine too!  The forecast for the next two weeks looks good, with mild temperatures, neither too cold or too hot.  I like this time of year, no need for a/c and the furnace kicks in for just a couple of cycles in the morning to take the chill off.  I open up the sun room as soon as I can, the cats enjoy their naps out there and the warmth makes its way indoors to heat up the house as well.
On Wednesday I got out for another walk.  Lots of ducks and geese to see on the creek and over at the pond.  The cormorants were there too, sunning themselves. 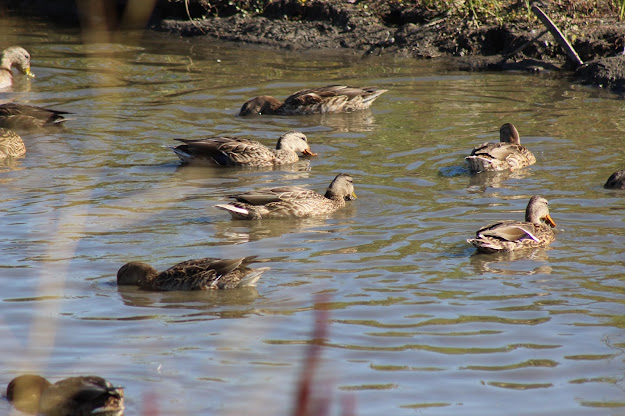 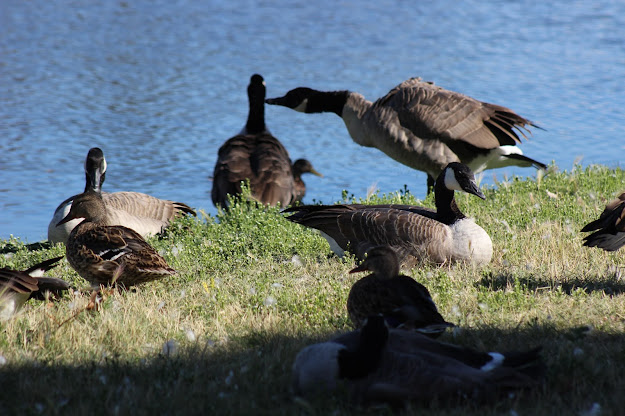 Ducks and geese sharing the sun!  I was going to call this photo "one of these things is not like the other."..but then I noticed there are two ducks. 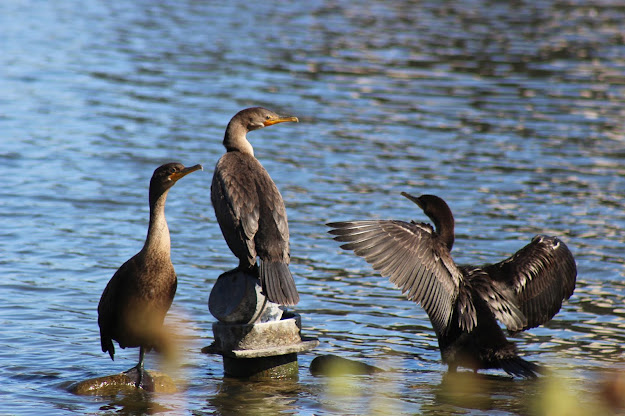 I find the cormorants fascinating.  They aren't pretty birds by any stretch of the imagination but they look graceful in the water and in flight. (Not that I often catch them doing either). After writing this, I saw a couple of the birds feeding in the water, and another flying the following day. On Saturday there were eight of them, three swimming and five perched! 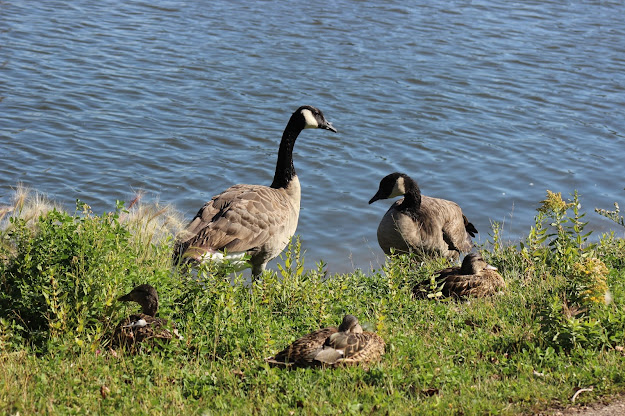 The sun was warm by this point in my walk, and I'm sure the birds were enjoying it as much as I was.
Back at home, I mixed up some banana loaf batter.  I'd tossed a banana in the freezer before I left for D's, and noticed I had several already there.  I took two out the night before and placed them in my large measuring cup to defrost overnight.  It's so easy to cut the stems off and squeeze the banana out of the peel.  No mashing required either.  I always make mini-loaves, two with chocolate chips for my son, and one with dried cranberries for me.

This week, I was able to finish the helmet liner/balaclava for my nephew and start working on a sweater for Eli.  Oh, and I took the crocheted poncho out to D to check the fit.  She liked it, and as it is definitely too small for my niece, she'll keep it.  Someone else liked it too (even though he's making a funny face).
She'll wear it with a black tank top or long sleeved tee and leggings.  I'm still not impressed with the pattern as I followed it exactly, my gauge was correct, and it did not end up with a dress length...unless the wearer is 3 1/2 years old. I'll use what I've learned when I make the next one.
It warmed up quite a bit in the afternoon on Thursday and Friday.  No heat was needed in the morning either.  I did turn on the a/c on Friday because it the house warmed up a bit more than I would have liked.  Silly me, I went for my walk on Thursday afternoon and wore my jeans.  By the time I got home I was sweating buckets!  I went early on Friday morning, and it was much nicer out there.

The cormorants had lots of company!
Back at home, I did a bit of yard work, watering and weeding and cutting back some dead foliage. I had visitors.

The robin kept an eye on me but stayed put in the bird bath.  I've seen several of them on my walks lately.  Perhaps they are on their way south.

The caterpillar, is another Sphinx moth caterpillar - this one is about three inches long.  I think I saw the other one a few days ago, slinking its way into the neighbour's yard. I was curious as to when these would cocoon, and read that in most cases they actually go underground, and larvae that start the pupae stage in autumn will overwinter and emerge in the spring.
Today, I'm catching up...on PVR'ed television and housework. There is lots of both.  I did manage to get a walk in this morning after watching a few programs and before tackling the kitchen.  The fridge has now had a clear out, the dishes are washed and put away,  the floor is washed and I'm back in my chair for a short break before I start on the living room. A week of dust is not a glorious thing to behold.  In the meantime, the chickadees are entertaining me as they flit about the evergreen out front.
Have a great week everyone.  Take care and stay well.

Posted by Maebeme at 12:18
Email ThisBlogThis!Share to TwitterShare to FacebookShare to Pinterest