Almost goodbye (to the cold weather)

Monday morning was the coldest morning to that point, with a temperature of -37C when I went out to feed the birds at 8:30 in the morning.  I won't tell you the wind chill because at that point it just doesn't matter.  Just know that my nose hairs froze in the few minutes I was outside. Usually the birds don't arrive at the feeder for several minutes after I've left the back yard, but there were several waiting in the tree in the next yard as I filled the feeder.  Inside the house I watched them from the kitchen window - they were definitely hungry and the feeder was empty by mid-morning.

I needed to run an errand for D on Tuesday so ordered my groceries for pick-up that afternoon.  I stopped in at Value Village since I was in the area and found a pair of Osh Kosh shoes for Eli for $5.99 - regular price is about $20. When I checked my receipt I realized I got the senior's discount so paid just over $4 for them!  They are gently used and should be good summer shoes for him.  Later that day I needed to mail an envelope so made a pit stop at the Dollarama and also Walmart for a few craft supplies. I also picked up Eli's birthday present, a bike helmet.  His mom bought a bike for him last year but he really wasn't interested, although he could reach the pedals he couldn't figure out how to make them go around.  This year, he's taller and I suspect he'll have no problem.  He turns four in under three weeks. I'm hoping to make a trip out to help celebrate as he won't be able to have friends - it's all weather dependent. 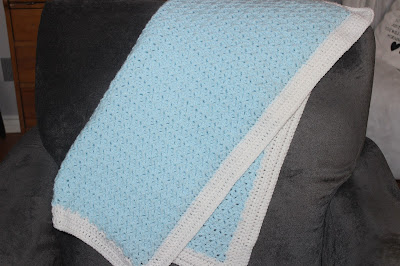 The rest of the week was about housework, Ancestry, staying indoors, and a bit of crocheting and knitting. I finished the baby blanket but didn't start on the sweater as I'd originally planned. My daughter asked if I could make her dishcloths - I've got one finished and another on the needles now.

The cold weather has continued through the week. This morning it was -38C; I continue to go to feed the birds first thing in the morning before the wind gets up.  It's definitely cold but not as bad as it would feel with a wind blowing in my face. I went around the side of the house to check the furnace exhaust.  I'm glad I did as there was ice from the exhaust stretching down to the ground, about 18-24 inches.  It wasn't blocked - good thing as when the exhaust blocks the furnace shuts down. Thankfully we seem to be near the end of the really cold weather; we'll be back to more seasonal temperatures by Monday.

Some more good news this week, our province announced that Phase 2 of the vaccinations will start in April, and my age group (60-69) will be eligible.  With the increased volume of doses expected over the next several weeks, I'm hopeful I'll be able to get my shot(s) sometime in April or May. It was also announced that they will be using pharmacies to deliver the vaccination.  I'm quite happy as I've received my annual flu shot at a local pharmacy and not had any issues beyond a sore arm for a couple of days.

Today is "Hockey Day in Canada", with three games throughout the day.  In between the first and second game I made dinner, caught up on blog reading and finished this post. Just in time for the next game and more knitting.