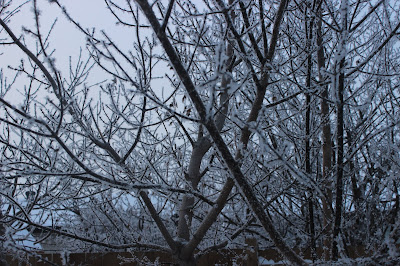 On Monday morning, when I headed out to feed the birds I took the camera with me.

It was a bit foggy out there and the trees were covered in hoar frost or perhaps rime ice.  The latter is formed when the fog droplets rapidly freeze. However, I can't tell the two apart so I'll leave it to others to decide.

Whatever it is, I think it almost looks like leaves on the branches.  So pretty and later, the crystals fall and sparkle as the day warms up. 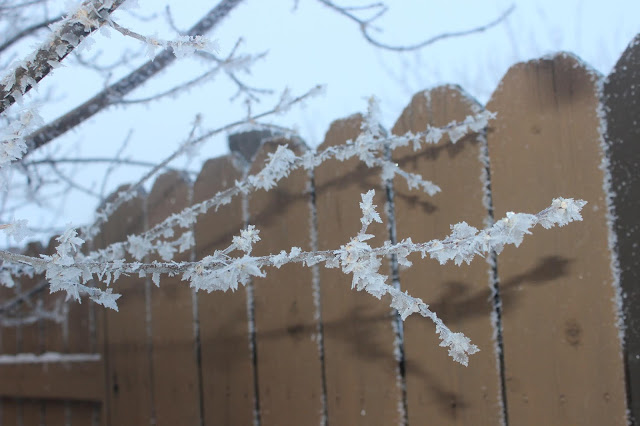 I made a couple of trips out of the house this week, first on Tuesday to Costco and Peavey Mart, and on Wednesday to the Dollarama and Walmart for my groceries.  I follow the Costco West fan blog - the author is in British Columbia, and sends out an e-mail each week of the items on sale (and often other things that he finds interesting) at the warehouse.  I went through the post and noted there were several items I wanted.  Overall I saved about $15 on the five items I purchased so well worth the trip.
We had some snow overnight on Tuesday into Wednesday.  Once the groceries were put away I went out to clear the driveway and sidewalks, as the temperatures were dropping throughout the day.  I woke to -7C (19F); by 6 p.m. the temperature was -17C (1F) with a windchill of -29C (-20F).  We were heading into a cold snap for the next week and I wanted it done.
The cold weather is always a good time to stay indoors and work on my crocheting and the family trees.  I've been working on my dad's side of the family.  There was an exciting bit of information - I thought - when I found that many trees indicate my 3X great grandmother Maria Claudia Stoney was the daughter of Captain Jack (John) Stoney of Beaufort, South Carolina.  However, I've come to the conclusion that this is not correct, as all of the on-line information suggests the Stoney's had only two sons who survived to maturity...no daughters.  So I've run into a dead end on her side as well.
I started another blanket with a pattern that was "quick and easy".  Well, it didn't work that way for me. I started and tore it back three or four times before I gave up.  The way I read the instructions the edge of the blanket grew on one side and decreased on the other, but the author mentioned you continued the rows until it was a square so....I just decided it wasn't what I wanted.  I found another pattern that is easy and definitely is quick to make up.  After that I'll use the remainder of the ball of wool from the last blanket to make up a little sweater - I went to toss out the paper wrap and noticed the pattern on the back of it.
My baby brother R turned 59 this week. I sent him a text that morning with a gif of a birthday cake covered in lighted candles. Of course I realize, I'll probably get a reminder later this year that I'm older than he is.  When I was a child I remember thinking that 60 was ancient, but now that I'm past that age I know it isn't. :)
We're into the truly cold weather today. When I went out to feed the birds this morning, the temperature was -33C (-27F) with a wind chill of -44F (-47F).  Even though I knew I wouldn't be out there very long, I bundled up well with a heavy coat, toque, two pairs of mitts, and my boots.  This is the cold when the snow squeaks when you walk on it.  It's a sunny day though and I can hear the birds calling to each other in the spruce tree out front.  I'm grateful for my comfortable, warm home and quite happy to have the ability to stay indoors.
Have a good week ahead everyone!
Posted by Maebeme at 09:33
Email ThisBlogThis!Share to TwitterShare to FacebookShare to Pinterest
Labels: cold, crochet, family, frost, shopping, weather