The week started out cold, so very, very cold.  Mornings were around the -30C (-22F) range and warming only a couple of degrees during the day.  And it was windy too, which made it feel much colder! I bundled up each morning to feed the birds but avoided the outdoors as much as possible the rest of the day.

I ordered groceries for pick-up at Walmart on Wednesday for a just a few items, including more birdseed, and stopped at Safeway where I found packages of chicken breast on sale, buy one get one free.  Since I no longer use the large freezer I only bought the two packages, with four chicken breast for a total of $8.28. I'd gone in for lean ground beef - I cringe at the price $4.99/lb. but it costs what it costs these days.  With a stop at the drug store post office to mail a package to D, I finished my pick-up at Walmart and was home in less than an hour.  It was a balmy -23C (-9F) at that point.

I've been doing a bit of decluttering this week, I've tried to pinpoint an area to focus on each day with some success.  Two years ago, when I retired, I spent a good 6-8 weeks going through the entire house.  This time I'm focusing on those items I kept that I haven't used in that time period.  In the front closet I found three coats, one of which I've never worn, that will be donated, along with a pair of sneakers, also not worn.

In the living room I went through various drawers and the desk. There wasn't as much items that weren't used, but there were items that weren't where they ought to be.  What I thought would take 15-20 minutes actually took an hour and half.  No wonder I can't locate things when I'm looking for them. From the spare room closet I let go of a couple of blankets that haven't been used.  However, the linen closet defeated me and I've decided to leave it until next week.

We've been getting a bit of snow over the last couple of days, but so little it's hardly worth shovelling.  But I need the exercise and the fresh air so have been going out and pushing it off the driveway.  We even had a plow go down the street on Wednesday; it just scraped the top inch or so off the street and deposited it on our sidewalk.  Grrr! 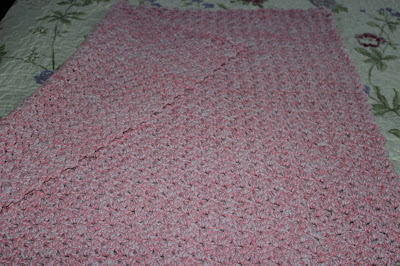 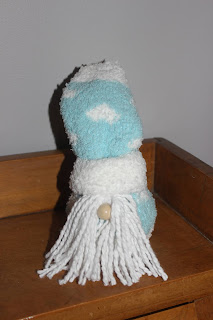 I did get a the baby blanket finished this week and started on another. This was a bulky yarn so didn't take a lot of time to put together.  I still almost a full ball left, so I'll have to find a small project to use it up.

Speaking of small projects, I made this little gnome from a pair of dollar tree socks. I've been watching more FB videos and saw people making these...my first thought was nah, but they grew on me.  I should have turned the sock on top the other direction as the hearts are upside down.  It's a nod to Valentine's day but I suspect a certain little boy will want to play with it.

A lot of my idle time has been spent on Ancestry.  In my research I discovered that a woman I worked for several years is a relative.  Her mother and my grandmother were first cousins, although her mom was closer in age to my mother.  I made the connection when I was reading her mom's obituary and saw my co-worker's married name.  We have a mutual friend, and I was able to confirm her maiden name with L. Someday when things are back to normal, I'll reach out to my previous co-worker to share the information.

I've been working on my dad's history over the past couple of days.  His mother's family is almost a complete mystery once I reach her paternal grandparents. I had found baptismal records for the three children but little else.  After a bit of guesswork on birth years, I found her grandmother's death certificate indicating she'd passed away at the age of 42 in childbirth with their fourth child. This led me to the discovery of the grandfather's second marriage two years later.  So I have something to build on and perhaps unlocking that information will be the key to figuring out when they arrived in Canada and identifying other family members.

Tomorrow marks two full years since I officially retired.  It hasn't been exactly as I anticipated, and in many ways, it's been better than I would have thought, despite the current pandemic.  I've discovered new interests, spent more time on those I enjoyed, and have been able to see my grandson both in person and virtually.  While I miss going out with friends and family and especially travelling, I've definitely saved money.  Those funds I can put into the house or just save for the future.

Take care everyone, stay well and have a wonderful week ahead.