Herstory - Annie May A.

I've been spending a lot of time Ancestry. I've written up a summary my grandmother's life, scanned some photos I found in a couple of albums and posted these for my cousins and one sibling on FB.  She had an interesting life, but as I'm continuing to do the same research with each of her parents, grandparents and onward, it is her mother's/my great grandmother's story that has touched me the most.

Annie May A. was born in 1878 in what was then Canada West.  When Annie May was just two years old, her sibling George passed away at the age of 5 weeks; when she was four her mother died.  Harriet Louisa was just 25; her death occurred just 10 weeks after the birth of her youngest child (also) Harriet Louisa. It seems Annie May and her sister were separated as census data indicates she stayed with her maternal grandmother, Emma Susannah in Ontario, while her sister went to live with a paternal aunt in Manitoba.  Their father passed away not long after the move to Manitoba at the age of 31.  Annie May would have been nearly 8 when her father passed away. It's quite probable that she and her sister never saw one another again.

At 22 Annie May married and in the next twelve years she gave birth to eight children, the last one likely stillborn. Just six days later, she passed away too at the young age of 34.

Around 1902, while her children were young, the family moved from Ontario to southeast Saskatchewan, and then after 1906, they moved further west to the southwest corner of Saskatchewan.  I can only imagine the hardships she endured travelling cross country with two small children, then three more as they moved to the homestead. I do believe she had some help, as her in-laws also moved around the same time, but it must have been a herculean task.

I wish I had a photo to share with you, but sadly there are none.  My grandmother's photo album has a space where a photo once was inserted with a notation Dad and Mom #1, but it has long since been removed. I've sent a request to another direct descendant of Emma Susannah, with the hopes that she may have a photo of Annie May in her collection of photos of Emma.

I do have a photo of her mother, Harriet Louisa with her sisters, Mary Anne, and Emma. I assume they are lined up in order of their birth.  Harriet was born in 1857 and passed away in 1882. I would guess this photo was taken shortly before her death based on my guess on the age of her youngest sister. 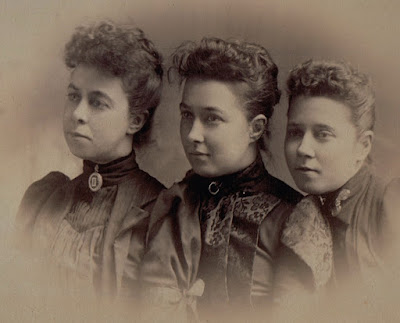 Posted by Maebeme at 07:00
Email ThisBlogThis!Share to TwitterShare to FacebookShare to Pinterest
Labels: family history, herstory