The first full week of January 2021 is in the books.  It's been a good week here with decent weather. I'll take it as my FB memories keep reminding me of the years that we had temperatures into the -30's (-22F). The forecast thus far, doesn't indicate temperatures dropping below the high teens (-18C/0F) for the next two weeks.  If I can't be somewhere warm, I'll take it! 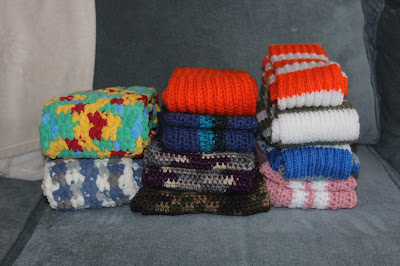 I cleaned up Christmas on Sunday, leaving out a few snowman ornaments so the rooms don't look quite so barren.  The last of the scarves was finished and I spent some time weaving in the ends, then they all got tossed in the wash to reduce the amount of cat hair that I'm sure was on them.  The photo was taken pre-wash, because once they were out of the dryer I put hem into a bag to keep them clean. I managed to use up a lot of leftover yarn, some I'd bought on clearance but in insufficient quantities to make anything more, and the rest from completed projects.

Monday was a busy day, if not a little scattered. It started with me cleaning the bathrooms, and when I went to get some cleaning products from the hall closet I decided it was a mess.  Somehow or another that led me to the kitchen where I decided the area under the sink also needed a clear out and a scrub.  Safe to say, by the time everything was pulled out, the shelves, interior of the cupboards scrubbed, things rearranged and put away the toilet cleaner had done its job too. :)  Oh, and since I had the window cleaner out to clean mirrors I carried on and cleaned the windows in the kitchen...and that meant I cleaned the bay window space as well.  I started a box of items to donate of various items that were cluttering up these areas.  Sometimes I wonder whether I have attention deficit disorder like my daughter but I generally manage to finish my tasks....at least eventually.

Tuesday I tackled the basement, washing floors in the laundry room, furnace room, and bathroom. The bathroom needed a good scrub too, although my son keeps it reasonably decent, his idea of clean and mine are slightly different.  All the while the laundry was doing it's thing.  That took most of the morning, so in between loads I worked on my jigsaw puzzle and read blogs.

It was grocery day on Wednesday, and I delivered the scarves to Awasis: A Place of Hope, a newly opened warming center here in the city. I had planned to donate to another charitable organization but one of their staff was diagnosed with Covid-19 recently so they've temporarily stopped donations. (Update: they re-opened on Friday).  I was surprised when I walked into the warming center to have my temperature taken, but I can imagine they need to take every precaution.

More housework was accomplished on Thursday. Sigh, it just never ends. But I did get into my craft room and start working on a few more pieces.  I've decided to use up the supplies I purchased for Christmas projects (or most of them at least), and tuck those away for a craft sale next fall. In addition I've got a couple of spring themed items that are for me.  I;ll admit I made a stop at the Dollar store on Wednesday and bought a few more items home. I'm really enjoying this creative outlet as it gives my hands a break from knitting and crocheting.

These are my finishes this week, or as finished as they are right now.  I'm thinking I might add some raindrops to the umbrella and hanger needs to be added to the Christmas picture. 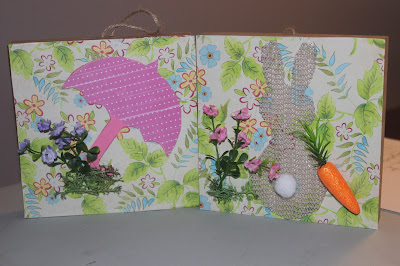 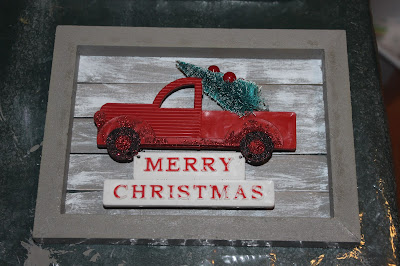 I've started another crochet project as well, though it got off to a rough start when I had to start over not once, not twice, but three times.  Perhaps taking the time off to craft messed with my muscle memory...or something.

I had a very quiet day on Friday, the housework was pretty much caught up so except for daily chores I relaxed, watched PVR'ed television and worked on Ancestry for much of the morning. Saturday was similar, and I can't tell you exactly what I did but it's early evening, I'm watching the Rams play Seattle (go Seahawks).  It was a colder day today, and while I did get out to feed the birds, I didn't stay out there very long.