It's been quite the week weather wise!  The warm weather (for us) continued through the week but Mother Nature sent us a wallop of nasty precipitation and wind on Wednesday and overnight into Thursday.  On Weds. morning we had rain which is absolutely bizarre for January, followed by freezing rain before the temperature rose to 6C (43F) late in the afternoon.

I'd gone out to get the mail from the community mailbox and took a skated half way down the driveway before I was able to stop myself.  I turned around and crept my way back to the house to put on my ice grippers.  Then I spent an hour chipping and scrapping the 1/4 inch thick ice off the driveway.  I'm glad I did because although the driveway was still wet it dried off mostly with the wind that picked up with the higher temperature.

Then on Thursday morning, I woke to find my front window almost entirely covered in snow and ice. It didn't appear we received as much snow as was predicted, but I went out to shovel anyway.  With the wind, the snow always blows into the door of my garage.  It had, in fact there was probably a foot of snow packed in there.  It only took about a half an hour to clear the entire driveway as the rest of the driveway had a mere dusting.

My front door got blown in too, though not as heavily.  Keep in mind there is a house to the right, and a large spruce tree in front. This area is fairly sheltered.

When the sun was up I went out back to feed the birds and discovered that the older section of my back fence has blown over into the neighbour's yard.  We'd been talking about replacing it just this past summer.  Later I saw him out in the yard, and so I went out back - he had someone there to brace the fence.  We lost two posts, they just snapped off, and this will be a temporary fix until spring or early summer when the posts and panels can be replaced.  The fellow doing the work said the winds reached 122 kph (75mph) the night before.

I did get out on Wednesday before the storm hit, got my groceries, ran a couple of errands for my daughter, and made a stop at the Salvation Army thrift store.  I hadn't planned but was driving by on my way elsewhere and I decided to stop in.  Glad I did, as children's clothing was on sale 50% off.  I got a few craft items, as well as a spring/fall puffer jacket and a pair of OshKosh shorts for Eli...all for the grand total of $9.98.

The rest of the week has been spent doing what I always do.  Housework, some crocheting, watching television, walking (in the house), and a little crafting. Here are a couple of the finishes from this week. 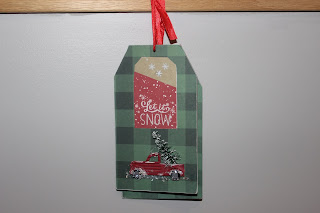 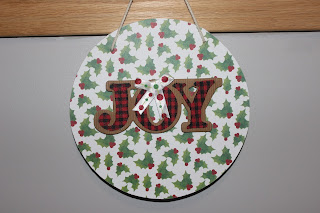 I made two of the gift tags, this with Let it Snow and the other with a tag that reads, There is Snow Place like Home.

I've got three of the circles, this one, another with a Sleigh rides napkin background and a third with blue background with snow flakes.

Yesterday I finished this heart. I bought the frame from the Dollar tree and used material from two old t-shirts (purple and white), along with two patterned pillow cases I bought at the Salvation Army this week. I think the messy bow at the bottom needs an embellishment so I'll probably try to find a large button for it. 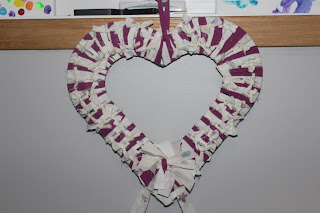 On Saturday I'm off to have a short visit with D and Eli.  I have a trunk load of stuff to deliver to her!  She bought a new high back booster seat for Eli that was delivered to my house as the company won't deliver to small towns. There's a ride-on suitcase she ordered from a local second hand children's store, and a bag of cat food I picked up at Costco.  I have pillows, her small crock pot, a calendar and the clothing that I picked up for Eli.  For those readers who are de-cluttering, this is my efforts for this week! :)

I've checked the forecast, it is supposed to be a decent day with a high of -1C (30F), mostly sunny and no snow.  I won't stay long, not only are our provincial health orders requiring limiting contacts to our own household, there is a possibility of more snow on Monday.  I should note there is an exemption for some households, including single parents, as long as they limit their contact to one other household.  Since we've both kept our bubbles small the risk is low. Sadly, that isn't the case for much of our province. We've now the highest contagion rate in the country despite that we have quite a low population density. I sure hope this trend is turned around soon.

Since I'll be away tomorrow, I'll post this early. Take care everyone, stay well and have a good weekend.