I had a lovely drive out and back on Sunday, the sun was shining and the winds didn't pick up again until I was nearly back in the city.

The trees were covered in hoar frost for the first half hour or so of the drive, but with the sun that disappeared quickly.

The visit with D and Eli went well.  She's been doing well keeping the house tidy so I didn't feel the need to tackle any areas while I was there.  Eli and I played monster, where we hid in his room and his mother pretended to be the scary monster who came to tickle him.  Later, we read a Valentine's book I'd brought for him and cuddled on the couch.  D and I watched a gymnastics event from the States while Eli played games on his I-pad.  That kid is more tech savvy than I will ever be!

Monday was a busy day as I got caught up on some housework.  I'd made arrangements for a local window company to come to the house to provide a quote for replacing the large bay window in the living room and two windows in my master bedroom.  He was scheduled for 11:30 so I hustled to get everything done before he arrived.  He did quick work at the measurements and recommended I not replace the bay window in the kitchen.  The woodwork around it is extremely oversized and we both have concerns that it could be removed without damaging the cabinets.  Since that window is no longer open to the elements as it looks out into the sunroom, it makes sense to leave it be...plus it saves me a couple thousand dollars.

On Wednesday I did my weekly grocery pick-up at Walmart, stopped in at Safeway for meat that was on sale, picked up cat food at Pet Smart, and ran an errand for D.  I was impressed, as I was only out of the house for a little over an hour.  In the afternoon, I had another company rep come by to provide another quote for the windows.  I felt he did a better job than the first of ensuring he knew what I wanted, made some recommendations, and explained things to me as we went along.  The quote came in on Friday and I'm going ahead with this company for those reasons and the cost was lower than the first.  We've tentatively scheduled the replacement for late April, early May, weather dependent.

That evening, my son made dinner, that is he ordered in pizza.  I was quite happy to not have to make a meal, and what I had planned could wait until the next evening. After dinner, our doorbell rang and when I went to answer the door I found a neighbour from a street over.  He had mail that had been delivered to his community mail box for me.  He explained they've been receiving items for me since we got a new postal delivery person.  He's has been putting them back in the mail slot for delivery.  A week or so ago I complained to Canada Post because a parcel had been marked as delivered, but I had not received it.  When I mentioned that to James, he said they had received it, and the next day the CP employee arrived at their house to retrieve it.  So that answers that mystery of where it went initially.  He's had several issues including an order of auto parts that ought to have been delivered that day but the worker said she tried and they weren't home.  He said he, his wife, and two children were home all day!  We suspect she tried to deliver it here and I was out on my shopping run.  The house numbers are the same and both street names start with the letter P.  But beyond that our last names are very different. Hopefully she'll be more careful in making the deliveries in the future.  Otherwise we'll both be contacting Canada Post to complain.

Thursday I had to run out to drop off some paperwork for my daughter. The stop was near the Value Village, so I had to stop in...of course I did.  I picked up a couple of skeins of yarn and a picture frame.  I just missed out on a couple of bags of basic Lego.  As I was just starting to look at the toys I saw a man picking up both of them.  Darn!  Eli has started playing with Lego, and it's great for his fine motor skills.  There was a Dollarama next door, so I stopped in there as well and picked up some spring flowers (plastic) It's still several weeks away in real life but I'll have some color to enjoy indoors.

We had more snow on Friday, just a 1/2 inch or so but it had melted some the day before so I spent some time chipping ice and clearing the snow in the afternoon.  Of course, it started snowing again almost as soon as I came indoors. :p  By this morning we'd had another couple of inches so I started my day going out to feed the birds and clear the driveway and sidewalks.  The temperature was about -8C (18F) but is expected to drop throughout the day with a low of -26C (-15F) overnight.  We've got a few days of cold weather ahead of us.  It's those days I'm most happy to be retired. 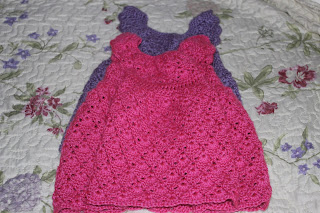 I'll keep busy with crocheting and working on the Ancestry research.  I finished a little dress this week, the pink one that matches the purple one I made earlier last year. I need to add the ribbons through the loops and those will be completed.  I also started another baby blanket. 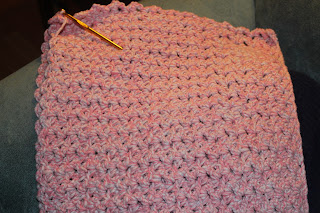 The research has taken me down some interesting paths.  It's clear that sometimes others have added in information that is likely not correct.  I've deleted some potential ancestors (going back to the 1500's) because the literature available does not support the assertion that a rather notable individual was the father of a known direct ancestor.  So I'll end that branch of the tree with the later individual as the documentation provides support.
Time to get some steps in and have a bit of breakfast.  Take care everyone, stay well!