Time flies when you're having fun, am I right?  I've been looking forward to this upcoming weekend for awhile now.  And good things come to those who wait...okay I'll quit now.  Friday was the start of the Canadian women's curling (the Scotties) being held in a bubble in Calgary, Alberta.  The tournament is quite different from the past events, with no audience except cardboard cutouts of fans who've paid for that privilege.  I thought about it, but at the price point it wasn't really feasible so I decided I'll just watch the television.

There are more teams than normal as well, with each province and territory having a representative, (Ontario has two with Northern Ontario and Ontario), plus Team Canada - the team that won the event last year and three wild card teams.  The latter were invited on the basis of points earned in other events.  Oddly enough, those latter three teams are all from Manitoba as is the current Team Canada.  Add in the representative from the province and I won't be surprised if, with five teams in the mix, a Manitoba team wins again this year.

The equalizer this year will likely be the fact that most of the teams have played very little this year.  While many of the individual players were able to continue practicing, many events were shut down due to Covid-19 numbers and, even in one case that I'm aware of was suspended due to a case discovered at the event.  In any event that's a total of 18 teams.  They've been divided into two pools with the top four teams from each pool making it into the next round robin.  Finally the top three teams from that grouping will play off, with the first place team (based on round robin standings) will go straight to the final on Sunday February 28.  The second and third place teams will playoff for the spot in the final.  With three draws most days until the playoffs, my days will be full!

I listened to a curling podcast last week with one of the players and a coach and the Covid rules are very stringent. The players and coaches will be tested every day and temperature checks will be taken prior to leaving the hotel and the arena.  The players are not allowed to leave the hotel or arena except to go to the other venue by the transportation provided.  The entire hotel is designated for the players, coaches and I believe the few media that are permitted within the bubble.  I've got my fingers crossed that everything goes off without a hitch. I know the organizers will shut it down if there are any concerns.

Two draws are in the books, and while there have been some missed shots so far the curling has been good and definitely fun to watch.  Even if our Saskatchewan team lost in the final end on the final shot in their first game. :(

Meanwhile I've been keeping busy this week with the regular housework, scouring Ancestry for relatives, doing a bit of knitting and a bit of crafting.  On Tuesday I did my weekly shopping because Safeway had a number of items on sale that ended that day including Nabob coffee for $9.99. That's about 50% off so a darned good deal.  I also needed bird seed, and made a stop at the dollar stores for a couple of items.

I'm tired of winter so decided I'd pretend it is spring, at least inside the house. I started with this bowl I had on hand. I bought it years ago at Winners, with a fall floral insert.  It was okay, but it was looking tired and faded, and I was tired of it.

I started by painting the bowl, then placed the dots and did two more coats of paint to cover everything to make it appear to be a hobnail vase. TBH, if I really wanted it to be a hobnail I would have needed to add a bazillion more dots.  As it was this was enough for me.

I used a piece of floral green foam, with a bit of moss on top, added some of the spring florals and greenery I've picked up on various trips to the dollar store to make a new insert.  You may notice there are a few Easter eggs in the mix.  I can remove those after Easter and add more more flowers...I have some yellow ones that would look pretty.  Since none of the items are glued in, I can change up the floral insert for the different seasons.

I removed the snowflake patterned tablecloth and changed it out for the blue check. It makes me happy and it certainly brightens up the kitchen. 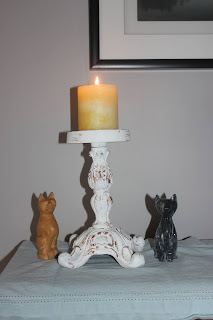 Of course, this led to more things being painted.  I have an candle holder that was given to me several years ago.  I never really cared for it, it was too dark and heavy, but I kept it because it was a gift.  I meant to take a before photo but forgot, but here it is after I finished painting and distressing it. I like it much better now!

While watching television programs or hockey this week I finished four dishcloths for D.  The baby sweater is next on the list of the projects but I realized that I don't have the correct needle size. Instead I started another baby blanket that I'll work on while watching the curling.

Speaking of television programs, if you haven't watched Big Sky and are a fan of crime dramas, I highly recommend it.  Unlike other programs things don't get wrapped up in an hour (and don't get me wrong I love Law and Order, Criminal Minds, and NCIS in all its versions) but this one has really caught my attention. There is always a twist I didn't expect and I'm always left wanting more.  However, it is a bit ugly in the story line and definitely creepy at times so I know it wouldn't be for everyone.

Since this post is about my happy place, which is currently my home and all the things I can do here, I thought I'd share a photo from a five years ago when I was in another happy place in the Caribbean. 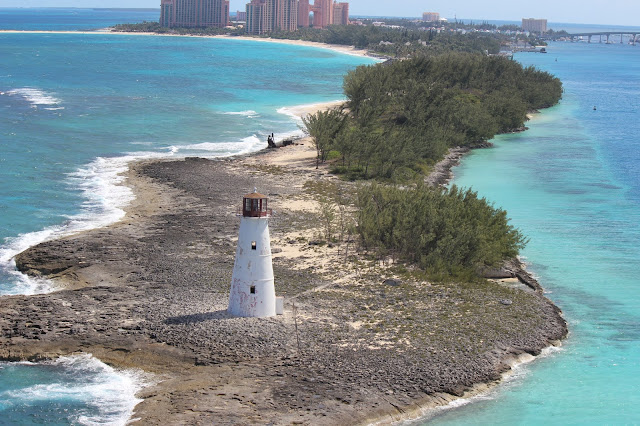 This is from the Bahamas, not one of my favorite ports, but I simply love the variations of the blue water.

Have a great week ahead everyone.  Take care and stay well!