Remember the ten days of high temperatures I wrote about last week?  Yeah, that forecast was wrong.  When the smoke from the forest fires blew in the temperatures didn't climb, but we had a couple of days of haze and smoky air so I stayed indoors for most of the time anyway.  I did manage to walk outdoors several evenings, and took a morning walk on Friday.

This was taken one evening when the smoke and haze was particularly heavy.

On another one of those walks, I encountered two families of geese making their way to the grass to feed.  While the youngsters are nearly the same size as the adults now, the parents are still very protective of them.  Hiss!

Thursday was a scorcher again, reaching 33C (91F).  I had gone out after dinner to read on the patio and while I was out there the sky clouded over and it got very dark very quickly.  I'd only been indoors for five or ten minutes before the first storm hit.  We had a downpour of rain and the wind picked up as the lightning and thunder rolled over us.  It was over in just a few minutes.  My son checked the radar and it appeared we wouldn't be getting anymore but again, the prognosticators were wrong.  Less than a half hour later, another storm came through, with winds up to 100 kph (60 mph) and lots of rain.  At one point it appeared to be raining sideways! All told we had between 1/4 to 3/4's of an inch of rain (6 to 19 mm.) depending on the area of the city. I'm pretty sure we had a higher amount as there puddles in the back yard.  Hooray, I won't have to water for a couple of days!  Well, except for those darned tomatoes.  In containers they inhale the water.

It certainly cooled things down. In just over an hour it went from 32C to 21C (90F to 70F).  Overnight it cooled off even more and I woke to just 12C (54F). The storm also took care of the smoke and haze and Friday was a beautiful day, sunny and warm.

I headed out about 10 a.m. for my walk to the creek and pond.  Again, I considered driving somewhere else to walk but I wanted to check the water levels. 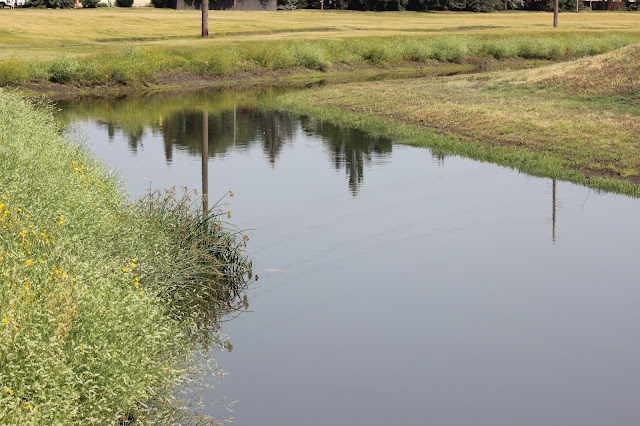 It may not appear that way to my readers but I can assure you the water level is significantly higher than it was just a few days ago. The city has been out and mowed the grass in the park as well as the one side of the slope down to the creek. 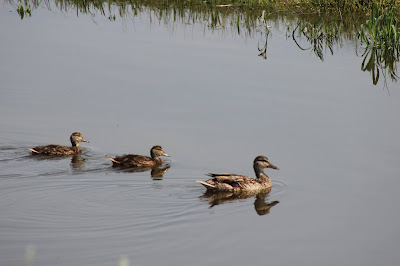 There weren't many ducks on the creek, though I was on the side that hadn't been mowed so I couldn't see down to the water very well. 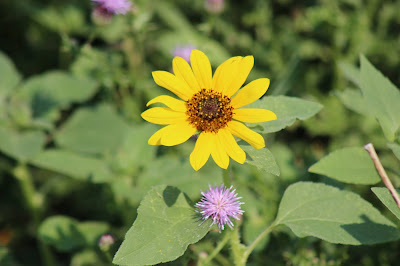 Over at the pond, the geese were up on the grass while the ducks were feeding.  The water was rushing into the outflow and the place where the cormorant often perches was completely underwater. 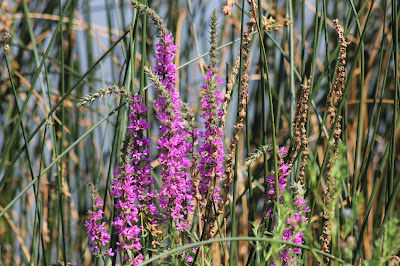 The flowers are blooming all along the path.  The blackbirds must nest in the reeds as I'm also spooking them when I take photos nearby. 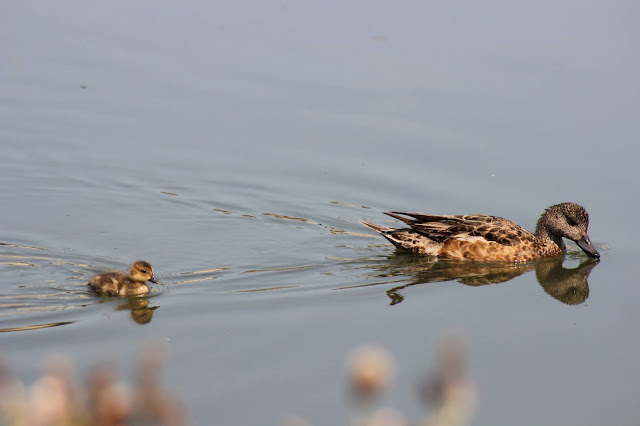 There are still a few wee ducklings at the pond.  There were three with this mama, but the other two wouldn't cooperate to have their photo taken.  They were swimming well ahead of their mother and sibling. 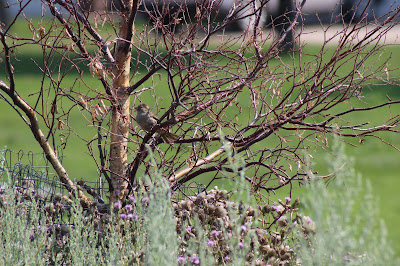 Some of the trees did not survive the winter but make interesting patterns with their leafless branches.  I believe that is a sparrow in the tree. 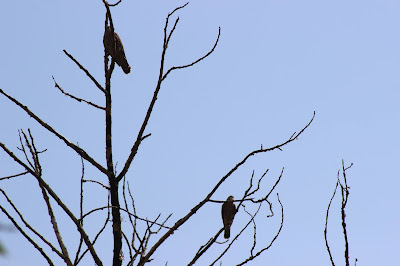 The sparrow are the natural prey of these, Merlin falcons.  We have six of them in the neighbourhood, the pair and their brood of four.  It's not a great shot, they were quite high in the tree in a neighbour's yard so I couldn't walk around to get a better photo. I understand this is the way of nature but I'd really wish they'd move to a different part of the city.
The rest of the week was spent doing all the things I do every week, laundry, dishes, cleaning cat litter, washing floors, cleaning bathrooms, cleaning cat litter, watering containers, vacuuming carpets, cleaning cat litter.  I did a little shopping too, at Fabricland and at a couple of thrift stores.  I've gotten through the last several books I bought at the Salvation Army store and found another three this week.

I'm continuing to work on the unfinished projects and actually completed one and was getting closer to finish another before starting on several others.  The cross-stitch bow I started before Christmas last year is finally complete. The only thing that was left to complete were the French knots, a stitch I've always struggled with.  I watched several videos to try to improve my technique....if you ever happen to make such a video, my recommendation would be to sloooooow down.  I played and re-played those videos a dozen times trying to get the threads in the right place before finishing the knot.  Don't look too closely at the photo; it's not perfect but as my Dad would say, "A blind man riding by on horseback won't know the difference."
Several years ago, the Fabricland store in east Regina closed down, selling as much of the product they could at reduced prices before hand.  I took the opportunity to pick up fabric, thread, notions and a couple of patterns at that time but did nothing with them, until now.  I decided to make myself a top with one of those patterns and a piece of the material.  Although I used to sew a lot, especially when my daughter was young, it's been some time since I've worked with an actual pattern.  On my last visit to the thrift stores I'd picked up a Halloween craft pattern.  Knowing I'd be rusty I made the decision to cut out the pieces for the top and a couple of pumpkins, sewing the latter first to get accustomed to using the sewing machine again.

The material I used for these was a remnant I had picked up at the thrift store sometime in the past year.  The leaves are felt from the dollar store, as are the ribbon and pipe cleaners.  I ran out of the beige ribbon so used the orange on the second pumpkin....it looks a bit odd but since these are just for me I'll live with them.  There is also a bat pattern in the envelope and I have a piece of black velvet that I think would be perfect.  I know a little boy who will love it!
The top is nearly 50% complete and I'll likely finish it next week sometime.  It's been fun deciphering the instructions and so far I haven't had to google any of the technical terms.  When I'm not in the craft room, I've been watching the Olympics (there are some really weird sports) and continuing to crochet my daughter's tank top.  That too, should be complete next week if I continue at this pace.  No promises though!
That pretty much wraps up the happenings here.  It's another lovely day with a forecast high of 28C (82F).  A good day to sit and relax on the patio with a good book.
Have a good week ahead everyone!

Posted by Maebeme at 11:35
Email ThisBlogThis!Share to TwitterShare to FacebookShare to Pinterest