I'm not certain where this week went but the time certainly flew by  The first few days were not particularly memorable.  A little shopping, housework, yard work, and several walks - one with the camera in hand.  Oh, and lots of Olympic games watching.  Maybe I do know where the time went. :)

On Friday, I had a visit with a former co-worker who continues to be a good friend.  She was coming to the city to spend the weekend with her daughter M, and since M had to work, D came to my house to visit for a few hours before they met up.  It was wonderful and strange all at the same time.  We've had pretty regular phone calls over the past couple of years, but this was the first face-to-face meeting with a friend in my home for many months.  Since we've both been fully vaccinated we decided it was safe to do so, and we even hugged!  We talked, we laughed, and shared stories of when we were working, about our grandkids, and life as we've known it since retirement.  I cannot explain how much those few hours meant to me.  She's invited me to drive up to visit her and I may just decide to do that one day.

Back to the normal, here are a few of the photos from my walk earlier this week. 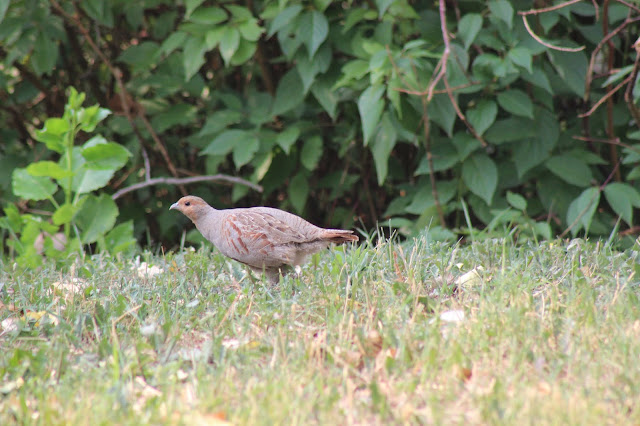 You likely won't recall but I mentioned sometime ago that there was a family of Hungarian partridges living in the nearby park.  This is one of the parents, the little ones were far too speedy for me to capture them with the camera. 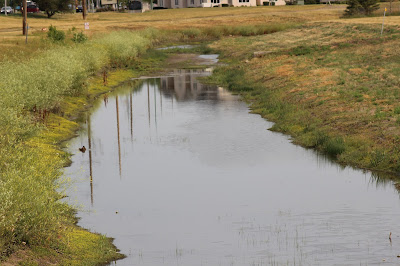 Sadly, the water level in the creek has dropped again. There were only a few ducks on the creek, and I didn't see the killdeer nor any blackbirds either.

These next two photos make me laugh.  There is a path that leads from the creek to a yard where I assume the family are providing feed for the ducks.  I spotted this duck trotting along the path heading back to the creek.  The grass is a fair height so all I could initially see was the single duck. 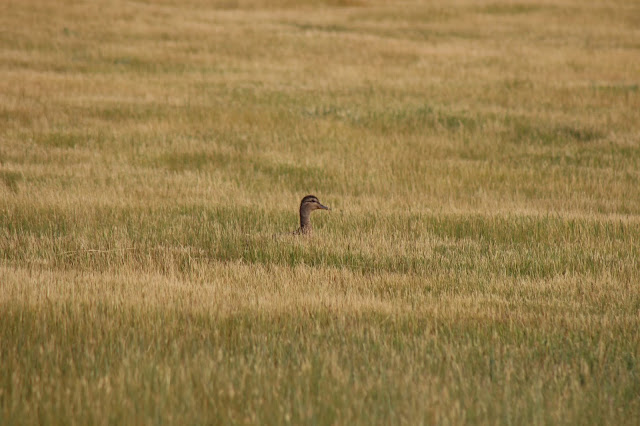 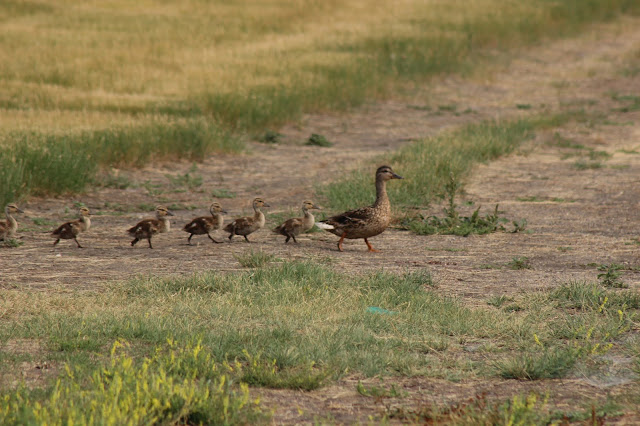 But she wasn't alone at all.  As they came out of the grass and crossed the path into next portion of grass on the side of the creek, I enjoyed the march of the ducklings. 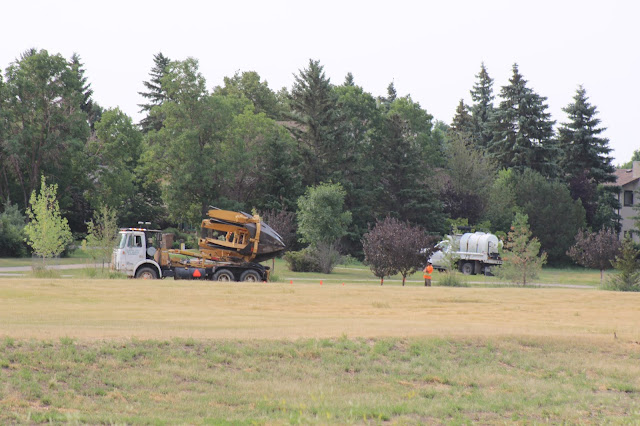 The city was busy planting more trees in the park.  There were three or four news ones already in the ground and the water truck was giving them a good soaking in.  I hope they make it through this heat. Two years ago, they planted a number of evergreens, most of which have since died. 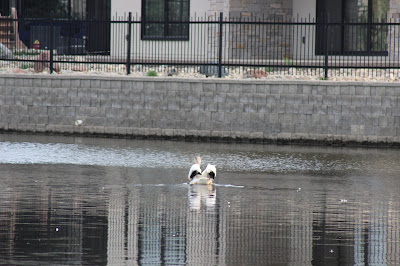 Over at the pond there were many ducks, several geese and two pelicans.  Okay, don't laugh, but my eyesight isn't the best so I wasn't sure what I was looking at. If you've ever wondered what a pelican looked like from the rear...this is it. 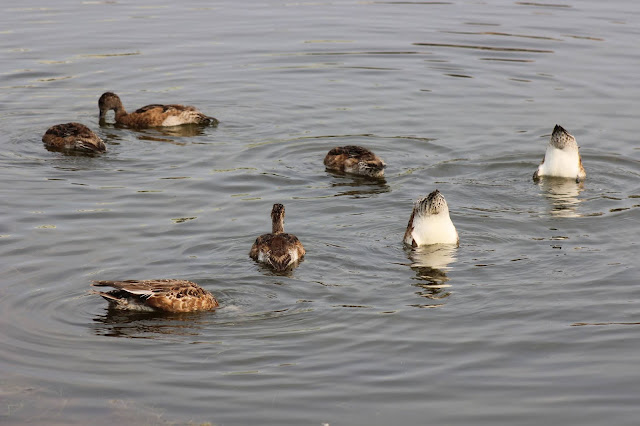 Speaking of rears, this photo was another that made me laugh. Those little white butts look so darn cute!

This next series of the second pelican illustrate it's feeding technique.  It looked to me as it crouched low in the water to be listening for somthing. 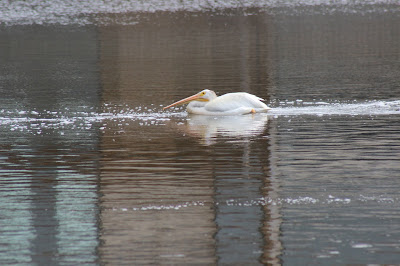 When it finds it's prey, it quickly spears the water with that long beak. 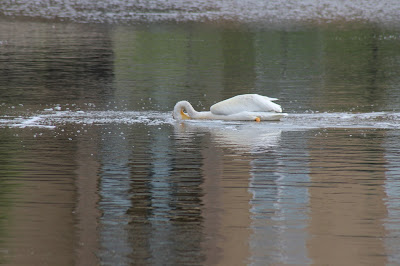 Then the head came and the bird swallowed what it had captured. I assuming it would be a frog or something similar as there are no fish in the pond that I know of. 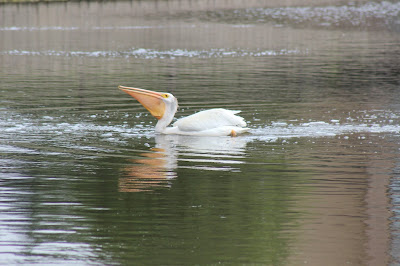 I've walked in the evening a few times this week, without the camera.  The rabbits/hares have been out in the force at that time of day.  I've counted twenty or more in the large open areas of the park.  There is clover growing there and it must be very tasty.
On Saturday morning, I headed out for a short visit with D and Eli.  She had her telephone appointment with her doctor earlier in the week; he ordered a medication change for her and I picked up the order on Friday.  Had I mailed them she wouldn't have received them until mid-next week due to the long weekend.  I haven't been there for a month so I was quite happy to make the drive.  However, there is no a/c in their house so one night's stay is plenty in the continuing heat.  (It been around the 30C/86F range for what seems like weeks now.) 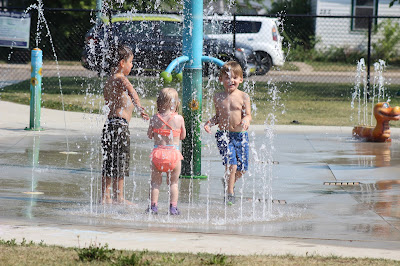 After a bit of housecleaning and laundry was accomplished or underway, we headed over to the park.  One of Eli's pre-K friends was there and he had a great time playing in the water with W and one of his little cousins. He and I returned to the park after lunch.  He didn't want to play in the water, but rather wanted G'ma to push him higher and higher on the swing.
Back at home we puttered around in the yard.  D mowed the back lawn, while I deadheaded and watered her containers.  I had a bit of water left in the watering can so I poured it over Eli.  He thought that was a great game. Then he pulled his plastic sled from the garage and insisted G'ma pull him around the yard on it.  Three times around the yard was the best I could do.  He was kind enough to let me sit and read a book while he played for a bit, then he brought his tablet out and sat quietly in a chair playing his games. 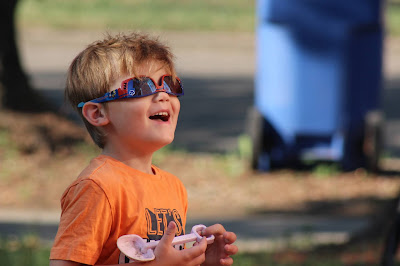 I planned to leave early this morning to avoid the heat but stuck around until D had mowed the side yard.  I did a little weeding, while Eli played. He requested and I agreed to three more times around the yard with the sled by which time I was worn out. He's heavy and pulling a sled on the grass is not nearly as easy as on the snow. I'm looking forward to their next visit in mid-August.  I don't own a sled. (Yes, he has his sunglasses upside down - he prefers to wear them this way.)
And here we are, at the start of August. The heat is forecast to continue, at least until mid-month.  Even so, the nights will get cooler and summer will start to wind down.  I noticed this morning my tomatoes are beginning to ripen on the vine.  I've got one small green pepper and a half dozen red peppers (still green) growing quickly.  The petunias are starting to look leggy so they'll need a haircut soon. The yard work won't end for some time yet.  Nor does the housework, which reminds me....
Have a good week everyone!