Not quite as planned

I hadn't planned to post this until tomorrow, as I had anticipated I'd be gone for most of the day today.  However, best laid plans of mice and men and all that, here I am.

A little background on the place I went to visit today.  Nicolle Flats Nature area is situated in the Buffalo Pound Provincial Park, in the Qu'Appelle Valley, about 90 kilometers or so from the city of Regina, and about 30 kilometers from the city of Moose Jaw.  The nature preserve is named after an early settler, Charles Nicolle.  The family homestead is accessible along the trail from the far end, which is where I started my adventure.

And an adventure it was, in more ways than one. I should mention that I often get lost when I first go to a new place.  That happened again today.  Before I left this morning, I checked online to be sure I knew where I was going.  I didn't print off the map, certain I would be able to find my way.  There would be signs, right?  Well, there were some but not enough to get me where I thought I was going.  Finally giving up on my spotty memory, I turned to Google maps.  With spotty internet service in the valley, I managed to drive a little bit further than I originally planned.  Since I didn't specify I wanted to go to the provincial park entry, Google maps sent me to the far end of the trail.  As it turned out this was a good thing. 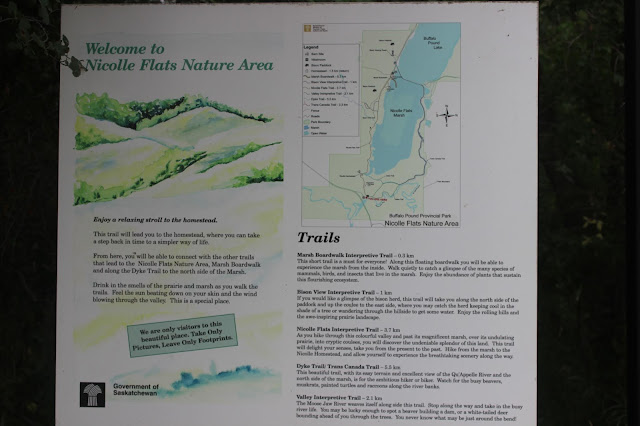 There are several trails that one can take - the one I started on took me to the homestead.  From there I looped down along the Dyke trail and cut across to the Valley trail to get back to the car.  It was about 3.5 kilometers in total.  I hadn't planned to do such a short loop but could not locate signage to direct me to the Nicolle Flats trail that would have led to the start of the trails off the homestead property.  Again, this was proven a good thing. 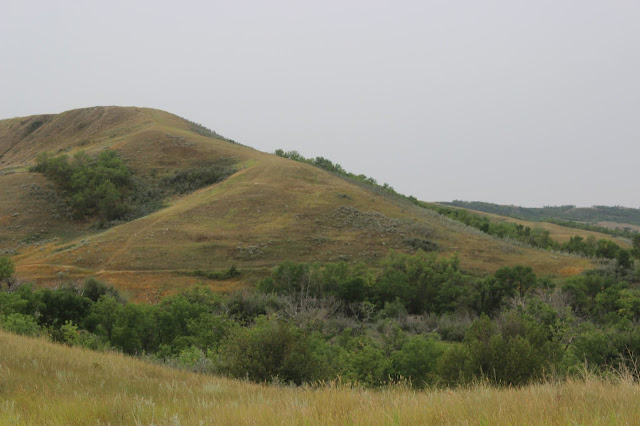 The first trail took me up a decent incline, where there were a couple of benches to overlook the marsh.  From there I headed further down into the valley to the homestead. 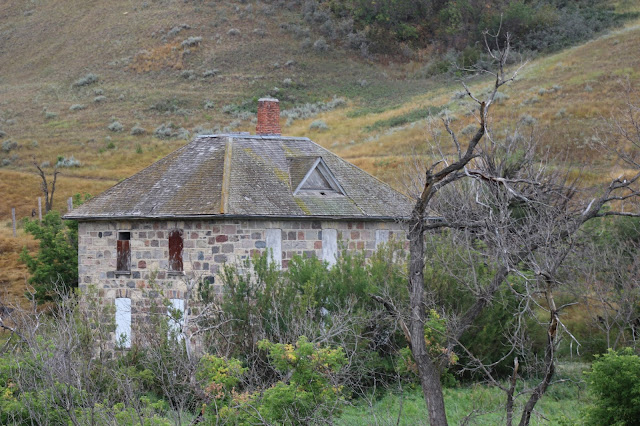 The information below indicates the homestead was settled on in 1903 and has had no human inhabitants since 1959.  The house is built of fieldstone, with each stone gathered by hand, then loaded onto wagons to be brought to the building site.  Another article I read revealed the stones were loaded into wheelbarrows and pushed up slanted boards to reach the higher floors.  That would have taken some brute strength! 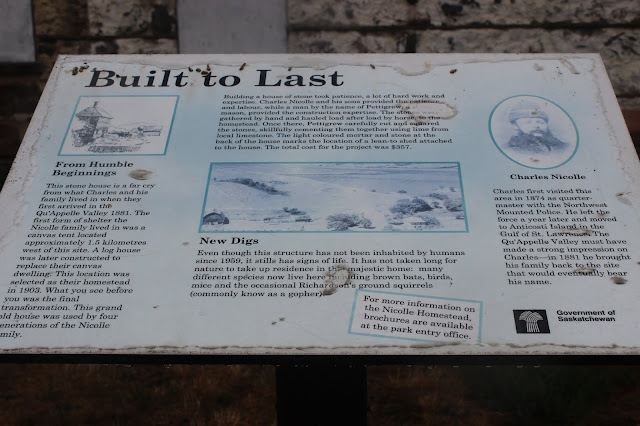 Also still standing is the foundation for the barn. 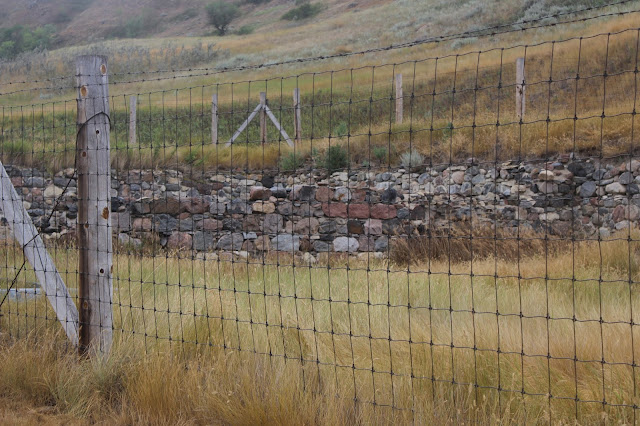 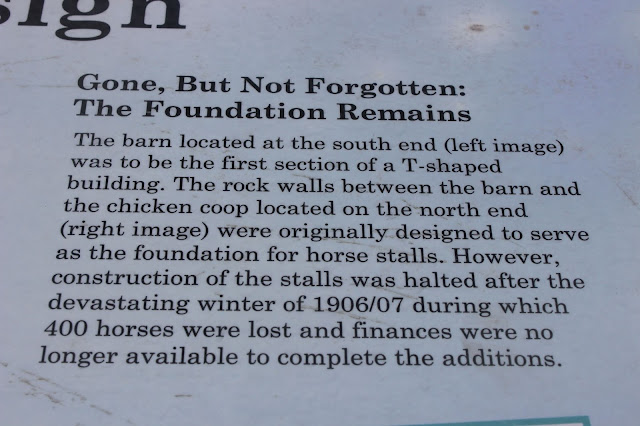 I wandered around the yard site for a bit looking for the path that would take me to the marsh and would eventually lead to the observation deck, but if there was a sign I could not locate it.  Instead I headed back on a different trail that went off in a similar direction as I had come.  I finished my shortened walk in about 45 minutes, which included the time I took to stop for photos and wander the homestead. 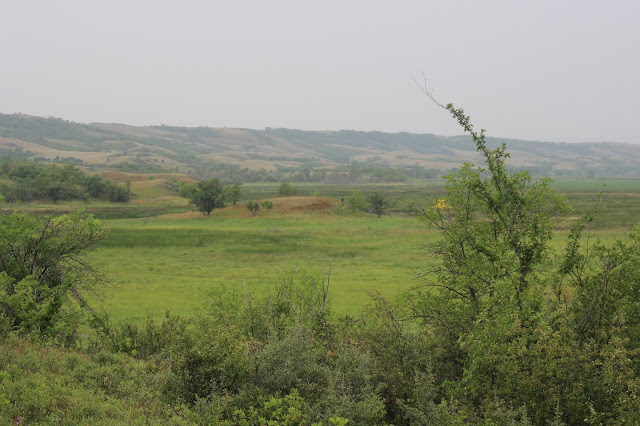 It looks wet in this photo, but it wasn't coming down hard at this point.  In fact, I quite enjoyed the mist. 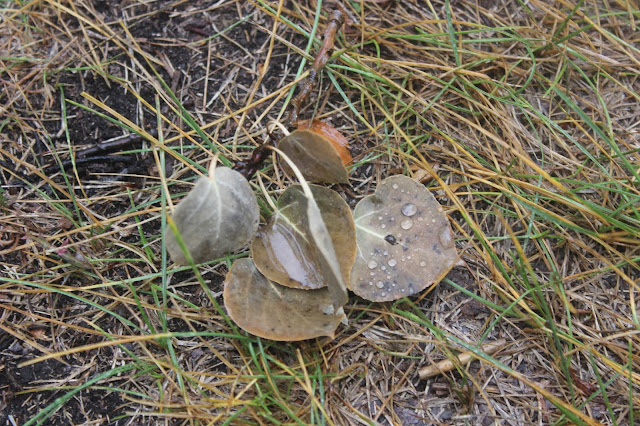 I realized I had to get to the provincial park's entry site, but until I got to the top of the valley I had no internet access.  With the directions provided to "Buffalo Pound park entry", I discovered I had been a mere 1.5 kilometers from my destination when my first request for "Nicolle Flats" resulted in a cross country tour.  Oh well, as I mentioned it was for the best anyway.
At the park I paid my entry fee, and got additional directions from the young man at the gate.  The road to the flats runs along Buffalo Pound lake for about 15 miles or so, before one reaches the dam and lake's end. Beyond that is the Nicolle Flats area.  I arrived with one more short detour - I went up a hill instead of straight ahead.  I blame that on the signage being hidden behind some bush.
Just off the parking lot, there are a couple of open air buildings.  One is used as an educational spot - I assume the park staff offer guided tours at some point in the summer months.  One is a gazebo like structure that overlooks the marsh. 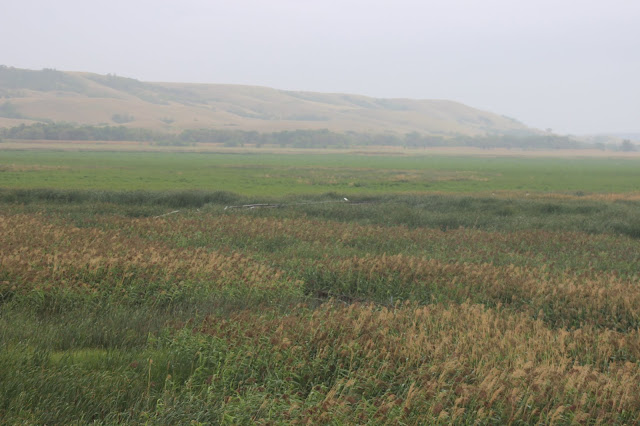 This it the view looking out over the marsh from the observation platform.  The white spot in the middle is a sign at the end of the marsh boardwalk. 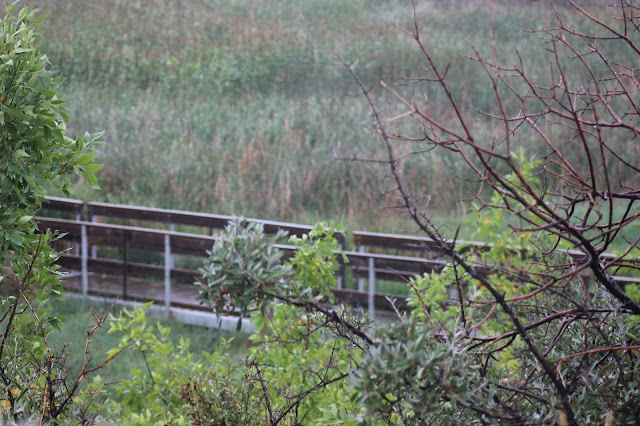 From the same vantage point, this is the start of the marsh boardwalk. 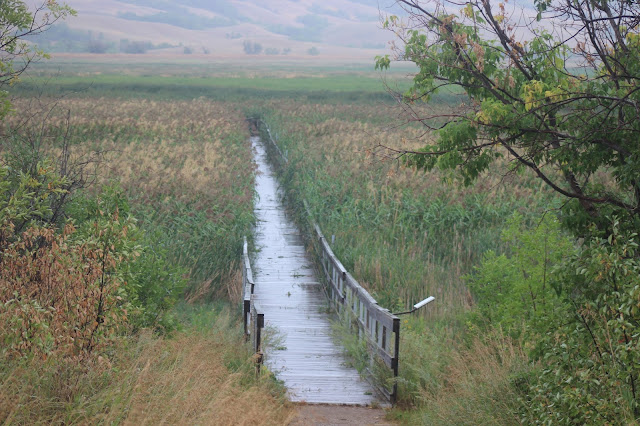 As I looked down towards the boardwalk, I initially thought it might be underwater.  It wasn't. 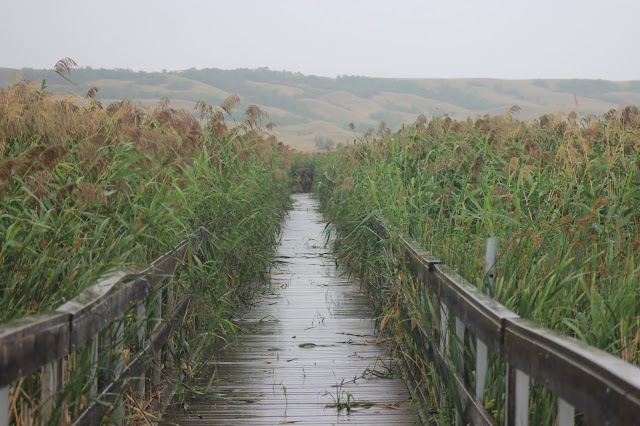 The reeds and cat tails grow tall along the edge, far taller than I am! 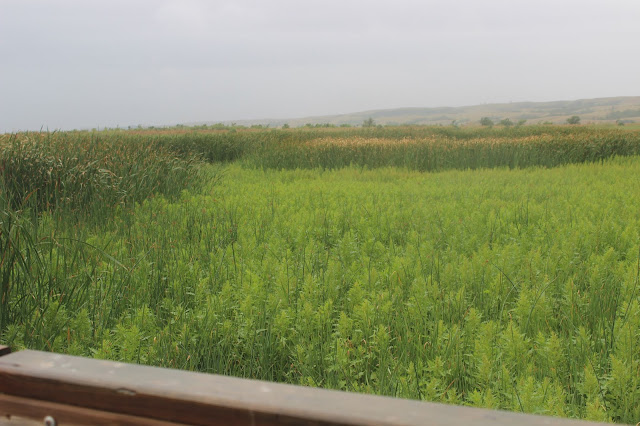 At one point there was an opening in the reeds with some shorter plants. 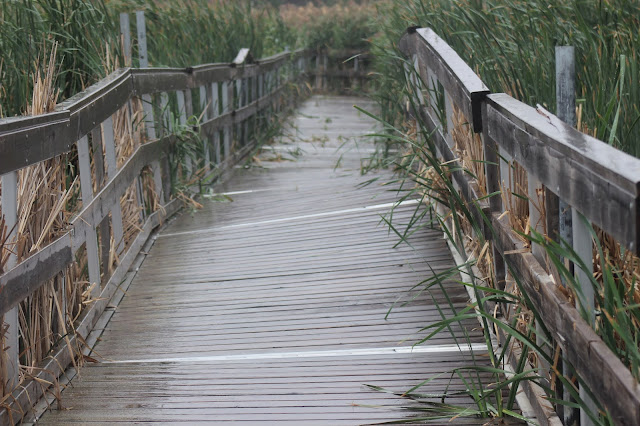 In places it appears that the boardwalk is being impacted by the shifting ground of the marsh.  These boards seemed a bit soft to me, but still sturdy enough to walk on, if a little bouncy.
I walked out to the end of the boardwalk, hoping to see some wildlife.  But with the rain I suspect most of the birds and other critters were staying out of it as best they could.  I should note I saw several hawks and one pelican but these while I was driving so there is no photo evidence.
When I got back to the educational building, the rain was starting to fall quite heavily.  I stayed there for about 20 minutes waiting for it to lessen or, better still, stop but it did not.  I abandoned my plan to walk the trail that would take me back to the homestead. 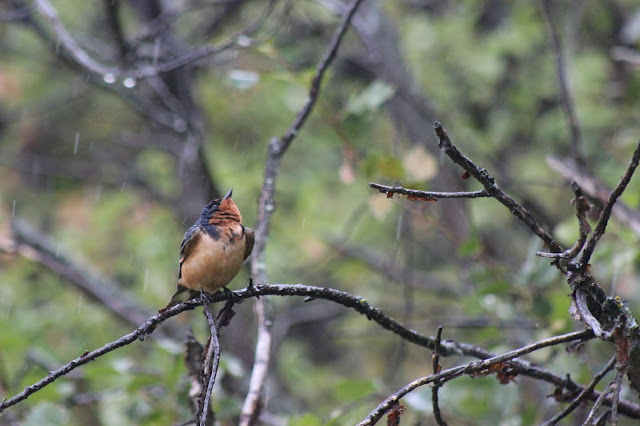 I had company while I tried to outwait the rain.  This little swallow seems to be looking skyward, saying "enough" or may it is simply enjoying it's shower.
After I left the park, I had the option to go left to return to Regina or take the road to the right to go to Moose Jaw.  I chose the latter, which was another good choice.  On my drive, I spotted a small rural church, St. Columba Anglican Church, built and consecrated in 1898.  As I drew closer I saw there was a small graveyard attached and decided both were worth a visit. 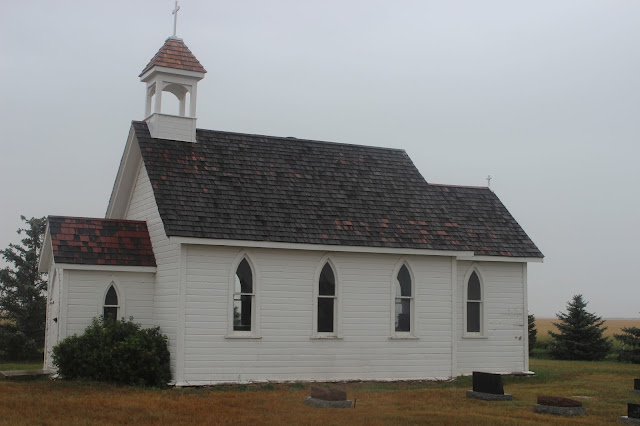 I did walk to the door of the church but did not try to open it.  I have since learned, the church is still used for the occasional wedding and baptism, but has otherwise been unused since 1959. It may very well have been open, as vandals would simply break in anyway. The church and graveyard are maintained by the direct descendants of the early congregants.
There were two markers that caught my attention.  They looked older than the others, and are those of Charles and Catherine Nicolle, the original owners the Nicolle homestead. 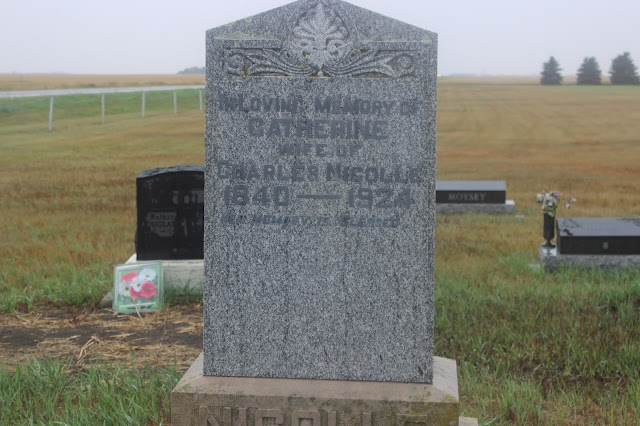 The first is the resting place of Catherine, born 1840 and died in 1924.  The information on her grave stone is still legible. 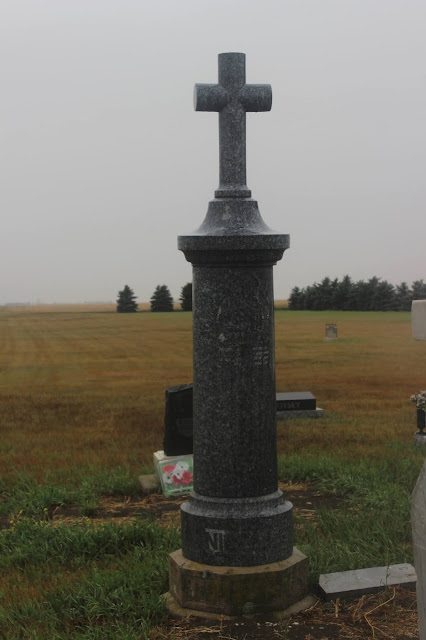 Not so, this headstone for Charles, born 1849 and died in 1918.  I was able to find more information from a photo in the Findagrave website.
I'd been fortunate in this brief stop off as the rain had lessened while I wandered about.  But shortly after I started driving the rain came down even heavier than before.  Another change in plans, as I had thought I might take a walk in the Wakamow Valley park in Moose Jaw, an urban park I visited many years ago when D was just a toddler.  That's a long time ago.  So when I reached the highway I took the exit to head for home instead of heading into the city.
It literally poured rain for the next 70 kilometers or so.  The highway is divided, thankfully, but even so the splash from other vehicles lowered the visibility at times.  I was glad to reach the city limits.  But then as I pulled onto the exit towards my house, I heard a strange noise coming from under my vehicle.  Since it didn't seem to be impacting my drive, I continued the several blocks to the house and pulled into the garage.  My son C is working from home this week, so I asked him to check for me.  It turns out that the skid plate (that covers the manual transmission) had come loose in one place and that is what I heard rattling under the car.  I've since called the garage and have an appointment to have it taken care of on Friday.
Despite the rain and the car troubles, I had a wonderful time.  The trails at Nicolle Flats are well maintained and though the signage could use some improvement, I could use a lesson in map reading too.  Had I not gotten lost/mis-directed I would have not have made it to the homestead, and had I not taken the road to the right, I wouldn't have found the church either. So things that didn't go quite as planned worked out for the best.  Besides I definitely have a reason to return to continue my walk on the trails along the marsh to find my way back to the homestead from that direction...then I'll find the path I might have taken.  I'm thinking mid-September when the leaves are starting to change!