A hodgepodge of a week

We've had several days of light rain this week, adding up to about 2 inches overall.  It's been needed and I haven't had to water my containers for several days.  It's been cool though too, with temperatures struggling to reach 20C (68F).  I was ready to see the heat break but not so thrilled with these cooler days.  I'm not nearly ready for summer to end.  Sadly, the forecast shows two nice days (Sunday and Monday) and then we're back into the cooler weather for the next ten days or so.

I did get out one day, in between rain showers to harvest a few of my veggies. It may not look like much (and it isn't) but for the few plants that I have I'm happy.  I started the tomatoes and larger green peppers from seed in late April, while the jalapeno and small red pepper plants were picked up in July when the garden centre was selling off the last of their plants.  I picked another green pepper and several more tomatoes this morning.  I'm hoping to let the rest continue to ripen on the plants but the nights have been getting cool.  5C (41F) has been the lowest thus far.

Oh well, with the cooler weather, it certainly has given me time (and perhaps a push) to get some deep cleaning done around here.  I'm almost finished the main floor but am starting to lose momentum. Hence starting this blog post on Friday rather than tackling the spare room.  I'm working on doing some decluttering at the same time and have started another box for donations and a bag for clothing.  Neither have much in them yet. 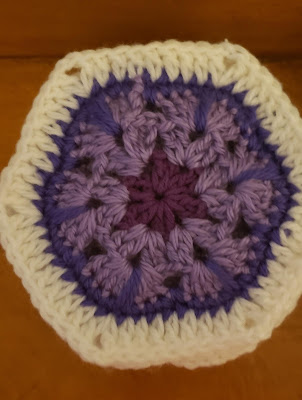 When I haven't been cleaning, I've been watching the IHHF women's hockey. Our Canadian team started out slowly but have been gelling as a team as the week has progressed. I'm disappointed that the networks are showing so little of the ParaOlympics.  There are two hours scheduled this afternoon on one of our major networks so I'll catch up on the news before the football this evening.  I've been working on a crochet project at the same time.  It's a hexagon African daisy and I'm using up a few partial balls of various colored yarn along with a huge ball of white yarn I'd picked up at Value Village. When I run out of purple, I have two balls of pink but will need a third. If that runs out before I have enough pieces, I'll use some yellow yarn for the flowers, though again, I only have two shades.  Oh darn, I will have to buy more yarn. :p

I did go shopping again this week, for groceries, cat food and litter, with stops at the local thrift and dollar stores as well.  For less than $25 at the thrift stores, this is my haul.  Three t-shirts for Eli, a blue cake pan for D, the basket to hold my pumpkins, more fabric for pumpkins or napkins, two good sized balls of cotton yarn, a crochet craft kit and a Morris Design candy jar.  The crochet craft had an original price of $25 - which I never would have paid - so I think I did well.  There is enough cotton yarn to make two more shopping bags, and I couldn't resist the candy jar.  It appears it was a promotional item as the company sells candies.  I did find a cookie jar listed at $33C, so I expect is has some value.  I've no intention of selling it, instead it will have a place in my kitchen.

I've been reorganizing a bit in my craft room, taking stock of what I have, with a plan to use as much as possible in the next few months.  I've started on a few Christmas crafts, as well as Halloween.  Here are some finishes:
The larger "Boo sign" will be hung on my front door in place of the wreath. I have a set of battery operated miniature lights that I'll add to the sign to make it more visible.
The smaller Boo sign is for my tier tray. I  want to add some fake cobwebs to the Happy Halloween frame and will display it on the china cabinet.  (Any real cobwebs have been dispensed of this week).
The last is a wooden pumpkin which I sanded, painted and covered with paper napkins.  This side I like the best because it almost looks like a face. 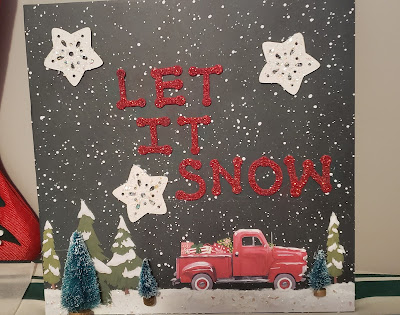 The winter/Christmas item is this board that will be leaned against the wall on top of the china cabinet.  I used a sheet of scrap book paper for the base but I wanted it to have more of a 3D effect so added the trees and stars.
In other news, D is getting Eli ready for school.  They had their last meeting with the occupational therapist on Wednesday.  K will be writing a report with several recommendations for the school and plans to visit the classroom in a month or so.  D has had a call with the principal too, to go over a few things that came up last spring.  One of them, which I just learned of, was he was called Elias at school even though D and Eli both requested he be called Eli.  The only time any of us call him Elias is when he is being naughty.  I wonder if the use of that name had some negative effect on him in the classroom.  The new preschool teacher started work this week and is planning to meet with a small groups of parents and children over the next few weeks.  Eli and two other children are the only ones returning from last year,  everyone else has moved on to kindergarten. I'm hoping they'll be able to make him a "helper" for the younger children as a way to keep him engaged.
On a pessimistic note, we're seeing an increase of Covid-19 cases here, especially among children and young adults.  The small town that D lives in had six children attending the ER just this week. (She has a friend who is a nurse). So she's quite concerned about the risk to Eli.  Most of the city school boards are mandating masks for elementary school children and recommending masks in high school.  But the smaller towns have yet to make announcements even though school starts on September 1.  D is planning to send Eli to school in a mask regardless, but knows that it will be difficult for him to wear it if others are not.
Our provincial government has basically given up.  There will be no more health orders, they're leaving it up to the personal responsibility of individuals.  I guess they're unaware of how that's gone in other jurisdictions.  Of course, they were re-elected last fall so they've got three years or so before the electorate can hold them accountable if/when things go badly.  I'm tired, so very tired, of personal freedom (a term used by our health minister) overriding the welfare of the collective.  If that's the case, let's do away with seat belts and bike helmets, bring back lawn darts, smoking in vehicles, and permit drunk driving.  On the latter aspect at least two of our current provincial politicians have some experience - one resulting in the death of a woman.
Too, we're in the midst of the federal election campaign.  The leaders are promising anything and everything to secure the votes - even when the promises appear to be contrary to the values held by the party.  To be honest, I don't think anything they are saying will swing votes.  Many people are so entrenched in partisanship that listening with an open mind is damned near impossible.  (I'll admit even though I try I get easily frustrated.) Thankfully it's a short campaign, just 36 days, with the election to be held on September 20.
On a far happier note, I'm off to visit a friend tomorrow in a nearby city.  I've been feeling a bit claustrophobic, only getting out to shop and am starting to crave contact with others that aren't family.  We're planning to visit the Farmer's market and take a walk in the park, with a stop for coffee or tea at a patio.  It's been nearly two years since I've seen C in person - it will be wonderful to see her again.
Since I've covered the week's happenings, I'll wrap this up and publish it today.  I may be back with a post on Sunday as I'm planning to take my camera with me.  I haven't been outdoors for a walk for some time, getting my steps and activity indoors instead.
Take care everyone and have a good weekend!