Back into the heat, a visit, and finishes

What a difference a few days can make! We had a few days of cooler weather, and then the heat found its way back to us.  We desperately needed the rain so even though my day trip was cut short on Tuesday, I was quite happy for the rain.  It rained again Wednesday morning too.  By Friday though, the heat was on and this weekend's forecast is for 35C (95F) on both Saturday and Sunday.  But this heat wave will be short-lived (at least that's the current forecast) and we'll have cooler weather arriving by mid-week.

A follow-up from my last post; the mechanic at my local garage determined the rattling I was hearing was from a loose bracket on the skid plate that covers the transmission and gas tank under my car.  He added a couple of screws to repair it, at least temporarily, and the cost was a mere $30.  I will need to replace the bracket at some point, but this garage doesn't carry such parts so I will likely have to take it into the dealership garage for a replacement.

D and Eli spent some time with us, arriving Thursday and heading home on Friday after a couple of doctor's appointments for the little guy.  First up was an optometrist appointment - no significant issues as yet, though Eli does have astigmatism.  Not a surprise as it is a family trait.  The next appointment was with their family doctor.  Eli has some tendencies that may be signs of autism or attention deficit disorders: tip-toe walking, occasionally flapping his hands when stressed, and covering his ears because of noise levels.  Dr. J. has made a referral for Eli to be assessed though that won't likely happen for several months. 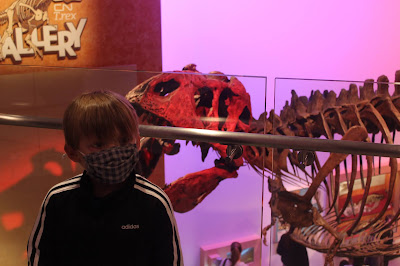 I saw evidence of this behaviour when we visited the museum on Thursday morning.  Eli was quite excited to meet Scotty, the tyrannosaurus rex whose bones were found near Eastend, Saskatchewan.  But when someone pushed the button to make the dinosaur roar, he covered his ears and wanted to get out of there as quickly as possible. We did manage to make the tour of the displays but it was a rush in an out of the museum in just a half hour.  Throughout our visit, his stress increased as he couldn't tolerate the sounds of birds and other animals in several displays and the number of other people in the space seemed to be overwhelming to him.  Once in the car, he settled down and was the loveable little boy I know so well. I think I understand why pre-K was difficult for him this past year with the chaos that occurs when a number of small people are in the same room.

An occupational therapist, K, has been visiting Eli and D on a weekly basis.  She's been working with Eli to help him transition from various tasks (desirable to less desirable) and helping D determine and set appropriate goals.  He can now put on his shoes without assistance, though they are often on the wrong foot.  (Doesn't seem to bother him in the least.)

K will work with the school too, to make Eli's time in school easier. Last year, when things got to be too much, he was sent to sit (alone) on a bench outside the classroom door.  He knew he was being punished and it certainly didn't help him integrate or learn.  This fall, we are anticipating he will have an assigned educational assistant to help direct his focus and divert his attention when needed, and K will be making recommendations for other options for dealing with his behaviour.  I'm hopeful he'll have a better experience this year too, because the teacher who basically gave up on him, has moved to another school.

I share all this because I think it that mental health disorders are often stigmatized.  Children, like Eli, are branded as difficult, bratty, and their parents lazy or unable to control their children.  In reality, these children are often undiagnosed and without supports.  And I know personally, as a parent of a child who wasn't diagnosed until she was an adult, that finding help can be frustrating.  When D was young, I visited the school psychologist on an annual basis during her elementary years, seeking assistance.  On every occasion, I was informed I wasn't consistent enough as a parent, and all of her issues would be resolved if my parenting skills were improved.  Sadly, I assumed they were right and didn't fight further for my girl. Eli is fortunate because his mother is an incredible advocate for him.

One on one you couldn't meet a sweeter child.  Eli is incredibly smart, inquisitive and loving.  D has worked with him so that he can identify his own feelings and he demonstrates empathy for the feelings of others.  When I asked him not to do something, he asked me if it would make me angry or sad if I did it.  That he understands the nuances of those feelings at the age of four amazes me.  Unfortunately, when he is in a group setting, especially one that is busy or noisy, he is easily distracted and overwhelmed, and has a difficult time regulating his behaviour.  He needs, and deserves, the assistance of all the adults in his life to help him learn coping skills.  D has ordered noise cancelling headphones for him as well as a weighted stuffed animal.  The latter is meant to help him feel calm - as though he is being hugged or held. 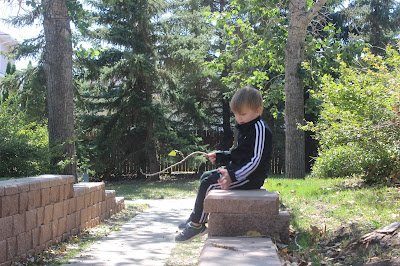 On a happier note, we visited the nearby park both days. The city put in new retaining walls last year and Eli has decided they are castles. Here he is sitting on the wall of his castle, fishing.  He found sticks for both of us so we could fish together.  Later he and his Princess mom "shot cannons" at each other across the walls.  He has such an imagination! 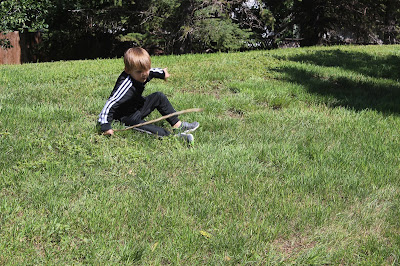 Before we leave the park, summer or winter, one of his favorite things to do is roll down the hill. With his stick of course!

Back to the regular scheduled programming - with the cooler and rainy weather early in the week, I spent some time playing in my craft room.  And I finally finished Eli's sweater.  I know I made it a bit large, but we couldn't convince him to try it on for G'ma so I'm not certain just how big it truly is.  He wasn't particularly excited about it.

I won't call it my best work, because I made the mistake of gluing the first tier of green felt down before ensuring where the other pieces would end up...so the tree is off balance, and a little too low on the stocking.  I'm thinking I may add a few small snowflakes at the top above the star.  On the reverse is my very rustic rendition of Santa's face....no photo, I'll let you use your own imagination.

This little cart was a purchase from the dollar store.  I stained it, added some floral foam, a bit of moss, several small pumpkins and a few floral stems.  Everything can be removed and I can switch it out for the seasons. I'm already envisioning a pile of small wrapped presents and ribbons for Christmas.

The last finish are these painted pumpkins (not the orange one).  The dollar store sells foam pumpkins.  I simply painted them with white chalk paint, dipped the stems in brown paint, used gold paint for the stripes, added a few leaves and popped the stem back in.

I've been eyeing up the sheer volume of yarn in my stash.  It's time to start working my way through some of it.  I've started knitting a new market bag with some cotton yarn.  But that's just the first of many projects - I just have to decide what's next. There are several small bits of yarn for making scarves again this year, and I also have a couple of small wreath forms to make up.  The list never truly ends!

Sigh, just like housework.  Time for me to close off this post and get some vacuuming done.  In the 90 minutes or so I took to write this post, the temperature went from 15C (59F) to 31C (88F), so I won't be spending much time outdoors.  Good thing there are two footballs games being broadcast this evening. I'll plant my butt on the couch and knit.  Go Riders!