Okay, who moved the hands of the clock forward?  I've no idea how it can possibly be the weekend already.  Darned if I know where the time went either.  My son had the week off, with Monday being the stat holiday.  Since he likes to sleep in, and I'm a doting mother (or I just spoil him), my mornings were generally quiet.  I puttered around the house, caught up on paperwork, played on the computer, crocheted or read.

My pain in the back has eased considerably, to the point where I only feel it when I sneeze (OMG does that hurt), or if I twist to pick something up.  I've been doing my walking in the house, but decided one day this week to venture out on the walking paths for a change.  There are photos as proof. 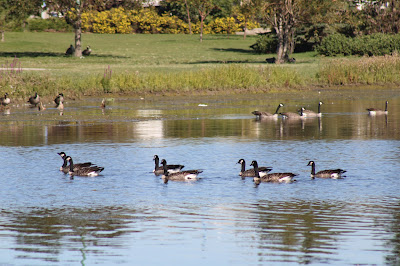 I did make it over to the creek and the pond. I have no photos from the creek, as there really wasn't a lot of activity there.  Just a couple of ducks.  Over at the pond, there were lots of geese and a few ducks remaining. 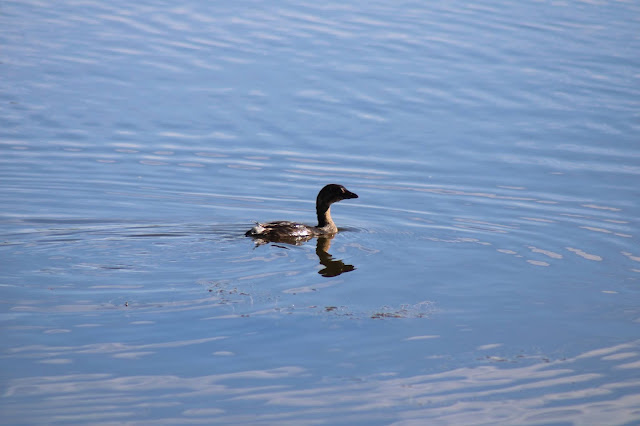 This was the only cormorant I saw, an immature bird from the size of it.  My goodness it is fast as it dives under the water and swims quite a distance before re-emerging. 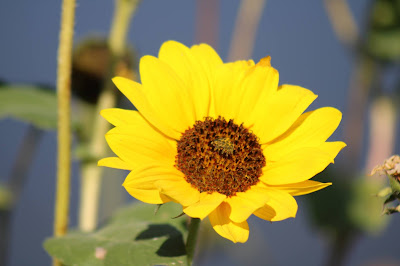 The wildflowers are still blooming near the water.  I love these sunny yellow flowers, their pretty faces always bring a smile to mine.  The fireweed is also pretty. 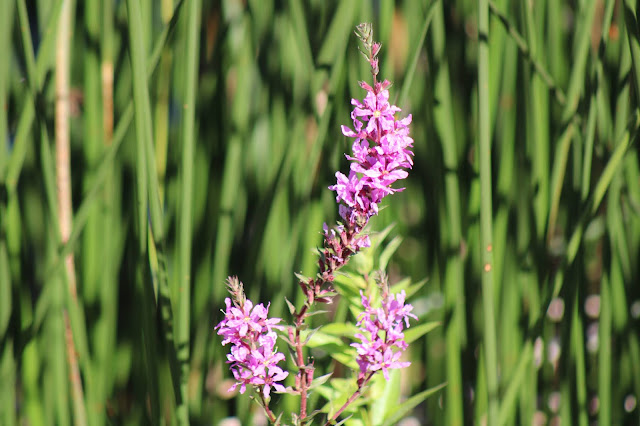 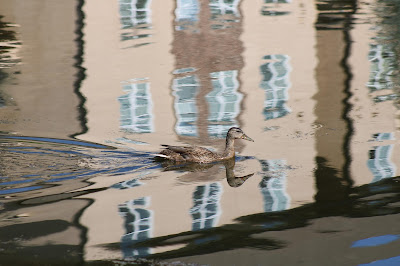 The buildings mirrored in the water make an interesting backdrop for the duck.  It almost blends right in.

Sadly, I spotted a dead duck in the water. The fact it was there didn't seem to bother the other ducks as they continued to feed around it. 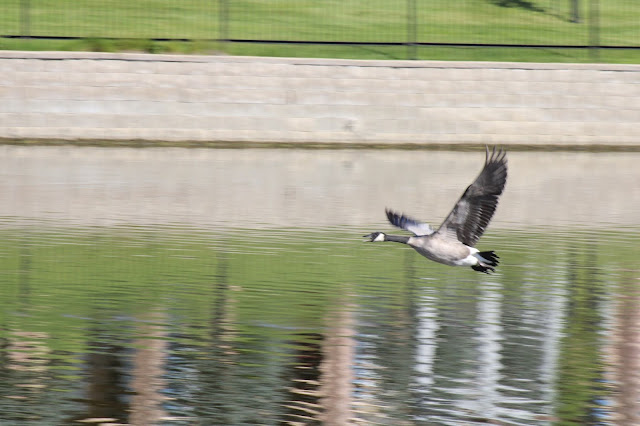 I'm always trying to capture the ducks or geese in flight, and I think is probably one of the best shots I've gotten.  It's calling out to other geese as it takes off from the water. 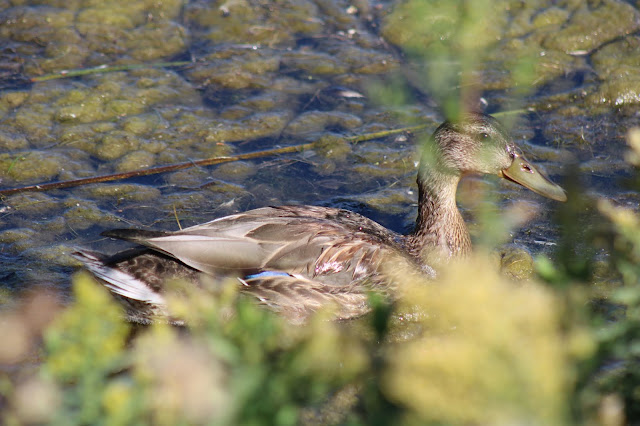 The pond water is getting so dirty and full of scum.  But the markings on this duck are so pretty.  It sat so still while I took it's photo - almost as if it was posing for me.

This week's grocery run was short and sweet, just one store, as my list was short.  I did get chicken breast for $3.99 a pound at the Co-op, though was limited to one value package at that price.  On Friday, I made a quick run to the thrift stores - found another bag of cotton yarn for $3.99 (because one can never have enough yarn) and couple of t-shirts for a total of $5.98.  I badly stained a t-shirt a week or so ago, and could not get the stains out so it went into a rag bag.

While I was out running around on Friday, I had a call from my back yard neighbour.  His Dad has spotted wasps going in and out of a hole in my shed.  Both of their children (5 and 2) had been stung as well.  I tried various stores with no luck finding any spray, so I gave a local pest extermination company a call.  They sold me some powder to use in the hole and I made a trap with cat food and juice.  By early Friday evening I had more than two dozen wasps in the trap. Just after dark, I went out and squeezed a load of powder into the hole they were coming in and out of.  I've checked twice this morning, and there is no activity.  I don't know if that means they've died off or moved, or because it is cool this morning, they aren't mobile just yet.  I'll keep an eye out throughout the day but hopefully the problem has been dealt with.

It's a busy sports day here today.  Yesterday, I was able to watch three curling matches on You-tube, and there are three more on tap today, along with three football games!  You'll find me planted on my couch, with my crocheting in hand.  The vacuuming can wait until tomorrow. :)

Posted by Maebeme at 09:45
Email ThisBlogThis!Share to TwitterShare to FacebookShare to Pinterest
Labels: aches and pains, time flies, walk, wasps