A day to remember

Yesterday was a wonderful day, and I'm tired. We boarded the bus shortly before 9 a.m. and arrived back in the city shortly after 8:30 p.m.  I live close by and was home and in my pj's in short order.  Throughout the day I got in close to 12K in steps and with a little exploring in the first two communities I was able to get in 37 minutes of activity too.

The first community we visited was Montmartre, Saskatchewan. 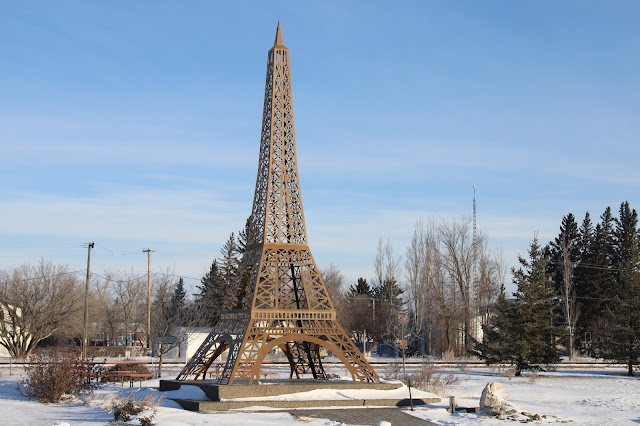 The small community was settled by wealthy French immigrants in the 1890's and named after the district they once called home.  The replica was completed in 2009 and Montmartre has branded itself "Paris of the Prairies".

We had about 3 1/2 hours to visit here with shopping at a local Pharmasave (a drugstore with a twist), a local jewelry maker, a ladies clothing boutique, and the library where several vendors displayed their homemade wares.  Before hitting the stores I headed over to the Eiffel tower to take a few photos.

This particular Pharmasave had mystery boxes for children, men and women.  I purchased of the children's boxes, one for Eli and one that I will donate to a Santa's anonymous (though I realized I'll have to unwrap it).  I found a few small items to add to the gifts for various family members.  At the library I bought some homemade Christmas soap, and at the used book sale I picked up three new-to-me books to add to the reading pile.  Definitely a bargain.

From there I headed over to the boutique but it was packed full of ladies and, to be honest, the clothing wasn't as casual as I would normally wear, and the prices were higher than I would normally spend. So after a quick look around I headed back downtown.

I was among the first group scheduled to have lunch at Sister's Bistro, so I stopped there to have a cup of tea and wait for the others.  I was joined by another lady and then two others from her group.  Our lunch included French onion soup and Salad Nicoise.  The lunch was included in the cost of the event and I can say that it was very tasty. 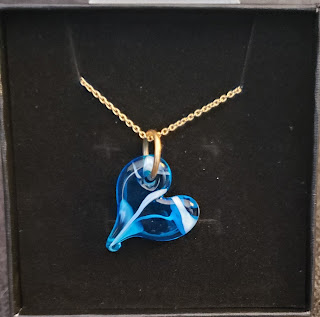 Initially I hadn't planned to top at the jewelry store but the second group to eat lunch included the bus driver, I decided to stop in.  I was glad I did.  This will be a gift from Eli to his mom.  The colors of the heart are some of her favorites and that little boy loves his mom to bits.

Since there was still a good half hour or so until the bus was scheduled to leave, I went for a walk about. I didn't find anything else particularly interesting but the fresh air was good for me.  Soon enough, we were boarded and on our way to the second community of Kipling.

The town is known for the largest red paper clip in the world (according to Guinness). I won't enumerate the story of how the red paper clip came to be as you can read it here if you are interested. 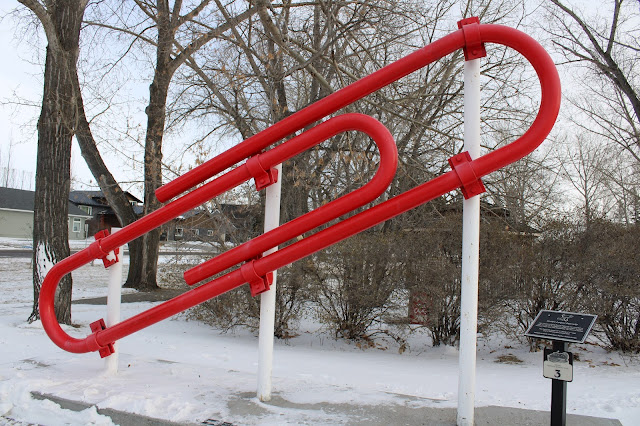 Again, I let the others make their way to the stores while I did a bit of exploring.  My first stop was a former thrift store that now sells both new and used clothing.  I found a lovely pullover sweater for a whopping $5.  I wandered a bit further, and spotted their Pharmasave - it didn't match up to the one in Kipling.  It was time for dessert at the Paper Clip Cottage - a lovely piece of carrot cake.  Yummy!  I ought to have considered purchasing a couple of their meat pies but decided against it...next visit.

There were two other businesses on the list, an antique store, and the local liquor store.  I didn't visit either as I was already to feel shopped out.  Instead I headed to the bus and visited with a group of ladies who were feeling as I was.

Back on the road we headed for Grenfell.  I wasn't to find anything of note to photograph there so went along with the rest to shop.  My favorite spot was an import store that brings in goods from Indonesia.  Oh my, were there some lovely items there, including furniture, hand blown glass, fabrics, soaps, and other goods.  I spoiled myself and purchased this bag.

It will come in handy to carry my knitting or crochet projects when I visit D and Eli, and to knitting group when that starts up again. I love the colors in the bag, and another one of the ladies saw me with it and purchased one for herself.

The last store I visited was a small town department store, mostly clothing but a little of everything else too.  There were Christmas candies, cocoa, and nuts, kitchen ware, toys, and even an aisle of craft items.  Guess which one I gravitated to?  :) I walked out with a couple of items to add to the craft room.

My feet were telling it was time to get off them, so I boarded the bus and waited for the rest.  There were a few stragglers and the tour operator (Cheryl) had to chase them down. I guess they weren't ready to be done shopping quite yet. From there we headed to Indian Head to the Wooden Nickel for a roast beef buffet.

They had a room set aside for the entire group, and it didn't take long for everyone to be seated.  Despite our lunch and dessert earlier, I think we were all hungry.  I sat with another group for dinner and had a wonderful visit.  It wasn't long before we'd discovered connections and people we knew in common.  The food was fantastic and I learned they have a similar buffet at least once a week. The community is about 45-60 minutes from Regina but might well be worth the trip for a really good meal.

It was dark as we returned to the city, and the bus was quieter than it had been earlier in the day.  I'm pretty sure everyone was feeling tired and satisfied from the day and from the meal. Back at the drop-off, the bags of shopping that were stored in clear plastic bags and tagged with our names were unloaded.  I found mine fairly quickly, was in the car, and headed home in just a few minutes.

When I realized that this was more of a shopping trip, I wondered whether I should attend.  But I'm glad I did - my Christmas shopping is definitely complete now and I enjoyed getting away for a day.  I was chatting with Cheryl at one stop and we were discussing a trip they normally would make each year to the Cypress Hills, just inside the Saskatchewan border near Alberta. It's a very scenic area and I'm hopeful I'll be able to join in a trip next year.

It truly was a wonderful day.  I learned some history about the small towns we visited, I met some very nice women, ate some great food, and stayed within the budget I set for myself.