Life's up and downs

I've been reading posts this week of snow in other areas - it's too soon! While we had a few flakes in the air early Monday morning, we have thus far avoided seeing the white stuff stick to the ground. It has been cool though, especially in the morning so I've been continuing to walk inside the house after I run out to feed the birds.

In preparation for the winter weather, I headed to the local tire shop on Tuesday to have my tires changed over.  I had an appointment for 9 a.m.  I was told the work would take about an hour so I elected to stay at the store. I'd brought my knitting and a book just in case.  Unfortunately it ended up taking longer than anticipated.  First, they didn't get the car into the bay for nearly 30 minutes and then I was told that my tires needed replacing.  I don't have the tires on rims, so they have to be stretched to change over each season.  There were pieces of rubber cracking and flaking, so I agreed it was time. I've gone with an all-season tire that I won't/shouldn't need to change again.  Since I've retired, I don't drive as much and the car is 15 years old, so I anticipate this will be the last set of tires I buy. 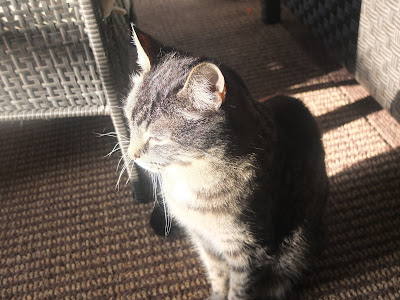 Wednesday and Thursday were particularly hard days.  Our eldest cat, Sasha has been showing sign of decline over the past few weeks.  My son and I talked on Wednesday evening, as Sasha was not eating his regular soft food, and would only eat two small treats. Sasha has always been his cat - actually we used to say that C was Sasha's boy. Together, we made the hard decision to let him go, and I made an appointment at the vet's office on Thursday morning.  I was grateful to be able to hold Sasha in my arms for the procedure and he passed peacefully.  This photo was taken in 2011, when Sasha was just eleven years old. He loved the sun room and this shot, while over-exposed is so Sasha, enjoying the sun. It is how I will choose to remember him, healthy and happy. 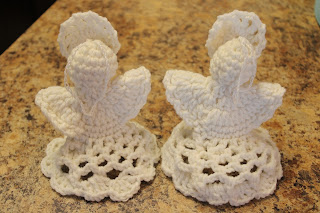 Friday wasn't much easier, my tears were never far away, so I kept myself busy as much as I could.  I ran out in the morning to run an errand for D, and mailed off a parcel to her.  Included were the little angels I made up for Eli's pre-K teacher and teacher's assistant.  I missed a row in the smaller one, but left it be as I don't think anyone but someone who crochets would notice.  The original pattern didn't have halos but I found another patter and added them. 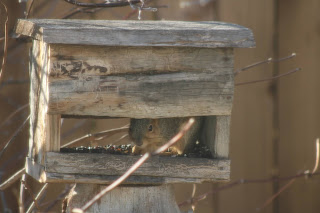 I also stopped and picked up more bird seed.  We've had decent weather this week, but the forecast for the next two weeks are more seasonal with possible snow in the mix by mid-month.
The curling is back on television, has been since Thursday so I've spent more time knitting and crocheting.  The latest scarf is about 2/3 complete and I started a small project making coasters to use up some more scrap yarn.
This morning, I'm catching up on television programs I've PVR'ed over the past few weeks.  Apparently it's been awhile as the show I'm watching now has four episodes I haven't seen.  It seems I've been watching a lot of curling.  There are three draws today starting at noon, so my day is mapped out.  Housework can wait!
To end this post, I'll leave you with a photo of my cat Saku.  Having him here is helping me deal with the loss of Sasha, especially when he is being a goof.  I can always count on him to add a little levity to my day.