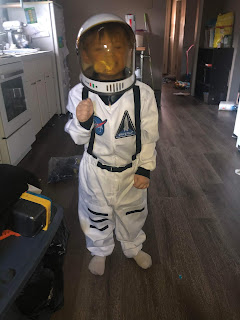 First up, Eli tested negative for Covid. Thank goodness!  D sent me this photo the morning of his pre-K Halloween party.  He's pretty proud of his astronaut costumer.  It's large on him, so will fit easily over his coat on Sunday. It will only be just above freezing as a high that day.

And in response to comments from last week's post, I really don't mind if the squirrel eats some of the bird seed.  They are little piggies though so I keep an eye out when I see one at the feeder and will chase it away after a few minutes.  Gotta leave something for the birds.  The bird feeder I own is one my brother made and installed for me.  It will stay here, when and if I move, because it is attached to the stump of a dead spruce tree. Maybe then I'd get a squirrel proof feeder.

I was so proud of myself when I bought groceries last week because the cost was so much lower than a usual week's worth.  Well, I soon figured out it was because I didn't look to see what would be running out soon and only bought to replace items I'd run out of to that point.  As a result I was back at the grocery store on Monday to get some additional items.  Not many, and mostly staple items, but still I have to wonder at my foolishness. I should have enough to last us until next week.  Meal planning for Monday and Tuesday was especially easy.  My son's birthday was the 25th, and we ordered in pizza.  I'd picked up a bag of cut romaine so there was Caesar salad as a side.  Safeway had no ground beef - there was a sign indicating they had been shorted on their order, so I stopped at the Co-op.  That's the first I've seen for meat.

On Tuesday, I needed to run out to do an errand for D.  That morning I'd received an e-mail from the Costco West blog and saw that toilet paper and Reebok running shoes were on sale.  After the errand, I headed to the store to grab those items.  I'm pretty certain I have enough toilet paper now to outfit us for at least 3 months or more.

The shoes were on sale for $29.99, and while they're probably not the best quality, they're definitely comfortable!  I wore them around the house for an hour or so and I couldn't believe how cushioned they were.  (Perhaps that says something about the current state of my old pair?) I'm not sure why they have pink on the soles and I suspect that color won't last but they're cute.

It's been hard to get my housework done this week - the curling started up again on Tuesday, and of course, so did the World Series.  With 3 draws of curling a day, I have been getting lots of knitting and crocheting done.  The scarf I showed you last week is nearly complete. I was so disappointed with the second ball of yarn.  It wasn't knitting up as nicely as the first, so I ripped it back and put the first half on a separate needle.  Then I tried to locate a section of the yarn where the colors were similar to where the first ball had started, it wasn't quite the same but was okay, until I ended up with a couple of knots in the yarn.  These happen when the manufacturer has breaks in the yarn and ties on another thread.  There is about a six inch piece where the pattern is markedly different, and then it changed again and knit up similarly to the first.  I have to sew the two pieces together so will keep it for myself.

I've finished another scarf, crocheted, and have a knitted one about half complete. With all the sports to watch this weekend I'm almost certain I'll finish it by Sunday.  Next on the agenda are a pair of crocheted angels.  D was looking for Christmas gifts for Eli's teacher and E.A. and I offered to make up the angels.

We had a lovely warm day on Friday, but today we're back into the cooler weather.  I went out and hung up the tape to (hopefully) keep the kids from running across the patio from the neighbour's house.  I'm not worried about the patio, but the step up from the patio to the sidewalk.  I have visions of some child tripping and falling with angry parents yelling at me.  It's hard to know how many children we'll have at the door.  I bought enough goodies for 50 kids, so if they don't show I guess C and I will be snacking on Halloween candy for a couple of weeks.

Okay, this post is boring me so I'm sure it's of little interest to anyone else. Time to get a few chores done before the curling starts in an hour.  Take care everyone and have a good week.