A week that was and a Thanksgiving visit

Who knows what happened the first few days of the now past week?  I can't recall and I don't have anything much written down on my calendar beyond cleaning cat litter and a few chores.  I note I did get out to Costco on Tuesday - there were a few items on sale that I wanted.  I follow a blog that posts photos and pricing of sale items (or other items that catch the writer's fancy).  One of the items I wanted was a CO detector for the basement.  It's a plug-in version with a lithium battery back-up.  I did the test and it is loud!  I hope I never hear it in real-life.

I also picked up a couple of gifts for my son and daughter for Christmas.  I'm very close to finishing my shopping.  I know it's early but with concerns about the supply chain I'm happy to get it over and done with.  My favorite Pinty's buffalo chicken "flings" (basically a chicken nugget) were also on sale. The regular price has gone up by a dollar, so the sale price isn't as good as it once was but for now I'll buy them every so often.

Wednesday was an absolutely beautiful day weather wise.  I spent some time outdoors, cleaning up the front containers as the plants were looking pretty straggly.  A neighbour stopped as I was working and we chatted for a bit.  They had planted some lilies this summer in containers and were hoping they'd make it over the winter.  I suspect they won't and mentioned they might want to put them in the ground...he thought the dirt in the containers was the ground.  They are new to gardening so just a rookie mistake.  I pulled my geraniums and a piece of ivy from each container.  The ivies are potted up and sitting in my kitchen window, while the geraniums are drying out in the garage.  I'll put them in a bag and store them in the garage (it doesn't ever freeze since it is well insulated) and hopefully I'll be able to use them again next year.

Thursday was grocery day.  Nothing exciting to report there.  Prices just keep increasing but I really didn't need much and bought some sale items to put into the pantry.  Friday the curling started so I was lazy and spent the day watching several games and knitting.  I've finished four scarves and over the weekend used some of the remaining yarn to make up two headbands. 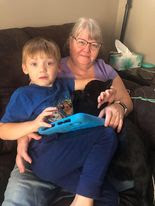 On Saturday I drove out to D's for an overnight visit.  She made a lovely meal that evening of ham, roasted veg and homemade buns.  I got to see the finished bathroom - it is lovely! and spend time with my favorite guy.  Stanley (the black cat on my lap had come to cuddle, so Eli piled on too.)

While I was there I cleared out D's flowers from the containers, while she scrubbed the downstairs bathroom and Eli ran around the yard.  She was taking care of a friend's dog while they were away from the weekend, so Eli and I hung out when she went over to their house.  She took advantage of the opportunity to run to the store without her little helper while she was out. Before I left on Sunday, Eli and I spent some time outdoors.  It was cool in the early morning but warmed up nicely.  He is getting so tall!

I left about 3 p.m. and was home by 4:30, just in time to feed the cats. :)  C went out for dinner with friends so I had the house to myself for a bit.  I had one curling match up on You-tube on my smart television, while the other match was playing on FB.  Both of the teams I was pulling for won, and are into the playoffs.  Today is playoff day with three draws.  I've currently got the same setup as last night, but one of my teams is not shooting well today.

Our weather has cooled off significantly, with frost forecast for tonight.  Between draws I've got to get out and clean out some containers.  But first, I have to head to the local Walmart to see if they have a charging cable for my Samsung phone.  I forgot mine at D's and she won't be able to mail it until tomorrow morning - the earliest I'll have it with our mail delivery is Wednesday afternoon.  For now, the phone is shut off and if I can't find a charging cable it will stay that way except if I need to use it briefly.