Getting things done and minor annoyances

As I was starting to write this post, thinking back over the week, I felt as if I'd lost a day.  Of course I didn't and looking at the notes on the calendar it was clear I hadn't.  After a bit of thinking (I'm a little slow on the uptake), I realized I was forgetting that my son had Monday off work - it was his regular, every two weeks, earned day off.  It threw me off kilter, though I do try to keep track of his EDO's because I've been known to wake him up some mornings (including on a weekend morning) when he doesn't have to work. Oops. He's generally not very happy with me on those occasions.

It's been a regular week with housework, shopping, crafting and lots of sports.  I have yet to decide who I am cheering for in baseball but have decided I can't cheer for Atlanta. In light of the discoveries of unmarked graves at the residential schools here in Canada (and I suspect they exist in the USA as well), I can't tolerate the sound of the chant of the fans in the stands.  Call it political correctness if you like, but it seems so disrespectful to me, not only to the First Nations people but even to the settlers of the country who died at the hands of someone wielding a tomahawk.  If the LA Dodgers don't win this series, I'll have to cheer for the next team to face the Braves.

The curling in Penticton, B.C. ended Sunday with a really great match-up.  I didn't care who won as both teams were playing well and either team would deserve the win.  An unfortunate miss in second to last end was the difference in the game.  This week's event is a Grand Slam - a world curling tour event. The top 16 men's and women's teams in the world are invited so this is truly the elite of curling.  Sadly, the broadcaster didn't air the earlier games in the week - it started on Tuesday but the games available on television started on Thursday.  And just to annoy me even further, the evening games weren't available either unless I purchased a special streaming service. At $14.99 a month, to be able to watch one or two curling matches is far too pricey in my mind. (They must have heard me complaining because Friday night's game was offered for free.)

I'm glad I got my yardwork done last weekend.  All of the containers, ornamental pieces, tools, and hoses are tucked away for the winter. There is one exception, I left the pansies out on the front step.  They've looked a little sad early in the morning but so far are hanging in there.

The chairs are stacked up on the deck, and the tables folded up and put away in the shed.  Everything looks so barren. It's gotten very cold for this time of year too.  Wednesday morning it was -7C (19F)!  It doesn't look like we'll have seasonal temperatures until sometime next week and the long range certainly doesn't look great.  I suspect the little trick and treaters on Halloween will require costumes to be worn over winter parkas.  Not unusual for this part of the world. 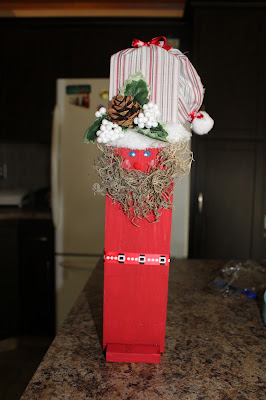 This week I spent some time playing in my craft room.  One finish to show you is the rustic Santa.  I'd found a couple of boards in the garage that would appear to have been scraps from the replacement of the counter tops and sinks in the bathrooms. The ends of the board are rounded off so I added a couple of large blocks so it would stand on its own.

Some paint, a piece of scrap fabric, a bit of ribbon, a couple of pom-poms, some Spanish moss for a beard, and the floral pick was all that was needed.  Since all of the materials were in my stash it was a pretty inexpensive project.  I'd guess overall I probably spent less than $4 for the materials that went into it. 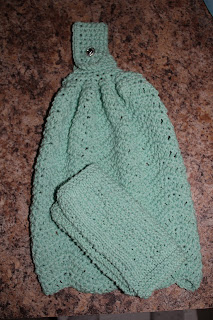 I've also completed two sets of dishcloths and a kitchen towel.  This set is for my daughter.  The dishcloths are a knitted seed stitch, while the towel is crocheted in a chevron pattern.  These are small projects and work up quickly.  I made the second set as a gift for my sister-in-law, though to be honest my brother does the dishes most often so I should just give them to him. :)  They're both getting books for Christmas, so perhaps I'll just package everything together. 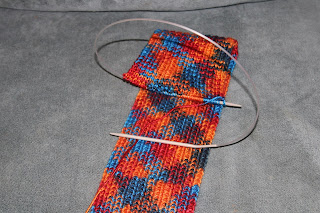 Another scarf is now on the knitting needles - and I like it so much I may end up keeping it for myself.  It's a variegated yarn and I love the pattern it is making as it knits up.  And one scarf won't matter, as I was sorting through yarn in my craft room and came across a bag of scraps from last years efforts - I won't be running out of yarn for scarves for quite awhile yet.  As long as I can match up the yarn weights I can make striped or block scarves out of the smaller balls.

D called on Friday evening; Eli has been identified as a close contact of another child who recently tested positive for Covid.  She had obtained rapid tests from the school before this, and will need to test him on Sunday as he must have a negative test before he can return to school.  While it is a concern, their contact was on the playground at school at recess so neither of us are too worried.  Fingers crossed, he hasn't been infected.

I'm settling in for a sports weekend - the first curling matches are nearing a conclusion.  There's been some highlights and definitely some nerves out there based on the misses.  These are the men's quarterfinals - four teams will be out of the tournament if they lose.  The women's quarterfinals are scheduled for this afternoon, and the semifinals tonight.  In addition, there are three football games, and our Riders play in the last game of the night.  They haven't been playing well, late in the season, so my hopes are not high.  Add in a baseball game, and my remote control may overheat today!

I'll leave you with this photo. 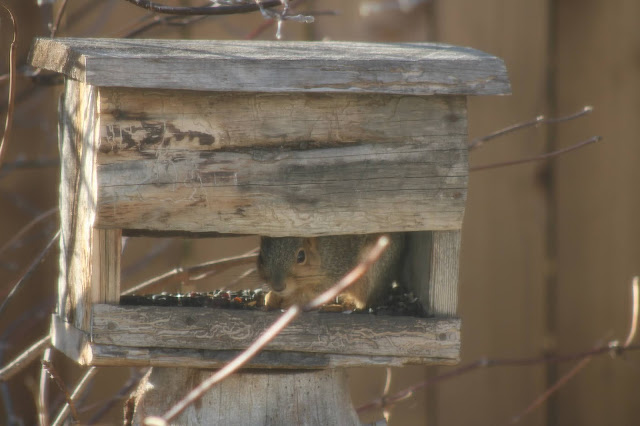 I started feeding the birds this week, since we've had frost for several days in a row.  This morning when I went out to feed them, I discovered the squirrels (most likely) had chewed the handle off the lid of the container. They didn't get into the container though.  Later I looked out the window to see this cheeky little squirrel in the feeder.  It didn't even leave when I opened the window to take it's photo.  After a few minutes I went outside and chased it away.  I don't mind if it eats some of the food, but the birds need it too.

Take care everyone, and stay well.