Before I forget, Kathy asked last week how I was planning to overwinter the geraniums.  This is the first time I've attempted it, so am relying on information I found in a FB gardening group.  When I lifted the plants I removed most of the soil, and laid them out in the garage to dry.  After a couple of days (or in my case a week because I forgot), I've removed the dead foliage and placed them in a plastic bags.  They need to be stored in a cool, dry place, and for me that's my garage.  I'll have to let you know how it all works out in 7 months or so. :)

This week flew by in a flash!  Of course, I posted on Monday so the week was shorter than normal, but even so, it seemed it was nearly the weekend again before I turned around.

The curling kept me busy on Sunday, and started up again on Thursday. I suspect this will continue at least until the end of November when the Olympic curling trials take place.  I've also been watching the major league baseball playoffs - I got hooked at the end of the season when the Toronto Blue Jays made a bit of a run though they came up short, and have been watching the games since.  It amazes me how one game a team will be able to get hits and runs, seemingly at will, and the next game be unable to score. I guess the pitching has a lot to do with it.  Add in Canadian football and I've been in sports heaven this week.  Hockey also started up on Wednesday but other than a few minutes of a couple of games I haven't watched a lot.

I haven't always been a baseball fan.  When I was at school as a youngster, when teams were picked for a game, my team always sent me to the outfield....way, way, way outfield. In fact, there was more than once that the teacher sent someone out to find me after recess.  I'd get fascinated by an ant hill or wander over into the bush next to the ball diamonds, or simply sit and day dream.  However, a few years ago, while on a cruise, I met a couple from New Jersey.  Their names escape me now - I remember he sold ice cream and she was a huge baseball fan.  She and their son had visited numerous stadiums across the United States.  The world series was on that week and she and I would make our way to the lounge where the games were being shown from the satellite.  I don't recall who won the series but I got a new appreciation for the game.

I did get most of the housework caught up this week, much of it on Tuesday morning before the baseball started.  I had to run out too, to pick up a doctor's note for my daughter, so made a couple of extra stops at the dollar store, Value Village, and Walmart.  Nothing exciting at the dollar store, and though it was senior's day I found one item at VV.  It is a small lantern meant to hold a small candle.  I've already started re-doing it - it was metal with glass panels - the metal has been painted white and I intend to fill it with some Christmas decor and a set of battery operated lights.

My daughter had asked if I would get pillows for her for Christmas, but "could she get them before Christmas, please?".  I found Serta pillows on sale at Walmart so we all got new pillows.  I also picked up a new laundry basket as my old one had fallen apart.  I loaded them all into the back seat of the car, and it was full.  If I'd had an accident on the way home, I would be well cushioned. :)

On the project side, I'm getting lots done while I'm watching the various sporting events.  I had done dishes a number of times at D's last weekend and the dishcloth she was using was falling apart.  I pulled out my cotton yarn and knit up three dishcloths for her.  Since I had it out, I found a pattern for a crocheted kitchen hand towel and started that as well.  I also did some puttering in my craft room and have a couple of other things on the go. 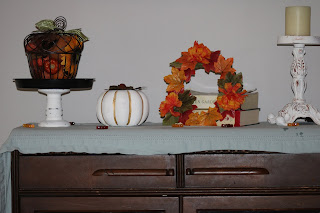 I did switch out the display on the top of my china cabinet.  Most of the items are ones I made or revamped. This is the initial display - I'd meant to make a sign using thankful or grateful but never got around to doing so, thus it's pretty barren.  The next photo is my display for Halloween. I'm sure my son thinks I'm nuts, but I'm having fun with it. I sent a photo to D and Eli said it was spooky. 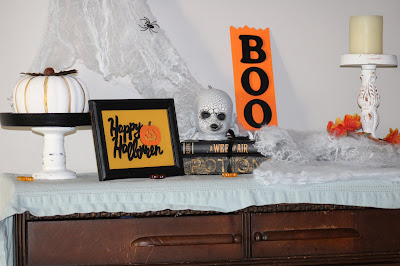 Thursday morning started out cold and wet.  It was below zero when I woke up, and it never made it to more than 3C (37F) that afternoon.  There was even a skiff of snow on the top of the garbage and recycling bins when I went to move the garbage bin to the street for pick-up.  I'm so not ready for this type of weather, but thankfully we've got better weather for the near future.  The containers of flowers are still out!

I did have to run out as I had a flu shot booked for that morning.  I got the shot at the Safeway pharmacy so did a some grocery shopping before I left the store.  I may or may not have left before the 15-20 minutes I was supposed to stay was up.  In fact, I think I arrived home about 20 minutes after the shot.  I've yet to have any kind of reaction to the flu shots.  This year is no different.  My arm was a wee bit sore on Friday morning, but I did some arm circles and the pain dissipated quickly.

This morning was cold too, -2C (28F), but is expected to warm up to 16 (61F) this afternoon.  There are four curling games and two football games being streamed or televised, and sometime between or before all that I've got to get outside to start pulling the plants from the containers.  Sunday is supposed to be quite warm too, so I'll finish then.

Oh, the other momentous occasion this week was finally getting on of the fence gates repaired.  I've been sending e-mails to the company for four weeks about problems with the gate.  The post attached to the house was loose and the locking mechanism wasn't working properly.  The owner kept promising to send someone out and then either forgot or got too busy (whatever!), and finally I'd had enough.  I informed him, if someone wasn't there within the week I would be hiring someone else to make the repairs and sending him the invoice.  It still took an extra day (the worker had a funeral to attend - maybe?) but he did show up this week and the necessary repairs made.  I don't expect they'll ever ask me for a reference.

You may note that the layout of the blog is slightly different.  I messed up when I went to change the photo, (I need to remember to scroll down!), and ended up deleting the header gadget.  So then, I had to change the theme in order to get one back.  When the photo I originally posted was too large I clicked the button to shrink it and I ended with what's there now.  I give up...blogger is certainly not an intuitive application and the help section is pretty much a mire of closed questions.  I couldn't even figure out how to submit a question of my own.

Enough of my ramblings, time to make another cup of tea and settle in with my crocheting to watch the first curling game of the day.  Take care everyone, stay well and have a good week.