I've recently put together a time-line of one of my great-grandfather's lives.  We've run into a bit of dead end with his father Hugh (my great-great grandfather), who emigrated from Scotland.  We do know he changed his name from Stuart to Stewart when he came to Canada. He arrived in Canada sometime prior to 1855, when he married Catherine Milligan in Huron County, Ontario.

A cousin, who has been attempting to trace the history of the elder Hugh has been able to locate the land description of the property where Hugh and Catherine settled and raised their children.  My great-grandpa was also Hugh Stewart, the fifth child of Hugh and Catherine.  He was born in 1865 - I suspect at home as the information lists only Huron.  He was the only son that survived into adulthood.  His brother Charles, likely a twin of his sister Mary, died before he was year old. His older brother John passed away at the age of 23.  This information was located from the grave markers in the Brussels cemetery.

GG Hugh married at the age of 24 to Elizabeth Delgatty on March 20, 1889 in the township of Grey, Ontario.  The couple lived with his parents; his father passed away in 1893, just months before the birth of their first child. Census data indicates GG Hugh continued farming and I suspect he would have taken over the land from his father, as the only surviving son.  One of his sister's (Mary) had married while the second (Jean) continued to live with the family.

His mother passed away in 1912, and by 1916 Hugh and Elizabeth and five of their children were living at Bratt's Lake, Saskatchewan.  The oldest daughters were married and also living in Saskatchewan. I can assume they originally moved with the family and then met and married their husbands.

Their oldest son (also Hugh) was enlisted in the Northwest Royal Canadian Mounted Police, and I'm not sure where he was stationed.  I wasn't able to confirm, but suspect that GG Hugh's sister Jean, had stayed behind in Ontario, with members of their sister Mary's family.  Mary passed away in 1914, and Jean's death certificate from 1936 was signed by one of Mary's sons.

From that same census data, I know that Hugh's occupation was listed as a grain buyer. Historical land information searches would suggest he never homesteaded any land here in the province.  In 1916 he would have been in his early 50's so one would think he might have.  It would be interesting to know why the land in Ontario was disposed of and why he chose not to set up a farm in Saskatchewan.

The census data for 1921 doesn't appear to be complete and I've lost track of Hugh and Elizabeth for now.  In fact, I was only to find census data for his oldest daughter Mary and her family who were living in Weyburn, Saskatchewan at the time. 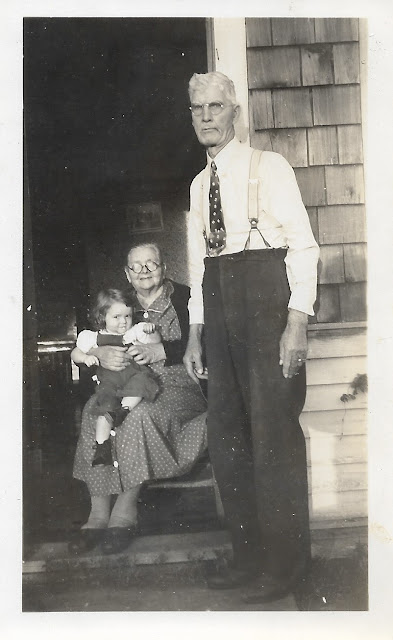 This is the only photo I have of Hugh and Elizabeth.  The cousin I mentioned before was able to tell me the photo was taken in Kindersley, Saskatchewan around 1939.  Pictured too, is another cousin, Gayleen sitting on the lap of Elizabeth. (Note: these cousins would be first cousins of my mother).

I think I may have found Gayleen, she'd be in her early 80's now and have sent messages to her and another possible family member in the hopes that they might be able to provide some additional information to fill in the gaps.

At some point, I do know that Elizabeth came to live with my grandparents.  She'd had several strokes and was bedridden.  Elizabeth passed away in 1944 and is buried in Nipawin, Saskatchewan.  Hugh is also buried there; he passed in 1949.  My mother would have been a teenager when her grandmother passed away, and in her early 20's when her grandfather passed away.  Many years later, after our grandmother (Nan) passed away, our family moved into the same house with our grandfather for six months.  He had several strokes as well, and while not bedridden, needed care.  It fell to Mom to do this for him until he was moved to a nursing home in town.  If my memory is correct, it was during this time that Mom shared the information about her grandmother with me.

I was born ten years after my great-grandfather's death.  There are, obviously, no memories for me so I must rely on information provided through available documents.  That is why I would very much like to contact Gayleen as she may have memories of her grandparents.

Tracing the history of Hugh's life has been an interesting exercise. On the other hand, there is little to no information about Elizabeth beyond the dates of her birth, marriage, and death and the birth information of her ten children.  She raised nine living children, and lost her last child, aged 28 days, to bronchial pneumonia, when she was 43 years old.  Was this one of the reasons why the family left Ontario?

So many questions, so few answers.  I've been thinking about taking a trip out to Brussels, Ontario - perhaps next summer.  I'd like to visit the graves of the other family members and perhaps find the land that my great-great grandfather was granted in the 1850's. Perhaps I will be able to find distant cousins, as at least one of GG Hugh's nephews is buried in the same cemetery.

In the meantime, our cousin has hired someone to try to find the roots in Scotland.  If he has any success, that would a trip I'd love to take to visit the place where GG2 Hugh was born.  There are some family tales that we may have been related to the Stuart kings.  Wouldn't that be interesting!

Posted by Maebeme at 21:21
Email ThisBlogThis!Share to TwitterShare to FacebookShare to Pinterest
Labels: family history, questions