Winter walloped us a good one this week.  The weekend was nice and by Monday a lot of the snow from the first fall had disappeared. I'd scraped off the driveway and front walk and the deck out back was clearing.  Then on Tuesday the winds blew with gusts nearing 100 kph (62 mph). While it dried up some of the moisture that was left over from the snow melt, it also blew in a blizzard.

This photo does not do it justice. I can't capture the flurry of snow blowing, but you can see the snow that was blown into the window.

It took my son about 45 minutes to make the drive home from work - normally a 15 or 20 minute drive.  He said the streets were sheets of ice under the snow, and with the low visibility it made it worse.  I recall those after work drives and am even more grateful to be retired. 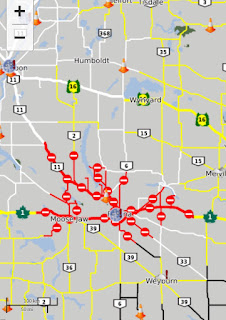 My younger brother and his wife were storm stayed in the city. Every highway in and out of Regina was closed. He sent me this image.  They actually have a second property here in the city; their daughter attends university and their son is working.

I spent a good 30 minutes on Wednesday afternoon clearing a 3 foot drift in front of the garage door.  I also cleared the front sidewalk and then around to the gate to the backyard. However, there was a drift on the other side of the gate so I wasn't able to open it.  My power meter is inside that gate, so on Friday I went around the back way and cleared it out - not that I expect the company to read the meter any time soon.  Based on last year's bills, they did it twice - the rest of the bills were estimates.

Knowing there was a storm on its way, I did my grocery shopping on Monday.  No issues with finding what I needed, but I'm thinking that may change soon. As most of you will know, there has been extensive flooding in the southern region of British Columbia, and on Vancouver Island as well.  Several highways have been damaged to the point that it will take weeks, if not months to repair or, more likely, re-route.  These are major shipping routes and while they be able to travel into the United States and then back into Canada, this will delay shipments.  The province has issued a state of emergency.  At least a couple of communities (Merritt and Princeton) were severely flooded, along with farms in the area.  Earlier this year, there were ridiculously high temperatures followed by forest fires. Now in just a day or two they received as much rain as they would normally in an entire month.  It's just devastating, as so many have lost their livelihoods, their homes and other property.

So while I may complain about the snow that fell, I can say with certainty, I'll take it any day over what has happened there.

This photo was taken mid-afternoon on Wednesday after I finished clearing the snow.  It continued to blow, but at least the snow stopped falling. According to the local weather site, we've got 12 cm (5 in) on the ground.  It looks like we'll have a reprieve until middle of next week when the next storm is expected to blow through.

Since I was stuck indoors (self and weather imposed) I started the process of Christmas decorating.  The three tubs from the basement were brought upstairs and sorted through.  There are items in the tubs that I am unlikely to use, so I tucked those in a separate box to take to Value Village or the Salvation Army thrift store. A couple of items were set aside for D as well.  The tree was set up on Thursday and the decorating started. Even though it is a small tree it will take a few days to finish; depending on where I'm sitting in the living room I get a different perspective and often move things on the tree around.  D says I do that at her house too. :)

While I was in the mood, I pulled out all of the gifts I've purchased and got those wrapped or put in gift bags.  They're tucked away in my closet. I still have a few gift cards to purchase and will likely pick up a few more small items this weekend.

I will be posting this blog on Friday because I'm taking a day trip on Saturday. I'm joining a group - Women on the Go tours - for a trip out of the city to several smaller communities in the area.  While the primary reason for the trip is to shop at local businesses, I'm taking my camera along with some specific points of interest in mind.  I'll likely blog on Sunday or Monday and share the results.  The cost of the trip was quite reasonable, and includes transportation, lunch, dessert, dinner, and shopping bags.  This will be the first time in a long time since I've been around this many people or eaten in a restaurant. We all had to provide proof of vaccine and we'll be wearing masks on the bus and in the shops.  While I still have some trepidation, it is time for me to step out of my comfort zone.  It will be lovely to get away from home for the day and meet some new people too.

This morning I had to run out to do an errand for D. I made a stop at the dollar store and was parked near this pile of snow.  This pile is one of several at the local mall that was cleaned up from the parking lot.

It was the first day I was out after the storm, and the streets are still a mess.  Especially on our neighbourhood streets.  There are sections where the wind blew the snow in and although there has been traffic through, it has yet to get packed down so there are deep ruts.  My son and another fellow helped a young guy get his vehicle moving again last night when he got stuck in a drift. We won't see a plow until spring so it will be there for the duration.  They were just plowing the major street a few blocks away with a couple of graders.  Good to see.

Have a great weekend everyone.  Take care and stay well.