Phew...I'm going to be happy to see this week reach it's end. It has been busy, tiring, emotionally draining, but with enough fun to make getting through it bearable.

Funny story to start. On Monday morning, I took the garbage out to the bin, and when I came to the front door it was locked. Thankfully, I have a pin pad on my garage door and was able to come through there. Another blogger, Carole had something similar happen to her and wasn't quite as lucky as I was. Happy to report she was able to get back into her home though.

I had a long list of things to do on Monday, and in between tasks I called a locksmith and was able to find someone to come out that afternoon. Upon arrival, he immediately pointed out that the door handle was backwards, and when he took it apart he discovered the latch had broken into several pieces. Since he was here (and a service call costs $80), I asked him to re-key some of the locks. We've lived in this house for over 11 years, and never had the keys for the door handle, only the dead bolt. When he went to back door, he noted the handle was also backwards and even better, the key for the front door dead bolt didn't work in the back door dead bolt. Good thing I never came in that way! He wasn't able to match the keys from the dead bolt to the handles but in about 90 minutes he had the lock fixed, the door handles facing the correct direction and re-keyed the garage door to the dead bolt key and provided keys for the two door handles. One more much needed task off the list of to-do's. I guess is was serendipitous that the latch broke when it did.

It was an expensive morning. I've been fighting with my range for several months but Sunday I reached my limit. Over time the heat elements weren't working properly and even on low heat, the temperature would be high enough to burn things in just a few minutes. I had made breakfast for dinner and after turning the one burner off, I was horrified to see that the burner was turning red though it turned itself off quickly. The stove was here when we moved in, so it was at 15-20 years old. Time for a replacement! Home Depot had a Cyber Monday sale, so I was at the store at 8:45 a.m. and 20 minutes later I had ordered a new stove to be delivered sometime between Dec 6 and 18 (hooray in time for Christmas). The stove was on sale, but better still I didn't have to pay for delivery and haul away. They also had an option of using their credit card and paying it off over 18 months with no interest. While I could have paid immediately for it, I always take the option of using someone else's money and simply make monthly payments so it is paid off within that period.

Groceries, gasoline, and gift cards were also on the to-do list that morning. At home I finished the envelopes for the gift cards, and except for our Christmas meals everything is now done and I can stay home and away from the maddening crowds.

On Wednesday, I headed out in the morning to visit D and Eli. She is having a particularly hard time right now, mostly because she turns 40 this Sunday. Her life is not what she dreamed of as a young woman, and she's finding it difficult to reconcile that the life she has now is most likely better than those dreams may have been. Eli's current struggles add to her feelings of inadequacy. We did have a good visit though and she was able to get her hair done on Friday morning before I left. Something to lift her spirits a little bit. 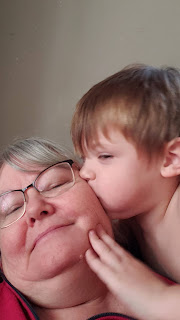 Eli and I had fun, as always. He is such a character! He really didn't want to go to school on Thursday morning; he would have preferred to stay home with mom and G'ma, but I asked him to make green choices at school and he did. He even told his teacher at the end of the day that he'd had a good day.  We had a few hours to ourselves on Friday morning while his mom was off to her appointment. Here's a couple of photos of the two of us. 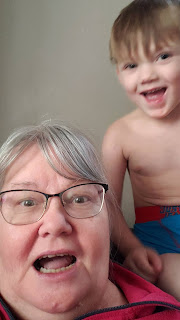 I was expecting a kiss but I got a zerbert!
This child really dislikes wearing clothing. He does wear his "underwears" when I'm there though. He does run warmer than most people do. On Thursday, I ran out to the recycling bin with some cardboard and plastic the new sofa came in and he came out without a jacket with me (he did put on his winter boots). I foresee a teenager who wears a light jacket and running shoes, no gloves, no toque, even in the coldest weather. Not surprising as my son is the same.
Speaking of my son, he too is having a bit of a rough time. I cannot share the issues he's facing but suffice to say, this momma's heart is aching that he is having to deal with what is happening in his life. I often wish I had a magic wand and could make all that is wrong in life right for my family (and for that matter, the whole world). Thankfully he has some wonderful friends who support him wholeheartedly and were there for him when I was not home.
The drive back home was tense as it was very windy. My little Toyota was buffeted by the winds, and I was exhausted by the time I arrived home. Traffic heading into the city was heavier than normal too, I assume because it was mid-afternoon. The highways were mostly clear, though the passing semi's sprayed dirt and moisture onto my windshield. That reminds me, I need to check my windshield wiper fluid level and make sure I have winter grade in the reservoir.
Today I'm relaxing; there are couple of curling events being streamed, and the Saskatoon Huskies football team are in the Vanier Cup (Canadian University Championship). I've got a bit of crocheting to work on too. Beyond that I intend to do nothing until it is time to put dinner on and battle with that darned stove again.
Hope you all have a wonderful weekend. Take care!
Posted by Maebeme at 12:47
Email ThisBlogThis!Share to TwitterShare to FacebookShare to Pinterest
Labels: adult children, grandson, having fun, shopping, weather