Winter weather, a shot in the arm, and a special visitor

The week started with fog and decent temperatures near freezing. My son took the opportunity to go out and visit D and Eli. He's off work for the next three weeks and he choose the perfect time to take the time off as it's going to be quite cold, at least for the two weeks or more. Daytime temps around -18C (0F) and nighttime temps a few degrees lower. These aren't unusual temperatures for this time of year, we've just had warmer than normal temps up until now and it takes a bit to get accustomed to it again.

I had an appointment on Tuesday at the car dealership to check out the skid plate(s) on the car. If you recall, in September I took it in to my local garage to have it checked out when I had a loud rattle coming from under the car. They added a couple of screws to hold it in place, at least temporarily. When I called the dealership to check out the price of a replacement, I learned there are actually three plates and since they didn't know which one might be the problem, this appointment was to check out the condition. How happy was I to hear that none of the plates needed replacement? Very, and they simply replaced the screws with the appropriate clips. Even better, there was no charge to me!

So I did what I do best, and took myself to Value Village and Salvation Army to see if I could find some deals. I picked up some items for crafting, as well as a Paw Patrol snack bag for Eli, a pair of OshKosh pants for Eli, and a cardigan and pretty t-shirt for me. Just about $20 for all of these items. The sweater would regularly have been $50, on sale perhaps $30, so I was very pleased with my purchases.

The sweater will be a lovely addition to my cruise wear. Evenings can feel cool, even on a warm Caribbean cruise. And yes, I do intend to cruise again in the future. How soon? That is yet to be determined.

In the craft items, I found a couple of packages of small Christmas ornaments for 99 cents each. I used one of the packages, along with a small wood plank and some tower blocks to make a tree.

I have several different trees now, some I've purchased and some I've made. They are displayed on top of my china cabinet. Add in some snowmen and I think I'll keep most of them up all winter...maybe even this one as I love the colors. It's a mini forest. :)

There was light snow on Wednesday morning. Not much accumulation but it blew around. I didn't need to shovel. Then the temperature started falling.

I was able to book my booster for Friday afternoon at the local Shopper's Drug mart. I had heard/read somewhere that the Sask Health Authority wasn't offering a clinic and appointments had to be booked at pharmacies. Imagine my surprise when I learned on Friday morning that wasn't the case and I could have gone to the drop in clinic nearby. Sheesh, I could have gotten it done earlier when the weather wasn't as cold. In any event, I've had my booster. Only side affect thus far is a sore arm. I know it's important to keep the arm moving, so I'll bake buns today. The kneading will work it out and some of the buns will be frozen for Christmas.

Friday wasn't very nice weather wise, but Friday night was ugggggly. We fell to a low of -27C (-16F) with a wind chill of -37C by morning. That's pretty much the same in Farenheit or Celsius. When I went out to feed the birds this morning, there were a dozen or so waiting in the neighbour's tree for me to fill the feeder. I don't think I'd even gotten into the sunroom before they had swooped in for a feed.

Speaking of which, I had a new visitor to the feeder this week. Typically I see chickadees for the most part, and of course one or more of the Hoovers (squirrels). I was excited to see this female Downy woodpecker. She was feeding on the suet and didn't immediately fly away when I came to the window with my camera. 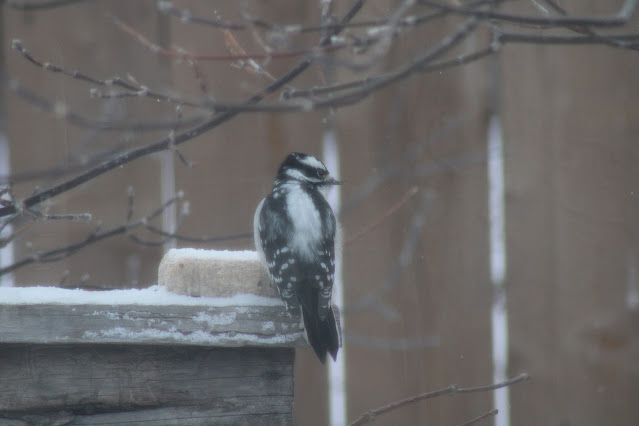 All the photographers out there will laugh at me. I use the auto focus on my camera because...well, I'm lazy and it is normally easier to let the camera do the work. When I went to take the photo of the woodpecker, this is the original take. 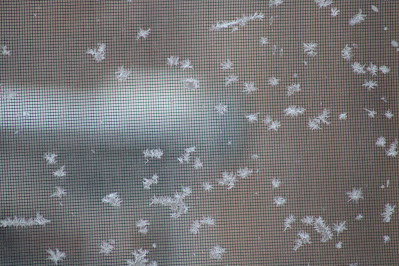 The auto focus would not focus on the bird, just on the screen window. So, for the first time in a long time, I switched to manual focus. It took me several shots to get the one above. It's still a little blurry but much better than the other attempts. Thank goodness the Downy was patient and stuck around!

I'm currently watching the final curling game of the European Olympic qualifiers, Denmark vs. Czech. Later I think I may catch some of an event that's being live streamed from Banff, Alberta. My latest scarf is about half done, and then I plan to get the finished ones washed up and delivered to a warming shelter later this week. They will be needed.

Have a wonderful week ahead everyone. Take care and stay well.