Taking it easy and spending big

Many of you suggested I was due for a rest this week after the busyness of last. I agreed. So there isn't a whole lot to share in this post.

The weather turned ugly again on Tuesday - we were supposed to get a storm Monday evening but it was kind enough to hold off until the following day. We didn't get a whole lot more snow but the wind blew. All of the highways in/out of the city were closed due to poor visibility. It isn't as bad here in the city. I took a photo out the kitchen window of the birds huddled up on the fence, waiting their turn at the feeder. The sun had peeked through but it was blustery out there. Cold too, the temperature dropped throughout the day. 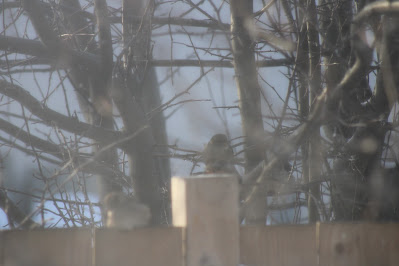 Wednesday was just plain cold again with the temperature at -29C (-20F) when I got up to feed Saku at 6:30.  It warmed up slightly throughout the day, but then a warm front came through and things were much improved after that. I can manage a single day of cold weather!
We had more snow overnight into Friday and it warmed up to near freezing. I shovelled the driveway and sidewalks and enjoyed the nicer temperature. Unfortunately it didn't last long as the temperature dropped throughout the day. This morning, it was -17C (1F). It has been snowing off and on all morning. I'll head out there shortly to shovel once again. We've had enough snow that the the city actually plowed our street. Of course they left big ridges of snow on our sidewalks, which we're expected to clear. :p
Since I wasn't doing a lot of houswork, I spent a good deal of time on Ancestry focusing on my father's side of the family. There is new information available since the last time that I did a review. More exciting (at least for me), is finding a distant cousin here in the city. I've sent her a message as I was hoping she might have more info on my paternal grandmother's side of the family. Her great-grandfather was my grandmother's brother. There is little info for this branch -  just census data from 1842 for my great-great grandfather and his wife, and I located their marriage certificate in the UK, but nothing prior. Nor did I find any evidence of his death in Canada. She got back to me quickly and sadly, she nor her mother met the great/grandfather and she wasn't able to provide anything more. However, she did suggest we meet sometime this spring or summer - I think it's a great idea.
My other big task was ironing clothing that D plans to take to the consignment store on her next visit to the city.  I might have left it until she got here, but the chances of her getting it done in the short time she's visiting is slim to not at all. With the ironing board set up in the living room, I watched television while I worked on it. It is all children's clothing, items that Eli has grown out of....and a few pieces that still had their original tags.
Oh, and the other big (ticket) item on the list was meeting with the contractor about the basement renovations. He arrived on Tuesday afternoon, armed with a pencil and paper, measuring tape, etc. We walked through the basement and I explained what work I was looking for. He was able to explain what needed to be done in order to get what I wanted, and provided a few different options for doing the work including the products to be used. When we finished discussing the work, he spent another 20 minutes or so taking measurements.
As he was leaving he recommended I get another quote - I'd told him I probably wouldn't since I'd seen the work he did. But, after some thinking about it, I decided to do so. On Wednesday I reached out to another local contractor based on reviews in the Better Business Bureau listings. He called and we arranged for him to walk through the same afternoon. Hmmm...quite the difference. He showed up with a business card, no paper and pencil, nor anything to take measurements with. As I explained what I wanted done, he told he couldn't do it because a couple of the interior walls are not floated. He told me he'd have to get a permit, and basically the entire basement would have to be gutted to ensure all the walls are properly floated to code. Then he went on to tell me he didn't like my design ideas for the room, and he'd create a drawing to show me what he would recommend.  Before he left he gave me a verbal quote....and I just about collapsed on the spot.
In the meantime, J had e-mailed his quote, and after reading through it I immediately called him. I asked about the permit and he explained we would only need the permit if the basement was being developed. Since the room already exists, and I'm merely adding an interior wall, this wouldn't be necessary. Phew! We went through his quote, and while it is somewhat higher than I had hoped, I do know that the work will be done properly and within the limits of what I have requested. I'm also well aware that the costs of construction material have increased significantly in the past two years.  Maybe I'll get lucky and prices will drop in the next few weeks. Ha!  So we're tentatively scheduled to start the big project at the beginning of April. This will allow Saku and I to spend our days in the sunroom and away from the noise.
I'm heading to visit D and Eli again on Monday. She has a telephone appointment with the psychologist who will be assessing Eli. He advised the appointment will take up to two hours for their conversation. That's too long for Eli to play quietly while she talks with the doctor.  While she normally would have asked a friend to take him, one family is currently in isolation as one of their children has Covid, and the children of the other family were exposed to Covid at daycare this week. D has keeping him home and limiting their contacts as she wants to get him through these important appointments first. So far, so good. I'll drive up Monday afternoon and come home on Tuesday.
I'll leave you with a photo of a visitor to the yard yesterday. It's a Hungarian partridge.  It and several of it's friends were hanging out on the roof of my house when something startled them. I wasn't quick enough with the camera to catch them. Have a great week ahead everyone!
Posted by Maebeme at 10:58