I made it home on Sunday by mid-afternoon, just in time for another curling game. In the morning, I'd gone out to shovel a bit more to clear out part of the alley way, as the snow clearing crew had yet to come through. There was enough truck and SUV traffic (neighbours across the way and next door) that I figured I could make my way out with my smaller Corolla. There was one spot right at the street that was heavy going but I made it through. Staying for the extra day meant the highways had been cleared and it was smooth sailing from there.

C had shovelled the driveway while I was gone, but the sidewalk to the backyard needed clearing. On Monday I went out to feed the birds, and shovelled my way there. Unfortunately, I twisted something in my lower back and hip when I lifted some of the snow. I kept moving for most of the day, as I found if I sat it was worse when I got up. Tuesday was slightly better, and that has been the pattern, each day there is less pain and more ease of movement. Though I must admit, I gave up on wearing socks for a few days.

We had blowing snow on Tuesday. It wasn't as bad here in the city but the highways leading in were in rough shape. My brother texted to tell me he was taking the day off because of the highway conditions. It turned out that was a good thing, as he spent much of the morning getting vehicles out of the ditch near his home. His neighbour, pulling a snowmobile trailer, slid into the ditch at the end of his driveway. R went out to help - they were able to get the trailer out with R's truck, but had to get another neighbour with tire chains on his vehicle to pull the truck out. Meanwhile that second neighbour's daughter's vehicle was in the ditch further down the road, and the tow truck arrived just as they finished to winch her vehicle out. Full morning! There are reasons I'm happy to live in the city. (If you've ever heard the Corb Lund song "Truck Got Stuck", you'll know what this scenario reminded me of.)

I did go out that day to the nearby Canadian Tire to have the headlight in my car replaced. I've been driving with a single headlight for awhile now, and finally got around to making an appointment to have it repaired. Did you ever play the game paddidle/perdiddle as a kid? I wonder how many kids scored a point from spotting me. I'm not sure why but when I realized I had a headlight out, I started noticing a lot more vehicles that also had that problem. Back at the store, I wandered the aisles while I waited for the work to be done. I was home within an hour and didn't buy anything else.

The cold weather has stuck around for the past week, Thursday was cold and the winds picked up again resulting in more blowing snow advisories. D and Eli had planned to go to his therapy in a nearby community but she (wisely) decided to postpone the appointment and stay home.

I headed out early in the morning to pick up a few groceries. The biggest purchase was bird seed. They're going through it quickly, helped by the Hoovers and a rabbit/hare that has found a way to wiggle beneath the gate. The latter leaves clear evidence it has been below the feeder. The photo below includes a bird I'm trying to identify. It's the one on the right and appears to have a red streak on it's back or tail. I've sent the photo to my brother but haven't yet heard back from him. The photo isn't very good, it was obviously shot in low light, and I was shooting through the sun room window, as far away as I could be, because each time I got closer the birds flew away. 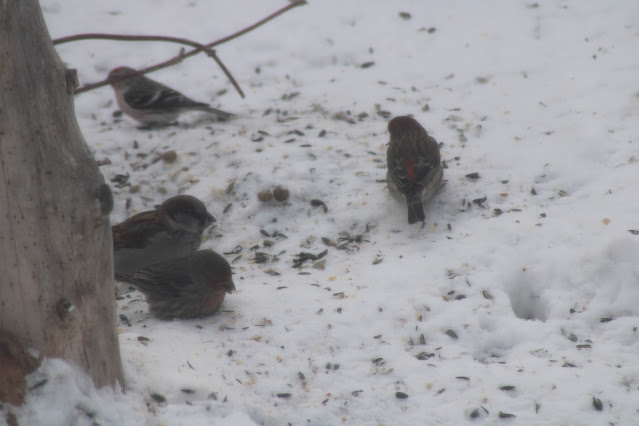 By Thursday evening, my back was giving me grief again. This time it was my upper right shoulder. Darned if I know what I did, but I must have pulled a muscle somehow. It resolved fairly quickly, as I'm feeling much better today. The hip/lower back pain is negligible by this point, only a bit of pain if I make certain movements.

Thank goodness for curling, as I wasn't up to doing my normal cleaning routine. I did manage to get in my steps though, as sitting for prolonged periods was harder on my back than standing or moving, so I spent a lot of time pacing during the breaks in action. I did manage to get the laundry done, filed my income tax return, and worked on Ancestry. I've been trying to determine how my 3X great grandmother immigrated to Canada about 1852. She wasn't married yet, so I'm assuming she travelled with a family, likely as a domestic. From my research, thus far, it appears she was the only member of her immediate family to immigrate.

Oh, in answer to a question on the wordless Wednesday, that was a Hungarian partridge. It had perched itself on the top of the pile of snow from the neighbour's driveway. I'm not sure why because it was least sheltered area and the wind was howling at that point. Silly bird.

I did have a welcome visitor to the yard yesterday. 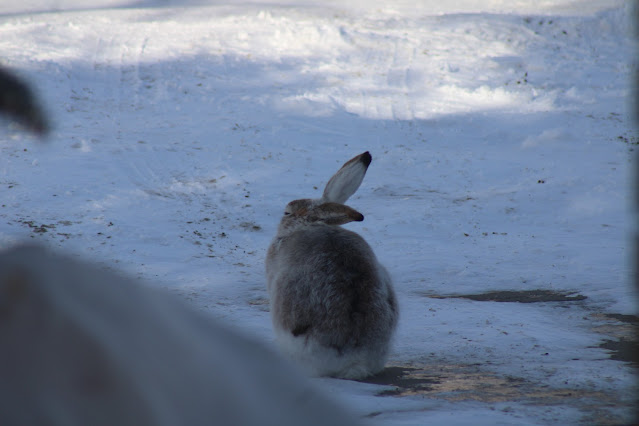 Check it out - it is mostly brown! Spring must be coming or else it is overly optimistic. Actually the temperatures are on the rise today. We're expecting to reach 3C (36F) later this afternoon. Unfortunately the warmer temp means the possibility of rain. That will help melt the snow, but will freeze overnight. I'd appreciate the wind now as it would dry up the moisture quickly. It's that time of year and it won't be long before, like the hare, there will patches of brown to be seen.
On the topic of curling, here are two more games today, and two tomorrow. Our Saskatchewan men have made it into the playoffs.  A win this afternoon and they'll have the opportunity to play again tomorrow, a loss will take them out.
And on that note, I'll wrap this up, wishing you all a good week ahead.