It was a very good start to the week. While our Canadian women lost the semifinal, they did play for the bronze and won. They were playing Sweden, a very strong team and the game went back and forth but our women prevailed. We haven't won a medal since 2018 in women's world curling so it was a huge success for our team.

On Monday, I went for my first outdoor walk of the season. While I walk daily indoors, I sure the feel the difference when I get outside. I suspect it's the speed at which I walk and the changes from sidewalk to grass, etc. Of course I took my camera! 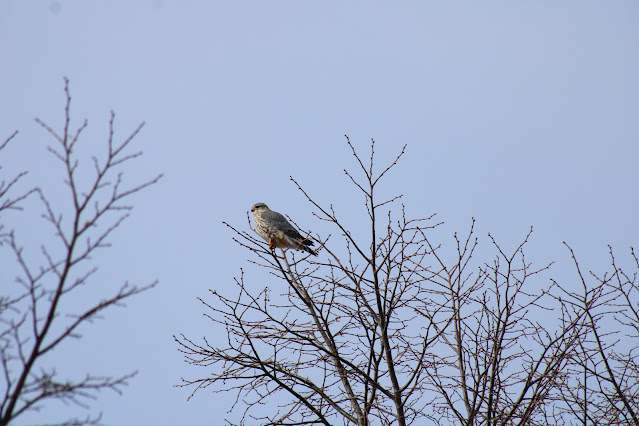 I've heard the merlin, but hadn't seen it before. It flew across the street just as I was walking down the sidewalk, so I crossed to get a few photos. My brother R says it doesn't generally prey on small birds, usually bugs and mosquitos, but since neither of those are prevalent at this time of year, I suspect my poor wee bird friends are in danger. The first time I saw the merlin it was in my front evergreen feasting on a sparrow. :( 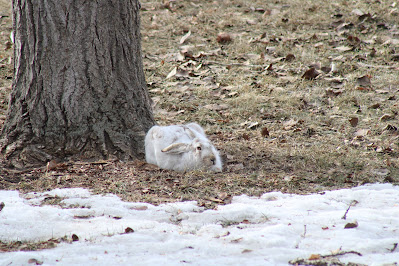 I walked through the park nearest to my house and won't do that again for a week or so. The paths aren't entirely clear and in many spots there is a build up of ice. This hare was staying out of the wind. Not much brown on this one. 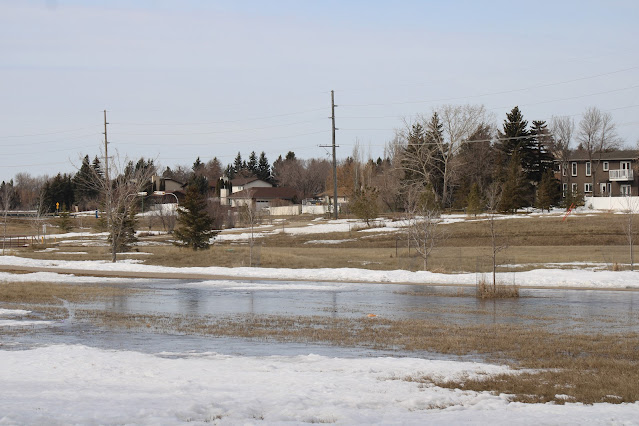 Lots of water in the large park near the creek. Most of it covered in ice. But I spotted a duck flying in that appeared to be landing on the creek so I walked through the grass to check it out. 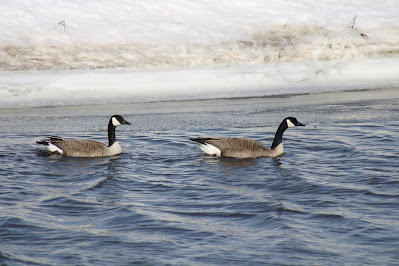 Open water! You can see the ice along the edge so I can only imagine how cold the water would be. There were several pairs of geese and a few ducks on the water and a few more on the banks of the creek. (I didn't get one of the ducks because they were further along the creek and it was a bit muddy) 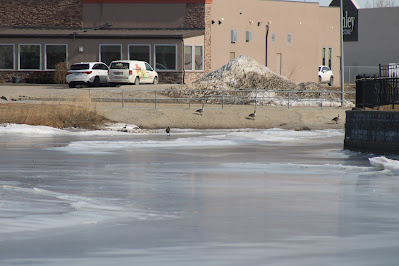 From there I headed over to the pond. No open water there! FB memories tell me that on March 29 last year the pond was swarming with geese and ducks. Much quieter this year!

It was so nice to get out for a walk, even with a cool wind. It was -1C (30F) when I left the house and two degrees warmer when I arrived home 45 minutes later. I made a cup of tea and settled in to relax and watch some home improvement television. Have you seen Backyard Builds? I do enjoy the work they complete but the amount of money that gets spent doing it, not so much. I know I have work to do in my back yard and I'm not looking forward to it.

The rest of the week was generally quiet. I did get out for walks on both Wednesday and Thursday. The new header photo was taken at the pond on Wednesday. I had waited until the afternoon for my walk when the temperature was above freezing. The goose was standing in the water on top of the ice. I thought the color of the sky reflected on the ice was pretty.

Thursday was also grocery day. I'm shopping sales for the most part and am lucky to have three grocery stores within a five minute drive of my home. I did a circuit of the three stores, with a stop at the drug store to pick up a prescription for my daughter. It seems prices at the grocery store are going up every week. I keep my grocery list electronically (use my Google mini) and check the Flipp app for the flyers before I head out to the store. That morning, I asked Google to add "my bread" to the list and when I pulled up the list in the store I laughed because it read, "Mike red". Apparently I have a speech impediment or something. :) Just to give you an idea of the crazy prices, I bought my whole grain bread at Walmart, 2 loaves for $6.  The same loaf of bread at the Co-op store was $4.99. It wasn't much less at Safeway either.  Perhaps I need to start baking my own bread. 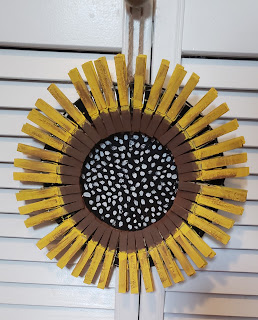 At some point, I wandered into the craft room and did some sorting. There is a box of items that can go to the thrift store as I know I won't use them. There are few things that have been sitting around too, mostly mending, and my sunflower wreath. It isn't perfect, and I'll never consider myself an artist, but I like the way it turned out. I used a wreath ring, a couple packages of clothespins, a piece of black felt, paint, and some hot glue. It's meant not only to welcome summer but as a homage to the people of the Ukraine.

Regular cleaning was completed in between walks, shopping, and catching up on television programs. The men's world curling starts later today. You all know where I'll be. :)  I had picked up a set of sheets at the thrift store last week - those were laundered and put on my bed on Friday. I had been using a cheap set of 300 count sheets and these are 500 count. What difference that makes...and all for $15. I also got a couple of new to me books that I hope to get to sometime in the next week. In the meantime, I had bought a bag of lightweight yarn at the thrift store and have started a little dress for a 2 year old. There isn't enough to make anything for Eli but I know D has friends with small children and this will make a gift for someone in the future.

I'll end this post with a photo my brother sent me from his camping trip last week. He had a wonderful time with his friend C. They had to trek into the lake, about two miles, so loaded their supplies on two sleds. It's a bit hilly there so he told me they would ride the sleds down the hills on top of their items! On the way in they passed a couple of park outhouses so they shovelled their way into those. At the camp site, they had to dig an area out for the tent. Their first choice was thigh deep on my brother (he's 6'3" tall), so they moved to a different spot where the snow wasn't as heavy. They did some exploring and visited three different lakes in the area. Ice fishing provided their dinner one night, and C took a few fish home with him. R said that the wood stove kept them warm most of the night and he's looking forward to his next opportunity to winter camp. 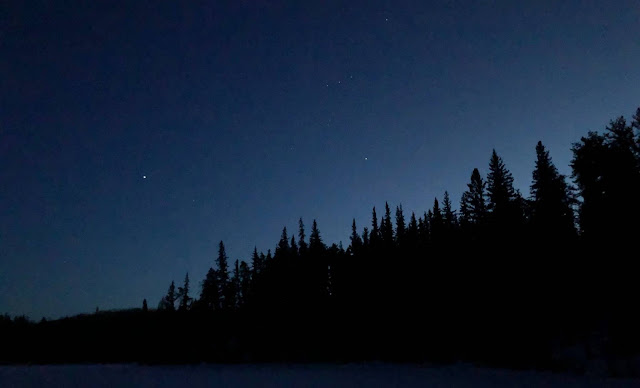