Monday was a vacation for my son, so it was a quiet day. I puttered around the house, finishing painting in C's bedroom in the basement and got a few chores done in the afternoon. It warmed up enough in the sunroom that I was able to get out and sit with my tea and read. This latest book was "the last time i saw Paris", by Lynn Sheene. "May 1940. Fleeing a glamorous Manhattan life built on lies, Claire Harris arrives in Paris with a romantic vision of starting anew." Of course, this was the start of German invasion on France and things don't go as she had hoped. The story tells the tale of survival despite the odds. I very much enjoyed it.

I was able to finish the cotton bag I started last week while watching curling. It's about the size of a beach bag. There is enough yarn left over to make a few dishcloths as well -3 are complete with one more on the hook.

Tuesday was a very busy day. I started with my grocery shopping, and once home with those put away, I gathered up my laptop and headed for my niece and nephew's home across the city. Both needed to file their income tax returns and I offered to assist. After some false starts we had the program loaded and the returns completed. Both did very well, entering the information into the program with a few hints and suggestions (even I learned a couple of things) and then our visit turned to travel.  My niece L is heading to Europe in May with several friends. One of her classmates lives in Prague - which will their first stop. Then it is onto Berlin, Rome, Paris, and finally London. They'll only be there for two weeks so it is going to be a full and busy trip.

Since I had my laptop with me, I was able to pull up the photos I took in Paris on our TransAtlantic cruise in the spring of 2014. We only had a few hours in Paris; our ship had docked at Le Havre, and the bus ride was three hours each way, so I didn't see much but shared with her some of the highlights. It certainly brought back a lot of happy memories.

From there I headed over to the salon to get a haircut. I haven't been since June 2020 so was due! The hairdresser took off about 2 inches and cleaned up the bangs that I've been trimming myself. She didn't even give me a hard time about how uneven the bangs were...though I would not have blamed her if she had.

It started snowing about 4 p.m., but it didn't last long and melted on the pavement pretty quickly. When I drove past the pond where the geese and ducks congregate, I noticed it was frozen over again. Those poor birds. Speaking of birds, I had some unusual visitors to the back yard in the last week or so. 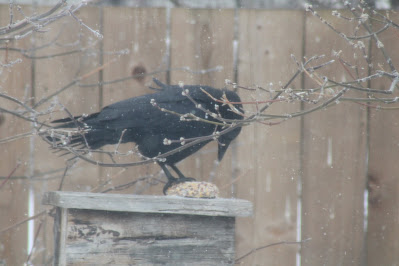 I was surprised to see the crow at the feeder. It was certainly enjoying the suet.

The second visitor(s) were a pair of magpies (second one was on a higher branch). I've seen them in the park before but never this close to the house. 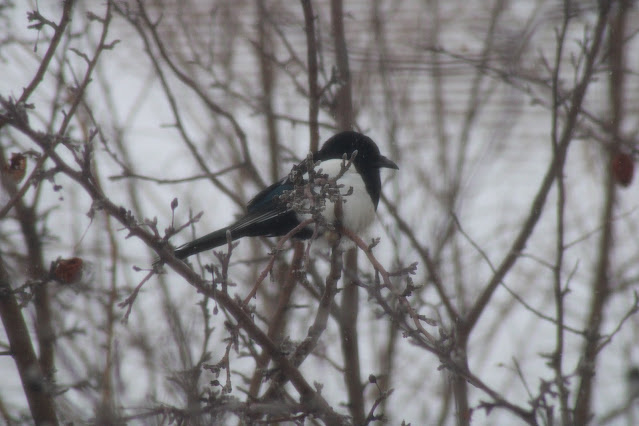 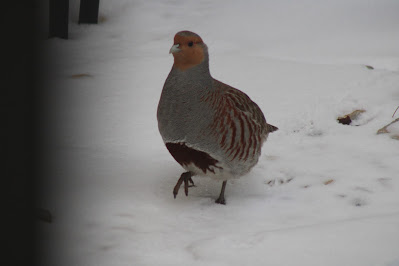 When I went out to feed the birds on Wednesday morning, I startled a pair of Prairie chickens on the deck. They crowded themselves into a corner before they turned and flew up to the roof of the house. When I came in, I happened out the front window and spotted them again. This one was heading for the back yard again. I always put a bit of feed on the ground for them and I suspect they were heading for breakfast.
Later that morning I headed out to get some bird seed that I'd forgotten the day before. Then I headed over to Value Village to look for a sheet for my son's bed. I noticed the bottom sheet he had was looking worse for wear when he moved upstairs. I found a flat sheet, not fitted, that would work for just $6. At home I washed and dried it and remade the bed for him. It was a pretty quiet afternoon; I caught up on some PVR'd television while knitting, but roused myself enough to make a batch of banana bread.
We had more snow, interspersed with rain on Thursday and Friday. I stuck close to home, did some knitting and caught up on PVR'd television programs with a few household chores thrown in for good measure. A fellow from the local utility company showed up both days to do some marking in the back yard. He informed me that Sask Power will be doing some trenching in the neighbourhood for new lines sometime next week. I hope they do a better job of filling in than the other utility companies did two years ago. I know I still have some work to do in the backyard after removing the shed but I don't want to have to do more work because of theirs. 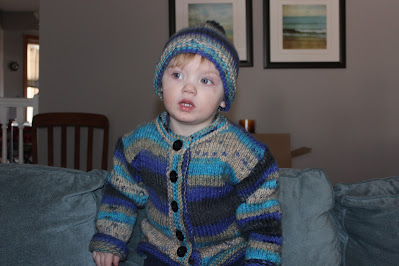 I did run out on Friday morning to Michaels. On FB, I belong to a crocheting group and someone posted yarn was on sale. Eli has basically grown out of the last heavier weight sweater that I made him. He was just two when I knit this one, and it was a size four. The newest one will be a size eight and hopefully will fit for a few years. It's a hoodie with a zipper and I've never put a zipper in a sweater so this will be a learning opportunity (and challenge) for me. This time I'm using a solid green - the last sweater I ought to have done a better job of matching the pattern in the yard. I realized that when I got to the sleeves.
Today I'm continuing the pattern of watching PVR'd television and knitting. It's a dreary day, overcast, cool, with light rain falling. It should hopefully melt the snow, at least until the snow starts falling again tonight. :( The forecast suggests warmer weather isn't in the forecast for another week.  I had planned to spend my days in the sunroom with Saku while the construction crew is here but I suspect we'll in my bedroom for the mornings. I haven't heard from Jason so assume they'll be here Monday morning. If there is enough sun in the morning, we should be able to move out to the sunroom later in the day.
Have a good week ahead everyone! Stay warm and dry.
Posted by Maebeme at 09:52
Email ThisBlogThis!Share to TwitterShare to FacebookShare to Pinterest
Labels: birds, crochet, family, knitting, travel, weather