Other than bouncing off the walls, counting off the days, what have I been up to this week? On Monday, I had hoped that Jason and his crew would be here to start the basement renovation. But that was not to be. I called him that morning to see what was up and he told me that one of his crew had gotten Covid the week before so they were delayed once again. (It would have been nice if he had called to tell me). On Tuesday I received a text saying they would be here on Wednesday afternoon. While here, he and his one helper Carter walked through with me, and confirmed the work to be done, did some measurements for the supplies they'll need.

After talking to Jason, I was a little annoyed on Monday so went out to do some retail therapy. Nothing exciting, cat food and bird seed, some peanut butter, and knitting needles. I had the right size of circular knitting needles to start Eli's new sweater but they weren't long enough for the finishing as I need to add the body and sleeves to the same set of needles. My original needles were 16", I needed at least 24". From there I went to Home Depot to try to get burner element for my range. Last week I had a pot lose a chunk of enamel on the burner - the burnt on enamel would not come off so I needed to replace the burner. Home Depot doesn't carry such things, and I was referred to a local business. I called there and determined they had the part I needed. I headed over and picked it up, and OUCH...it was $85 just for the element. Next up was the Salvation Army thrift store where I found a book to take with me next week...if I don't finish it before I leave. I'll take my Kobo too but I do like a real book. The book I picked up is Sandra Browns, "The Alibi".  At that point I decided I'd had enough retail therapy.

Tuesday was a cool day, but I did get out for a walk. It was just above freezing and the wind was blowing making it feel much cooler. Most of the wildlife was hunkered down - I saw a pair of ducks at the creek, three hares in the grass near the condos, a pair of robins in the grass, and a lot of geese and few ducks at the pond. While I took some photos, there was only one I think is worth sharing. 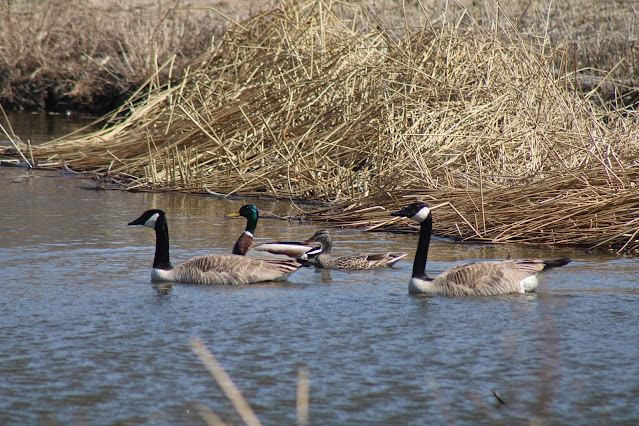 I've also been watching curling. :) The World's mixed doubles are underway in Geneva, Switzerland. Our Canadian team played well all week, losing only one game to Scotland through the regulation draw. Sadly, they lost to Norway in the qualification round and are out of the running.
While I'm watched curling I've worked on Eli's sweater and finishing a couple of other projects.

This is the scarf I started while the Grand Slam was underway. It's made from the extra yarn I bought for the little dress in the next photo. It isn't a long scarf, but will be nice for under a jacket. It will likely be in my suitcase for the trip.

The other project is this little dress. I've no idea what I'll do with it, but loved the pattern, had the yarn and had to make it. The ruffle needs to be tacked down, and the little flower attached. I looked through my sewing items and I don't have a hook and eye for back closure. I'll have to purchase a zipper for Eli's sweater at some point so I'll pick the fastener at that time.
Eli's sweater is coming along nice too but I don't expect I'll finish it until I return as I've set it aside for now.
Thursday was the day our weather changed for the better. And that means I want to be outdoors or at least in the sun room. Carter arrived about 8:45 that morning, along with the rubbish bin drop off. While he toiled in the basement removing the carpet, underlay, and tack strips, I spent the morning puttering and then headed out the door to clean up the front patio of winter debris. I swept up the leaves, pine needles, and pine cones on the patio and driveway and almost filled a large garbage bags. Then I checked with Carter as there have been some pieces of wood, which were left behind by the former owner, that I've been wanting to toss. He told me to go ahead as they won't fill the bin (and I'm paying for it). I was happy to get that cleaned up as well.
Something funny about the basement demo. We discovered under the carpet at one end of the room, that someone had drawn out on the concrete plans for a large wet bar. Imagine if you will, a u-shaped bar, with a front and back counter, a sink and bar fridge, and glass shelving above. It obviously was never built but someone had grand ideas. :)
By Friday afternoon, a good part of the new wall and bulkhead was up, the upper level of what was a pony wall had it's framing as well, and I was now the proud owner of a small pump for the furnace run off. The furnace runs the a/c unit as well, and had a run off hose for the excess water. The hoset ran across the furnace room floor and out to the sump hole in the unfinished part of the basement. Carter mentioned it was going to cause issues with the new wall, so I agreed to have their plumber come and put in the pump. The hose from the pump is run up and through the drop ceiling, into the laundry room, across the ceiling and down into the same drain as the washing machine. It looks so much better as it is totally inconspicuous unless you know where to look. This turned out to be a very spendy week.  On the other hand Jason is giving me oak baseboards they took out of the last two jobs. He said they aren't quite the same as my originals (that will be going back in the main room) but my feeling is, since the baseboards will be a separate room, the difference won't be noticeable.
Today, I've got the bronze and gold medal mixed doubles curling games to watch. Both games were played overnight (for me) so I PVR'd them to watch this morning. At the moment Germany is beating up on Norway, leading 3-1 after three ends. Lots of time left for Norway to make a come-back with five ends to go. Both are great teams and I have no favorite. The gold medal game will feature Scotland and Switzerland. In this game I'll likely cheer for Scotland.
Later I want to get out for a walk.  Our temperatures have really improved - yesterday we had a high of 15C (59F), and today's forecast is for 14C (57F). It does look like it might rain but that's okay as I don't melt, I just wish I would. :) There is laundry and vacuuming as well, and definitely some time on the patio or in the sunroom to continue reading.
Have a wonderful weekend everyone and a great week ahead!
P.S. There likely won't be any post next Saturday unless I can access the internet at the hotel before I leave to for the cruise ship. I've not bought the internet package on the ship either so until I'm in a port where I can pick-up free WIFI I'll be off-line.