What's on my mind

Fall is finally here, after a brief interlude with winter.  Yes, we've had snow and cold...but the last couple of days have been absolutely gorgeous with temps of 17C and 19C (62F to 65F).  The sunshine has been absolutely wonderful to see and I've been able to open up the sun room for the cats to nap.  Sasha especially appreciates the warmth on his old bones. 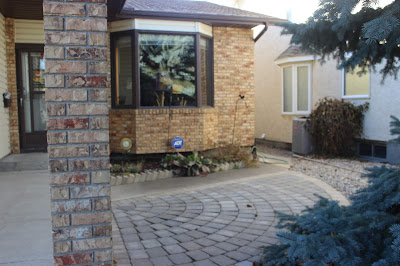 I finally got the containers all cleared out and the rest of the garden related items put away.  It's sad to see the front patio empty and it is even more sad to think I rarely sat out there this summer.  Perhaps next year will be different.

My neighbour's have their house up for sale again.  They had it on the market in the spring, but saw very little action.  It's back on the real estate site with a price drop of $35,000 and new photos.  I think there were a few visitors yesterday - just based on unknown vehicles.  I'm sure they were trying to get a higher price because they had the garage floor and driveway re-poured a couple of years ago.  Unfortunately the real estate market here has declined due to over-building.  Even so, I'm pretty certain they should recover what they originally paid for the house plus a little more.  Our crescent is just a few blocks from an elementary school, as well as close to several shopping centers, while being at the quiet end of the street.

It worries me a bit, as I plan to put my house on the market next spring.  I'm hopeful that the improvements I've done will have maintained the property value.  I don't expect to recover the costs but don't begrudge having done so, as it has added to my enjoyment of living here.  However, I'm in no real rush to sell, every mortgage payment I make should mean more in my pocket at the end of the day.

Time keeps ticking along, as it always does, but these days I'm more cognizant of it then ever.  I've yet to get down to hours, but the way I'm counting time until I've finished in the office is becoming more varied.  As you know, I have my marble jar looking quite empty with the last few marbles (3).  One more marble will come out in less than two weeks, and another at the end of November, ensuring I'm left with one...so that I don't entirely lose my marbles before I leave.

I have just 6 weeks remaining of work, and will spend just 21 days in the office over that period of time.  I reduced the time by one day because I'm taking vacation to attend a retirement luncheon in Saskatoon for one of my closest co-workers.  21 years ago, she and I started work - she in Saskatoon and I in Regina.  But there were just two of us in Regina so we were sent to her office for training.  She and I sat next to one another for the four weeks.  We didn't keep in touch then, but when our two offices were amalgamated we met again and over time became close.  I'll miss our daily chats.  We'll keep in touch through text and Facebook when she leaves at the beginning of November.

On a totally different note, is anyone else sick and tired of all the media hoopla about the legalization of marijuana?  At first it was interesting (and somewhat amusing) to see the proponents and opponents present their conflicting view points, but after awhile it was simply tiresome.  If anything else happened around the world on October 17th we sure didn't get to here about it, at least on our news channels in Saskatchewan. 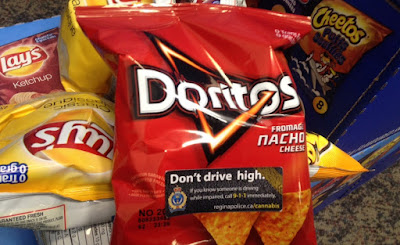 My brother sent me this photo; he works at the front desk of the local police station.  They were handing out potato chips (and have continued to do so) with a warning label.  I have to say, I think it sends a mixed message....if you've got the munchies drop by the station and we'll save you a trip to 7-11, just don't drive.

To be honest, the news around the world is so depressing and often ridiculous these days, that even a news junkie like myself are starting to turn off. Wild weather, economic warfare, divisive politics, and the entrenched and inflexible viewpoints are wearing.  When did we get to the point where a civil conversation is impossible, where one must make one's point as stridently as possible, and heaven forbid we show any sort of open mindedness.  Sigh...

But there was one good news story that caught my eye.
These big boys were being housed in a shelter in Edmonton, Alberta.  How they came to be there, I've no idea.  But the shelter wanted to ensure they were adopted together as they showed anxiety when separated.

When the story hit the news there was no shortage of interest, with over 200 inquiries.  Fortunately a home with large one acre yard and another dog to play with was found. Can you imagine, just the food bills alone would run close to $300 a month!  They sure are a handsome trio, and I suspect a handful too.

Back on the home front, I'm posting this on Saturday as I'm heading out to Melville tomorrow.  It has been a couple of weeks since I've seen D and Eli - G'ma could use some little boy cuddles.  We face-timed Friday morning and he was far more excited to see Saku and Sasha than he was to see me.  I guess that tells me where I sit on his priority list. :)

I'm off to do more housecleaning before the Rider game starts this afternoon.  Hopefully they'll show up to play this week; last week's game was a real stinker!

Have a great week everyone!