Keeping on, keeping on

Snow, miserable snow.  D and Eli left earlier than planned on Monday due to the continued snow and blowing snow. After they left, I thought they might have stayed another night, but then checked the forecast and was glad they made it safely home.  We got more snow overnight, the temperature dropped to -11C (12F) and the snow continued through most of the day.  Oh, I had so hoped not to bring out the snow shovel just yet! 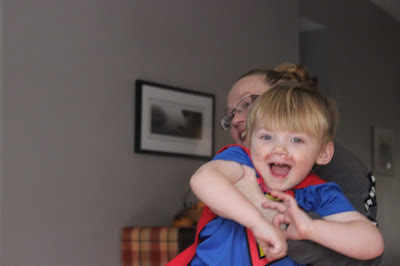 We got Eli into his Superman costume, most of it anyway, before he decided he'd had enough of that.  D had to "fly" him around before he decided that it wasn't so bad after all!  Excuse the dirty face.  He's had a cold and between the area under his nose that is rubbed raw and the cookie he ate, he's a mess. :)

Due to the nasty weather, I stayed home Monday but did make a trip to the grocery store on Tuesday to grab a few items.  I'm having fun with my new Google mini - I simply ask her* to add items to a grocery list and pull it up on my phone when I get to the store.  No matter, I still bought more than was on my list.  Safeway had pasta on sale for $.99 a box so I grabbed a couple more for the pantry.  I know that comfort food will be high on my list of go-to recipes as the weather gets colder still.

I'm getting back into my routine, with coffee on Wednesday and dinner on Friday with C.  I wish I could say she's less depressed about the separation but I suspect it will be some time yet before she's truly ready to move on, if ever.  Meanwhile we find other topics to discuss.  I went to my stitch and chat group as well; this week there were eight of us working on various projects.  One of the women, just started coming last week.  She'd picked up a crewel needlework kit from a thrift store.  None of us have done crewel stitching, so as she is learning so are we.  There was knitting, cross stitch, embroidery, a quilt in the process of being hem stitched, and someone cutting out pieces for a quilt.  I took along some table napkins to stitch - will show them off when they are finished. 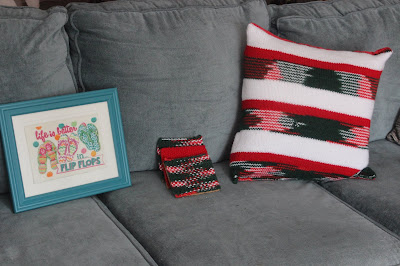 I did get a few things finished this week. On the left is the framed counted cross stitch project which I will give to my friend C for Christmas.  I know she doesn't read the blog so I'm safe to show it here.

On the right is one of the pillow covers I knit using leftover yarn.  For the backing I used the last bit of cloth from Eli's Superman cape.  To finish the cover, I sewed it on my machine on three sides, inserted the pillow form, then whip stitched the bottom closed.  I can easily open that side up, and replace the cover with something else after Christmas.  I need to pick up another pillow form ($10) to finish the second pillow.  There was still a bit of yarn leftover so I used it to make small squares for coasters.  These I hot glued to squares of cork board for backing. 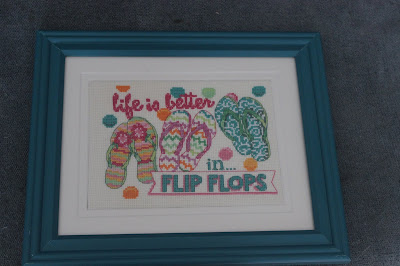 It did warm up a bit mid-week but unfortunately all that did was create wet streets and sidewalks that froze overnight and became skating rinks.  So Thursday I was hard at the house cleaning to increase my steps and activity.  I swept, vacuumed, and washed the floors upstairs before heading down to the basement to give it a good cleaning.  (Other than vacuuming, cleaning cat litter, and washing the floor in that part of the basement, it hasn't had a good scrub for a few weeks.) 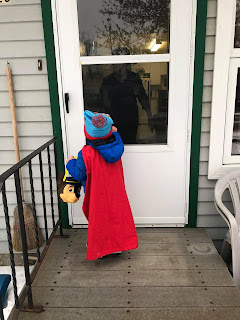 Saturday was another day of football, with our Riders playing the Edmonton Eskimos in the first game.  Our starting quarterback was injured in practice this week and did not play.  No matter, we still won and have clinched first place in our West Division.  This means the team won't play until the division play off on November 17th...best of all they'll be at home.  It gives the guys a couple of weeks off to rest and recuperate, practice and watch video.  Well deserved!

The later games had less significance (at least to me) but I watched portions of both before heading for bed.  In the midst of the third came I had a text from my former real estate agent.  Another agent, who had shown the house earlier, was reaching out to see if I would be amenable to an offer lower than asking.  After a brief back and forth between us, Curtis texted her back to say "maybe, and how much lower?"  She did get back to him saying she'd let her client know and they would look at the recent Solds again.  So, who knows there may be another offer despite the house is no longer listed.  Again, I'm not holding my breath.  It just seems this saga is never ending.

Sunday is a day of rest.  I'll watch some NFL football, work on a crochet project, and if I'm feeling really ambitious, I'll do a little baking.  I took some bananas out of the freezer to make loaves which will likely end up back in the freezer.  I made two batches this week, chocolate chip drop coookies and cranberry ice box cookies so we don't need any more baking to tempt us.