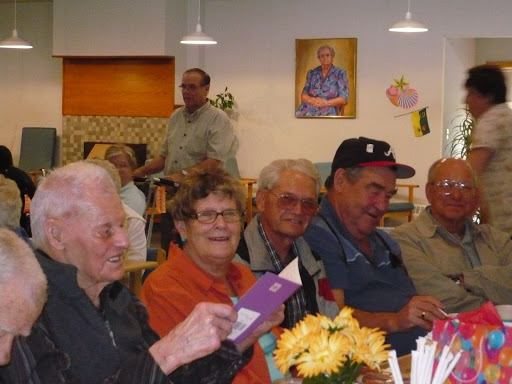 Today would have been Dad's 110th birthday.  He always said he wanted to live to 120 but that wasn't to be. The photo was taken on his 97th birthday, surrounded by friends he was a little embarrassed to be the center of attention but I know he enjoyed himself.

His 98th birthday was much quieter, with my cousins Marie and Morley there to celebrate the day.  My brother, niece, nephew, and I had visited the week prior.  It was less than 4 weeks later when he passed away.

Sometime around the year 2000, Dad wrote out his family history for the McCord history book.  I thought I would share a bit of that with you today. I've made a few edits but this is much as my Dad had written:

My parents were married Mar 1, 1899 and lived in Quebec until 1904, when a large number of people were moving west, and they decided to move too.

They settled on a farm at Mortlach, Saskatchewan, farming there until 1911, when they decided to move further south to were McCord is now. I was only a baby, but was told that they moved on a rock wagon, covered with a canvas.  It was about one hundred miles, so must have taken 4 or 5 days.

Dad acquired three quarters of land (480 acres).  They settled on the east quarter and built a house where we lived until 1914.  A new house was built on higher land about 1/2 mile of the other one.  A barn, 60 feet square was also built.

Dad bought a small ranch about 1917, 24 miles south east of our farm.  We had about 100 head of cattle at that time so needed more pasture for the summer. We really enjoyed the ranch with its hills and trees, riding horses and herding cattle.

Dad died in the spring of 1925 just after his 54th birthday.  Mother was on a visit to Ontario and Quebec to see her parents and other relatives at the time, so it was quite a shock to her.  I was fourteen years old then, so finished Grade 8 in school, and then stayed home to help farm.

We sold the ranch in 1929, the year the drought started.  The next two years were worse still and we had nothing to harvest in 1931. I can still remember the dust storms that lasted sometimes for three days.  It would calm down at night, and start again in the morning.The dust came in through the windows and doors, and settled on everything.

When you got up in the morning, you could see the spot on the pillow where your head had been.  The table was set with plates upside down, until you were ready to eat.

In 1931, my sister Rita's husband Tom, my brother Wilf, and several other men, drove north to Nipawin.  Except for Tom, the others filed homesteads north east of the town of White Fox.  We left McCord on August 23, 1931, my 21st birthday. The government of Saskatchewan allotted each family two rail box-cars, one for livestock, one for machinery and furniture. We had to bring feed for the horses and cattle, as it took two days to make the trip. Four of us road with the freight train to feed and water the livestock.

When we arrived in Nipawin the next evening, our families were there to meet us and had found places to live. Two families including ours lived in a two bedroom house for the winter. (That house still stood until sometime in the 1990's when it burned - it was small!) We built a house in Nipawin, and we (Wilf, Bob, and I) found work anywhere we could, hauling wood, working at sawmills, etc.

Wilf and I rented three quarters of land in 1935 and he farmed with me until he joined the army.  Both Wilf and Bob served, until 1945 when they ended up in a hospital in Regina together. Bob had contracted tuberculosis and Wilf had been struck by one of their own trucks, suffering a broken leg and collar bone. (Letters between the two brothers caught up to them in the hospital, neither knowing the other was there). Wilf farmed with me for a couple of years, before moving to B.C. Bob purchased a quarter of land and we farmed together until he retired.

My sister Mae, and Mother lived together in a house on land I rented, until Mother's death in 1968.

I married Betty in November, 1954 and raised our four children on a quarter section of land that I had purchased. (Although he doesn't mention it, Dad farmed the three quarters for 49 years. He and mom were kept busy with farming, gardening, and running us to our various activities. Dad coached hockey in the winter, and Mom spent time as a cook at the camp we attended in the summer.  They both curled in the winter too, and Dad even made the ice at the local rink for several years.) Betty and I moved off the farm, into Nipawin in 1990.  I started doing volunteer work, and am still able to curl in the winter with the seniors.

Dad had a brain bleed in December, 2003 and just two weeks later Mom passed away due to cancer.  Dad had his first stroke in January, 2004 but was able to stay in their home with the assistance of home care until August of 2006.  He had a bad fall, injuring his arm, with a resulting infection that caused his mental abilities to be impaired.  As result he was moved to a nursing home in another town, but within a few weeks he was transferred back to Nipawin, where he spent the rest of his life.  After the infection had cleared, he was angry with me but we all felt, had he stayed at home, the next fall might have been deadly.  Just six months after his move to the home, he did fall, and was in a wheelchair permanently.

He did eventually come to enjoy his time in the home, greeting his guests and the staff with a big grin.  My brothers R, M, and I were able to be with him on the day before he passed.  R and I stayed the night, and Dad passed away quietly just before dawn. I had been sleeping in a chair beside his bed and something woke me.  I like to think it was Dad's spirit letting me know he was ready to go.  I had reached out, placing my hand on his chest, and felt those last few heart beats.

Dad was my hero, my champion, and a steadfast supporter.  He was a simple man, who cared deeply for his family and friends, never needing or wanting much, and always content whatever life's circumstances.  And what a life he lived!