I saw a comment on another blog today that struck me, will 2020 eventually become a curse word?  For example, what the 2020! Sounds about right.

As many of you will know, I'm a bit of a news junkie.  The news this week just sucked big time - I won't go through a litany of the bad news because it's just too depressing. Here at home there has been another fentanyl overdose, this time a young man my daughter worked with. Not only has our city seen an increase in deaths this year, our police service has reported far too many reports where nalaxone had to be used to revive people.  Covid has raised it's ugly head too, with a family friend reporting that her SIL, BIL, and their two small children have Covid, and the person who they believe spread it to them is in the hospital on a ventilator.

To add insult to injury, my grandson's father J's flight on Tuesday morning was cancelled but he didn't realize it until he arrived at the airport so I had the pleasure of his company (as well as D and Eli) for 24 hours.  There was an e-mail advising a change in schedule but he didn't bother to call to find out what that change might have been.  They've learned that booking through a third party is not the best choice as the e-mail doesn't provide the details and a phone call has to be made to get it.  And the knucklehead (one of my nicer names for the guy) wasn't smart enough to realize it.

My first comment to D when they arrived at the house (about 5:45 a.m.), was "what the heck are we going to do with him all day", meaning J.  As far as I can tell, his only interests are playing video games, smoking, and gambling.  He was tired as he hadn't slept that night, so after we returned from a long walk, he went to sleep for about 3 hours.  Later in the afternoon, he and I took Eli outdoors and after I'd watered the containers, I put the sprinkler on the lawn so the two of them could run through it.  Eli was a little nervous and wouldn't run until G'ma did, then he had a blast yelling at his Dad to catch him.  Later, back in doors, Eil fell asleep on my lap; it's such a treat to cuddle him as it won't be long before he's too big...or least think he is. 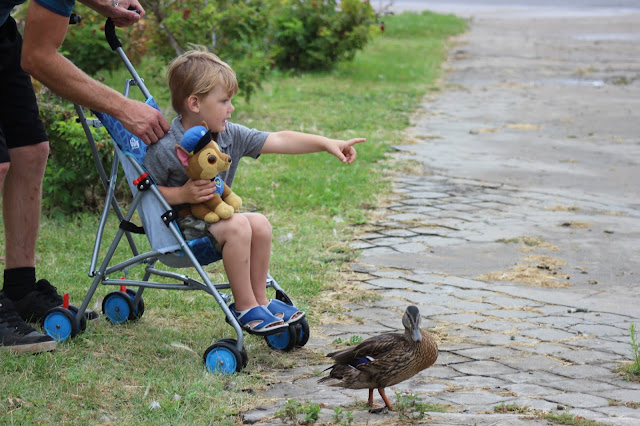 The three of them went to bed early that evening (thankfully), so I had a couple hours to myself.  We were all up by 5 the next morning; D dropped J off at the airport and then headed off home.  She hadn't planned to stay the night, so she and Eli were both in the same clothing, and she was more than tired of J.  While he had assured her he would take care of Eli during his stay, the reality was he did not much more than entertain the child every so often so she could nap.  Not once did he help Eli brush his teeth, give him a bath, tidy up the toys, or help with dishes or laundry. He left a bunch of stuff behind, which he now wants her to mail to him. I think she has finally gotten to the point where she realizes he's pretty darn useless. Sadly, there is another little boy in his life now too, though from the sounds of it Prescott's mom takes no guff from J.

I was exhausted myself when they left Wednesday, so didn't get a whole lot done until later in the day after a two and half hour nap.  I did get out in the morning to get a few groceries as there was a good price for coffee that ended on Wednesday.  Oh, and I made sure to check a flight radar site to ensure J's flights arrived in his final destination.  He had, hence the call to D to ask her for the items he'd left behind.  Priorities, right?

Thursday was a lovely day, as I met my friend K for lunch.  We met outside the restaurant and spent a few minutes on the patio before her partner J arrived.  He'd been golfing and decided to join us.  It was nice to see them both. After masking up, we went inside to order at the counter, get our drinks, then back outside.  They brought our meals out to us and we relaxed in the shade of an umbrella at our table.  The sun was warm, not hot, and there was a nice breeze.  Our conversation varied - while there isn't much new, we still can find lots to discuss.

That evening, I went out to bring in a towel that had been left on the deck and found two dead birds, a mama robin and a baby.  It appeared there had been quite a battle with bits of gore on the lower deck, while the two birds were on the upper deck.  I cleaned up the mess with tears in my eyes. I suspect it was crows as we've had several in the neighbourhood this week, with six in my front evergreen earlier.  I know it's the way of nature but it doesn't make it any easier to see.  When I came back from disposing of the birds, the male was in the tree but flew away when he saw me.  I'd heard him, but not seen him as I was cleaning up, so I wonder if he stayed there until they were gone.  Or maybe I'm projecting my feelings.

After several days of heat, we're trending down. Friday morning was down right chilly, 9C (48F)!  I'd left the door open to the sunroom overnight but closed for a couple of hours as there was quite the breeze blowing through. When I went for a walk later, I actually had to wear a hoodie...first time in months. 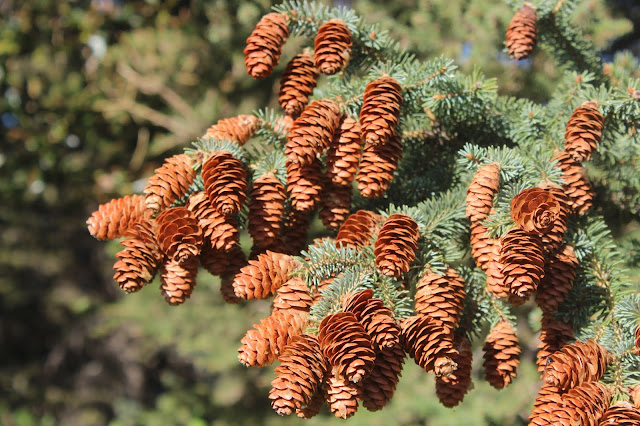 The signs of autumn continue to be more evident.  This spruce is covered in cones, I'm glad it isn't in my yard! 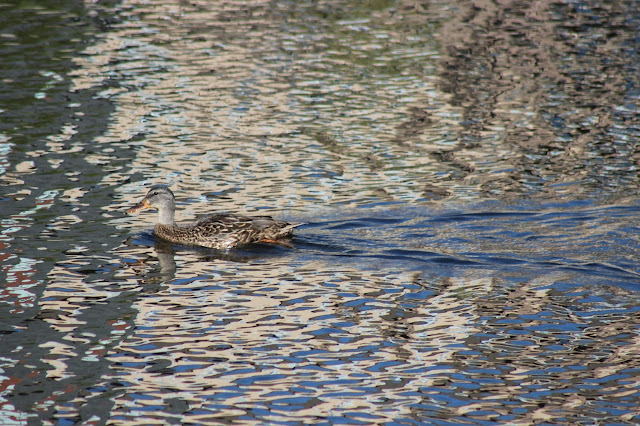 My favorite photo from the walk - I took it because of the wake behind the duck, and my camera saw more than I did.  I love the colors in the water!

The pond was pretty quiet, with most of the ducks resting in the sun beside the pond, the cormorant on it's regular perch, and a few geese.  I had the walking path mostly to myself too.

I made a run out to Costco to pick up another Christmas gift for Eli, and found a couple more for him and my son.  I've been updating my list and I'm more than way through the purchases.  The goal is to have everything bought and paid for well in advance of Christmas. It shouldn't be a problem at this rate.

I didn't get a lot of crocheting this week, but will get back to it this weekend as the live sports will be aired.  I didn't mind the delay; I am thankful that the leagues are showing support to the BLM cause.  This is not solely an issue for the USA, as people of color including our indigenous people face discrimination and racial profiling here in Canada too.  Our world is changing and the pandemic has certainly brought to light the darkness that lurks in our world.

In any event, I'm working on finishing the last of the baby blankets.  They will need to be washed and blocked, and then I'll get started on another Christmas gift, this one for my niece. It's called a poncho dress, and is made with a heavier weight yarn.  I've purchased a variegated blue yarn, similar to this pattern. 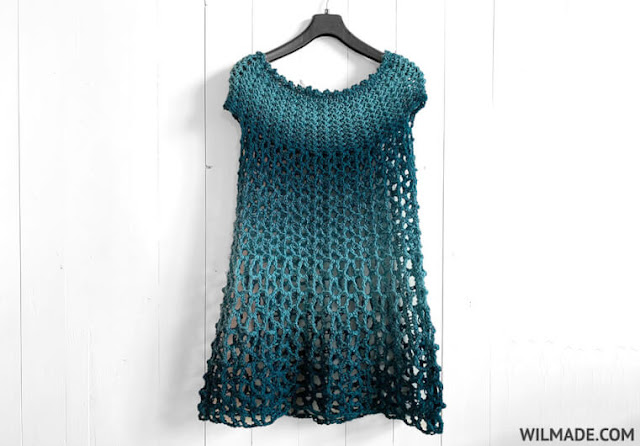 It's been an up and down sort of week, certainly mostly down at the beginning but trending upward since then.  Fingers crossed that trend continues!  On that note, I'm off to watch hockey and crochet.
Take care everyone and stay well!