July in Saskatchewan often means a week or two of heat.  And by heat, I mean temperatures near or in the 90's.  I don't know how folks manage with the heat when it gets beyond that and for extended periods of time. The few days we have high temps (for us), I'm pretty much useless by noon.
I do have air conditioning in my home but I try not to use it until I must.  I keep the thermostat at 76F (24C) so it doesn't generally start blowing cold air until mid to late afternoon.  That means that from noon until 3 or 3:30 I'm pretty much a lump.  Here's what I've been working on when I'm just sitting. 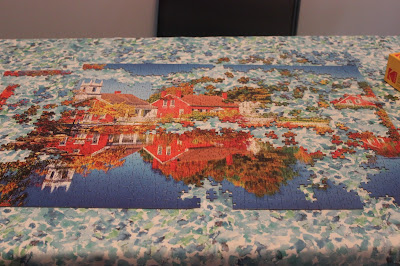 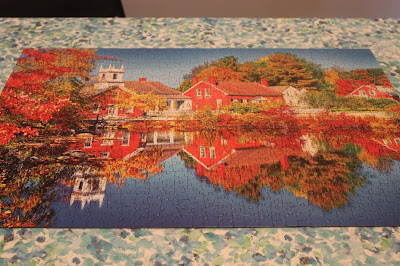 It took me several days to put this puzzle together.  The color changes were frequent, and it wasn't easy to identify where a piece might fit.  Eventually I got to the point where I selected a piece to try based on its shape.  But I had fun none-the-less. 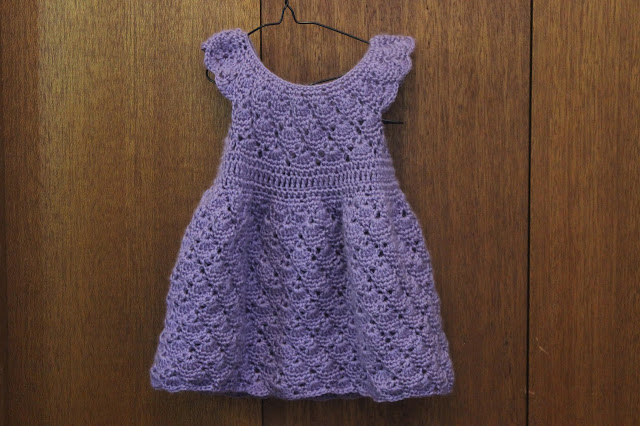 Remember the yarn I purchased on sale a couple of weeks ago?  Just over one ball of yarn was used to create this little dress.  Sometimes I just make things because I think they're beautiful and this is one. I need to pick up some ribbon (which will be threaded at the waistband).  I'll try to sell it on the local buy and sell website as I don't have a little girl in my life to give it to, and if I did I could always make another since I have almost two full balls left.  The site that I used for the pattern has numerous other little dress patterns so there are options. 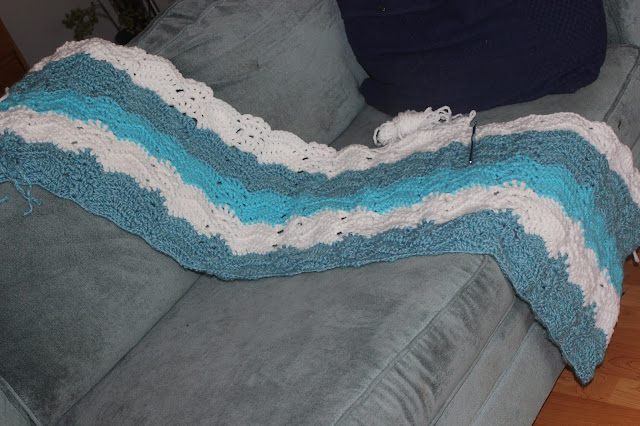 More yarn purchased in the last few weeks - this will be a gift for my daughter for Christmas. I can get away with posting since she doesn't read my blog.  Each row represents almost all of a ball of yarn and I sort of planned it that way and I got lucky with my calculations.  I also turned the afghan sideways, the stripes will be vertical rather than horizontal - again this is partially intentional and partially a fortunate happenstance.  I anticipate I'll have some yarn left over and I'll use it up on the edging or I'll purchase one more ball to finish it off.  It is bulky yarn so is working up fast. 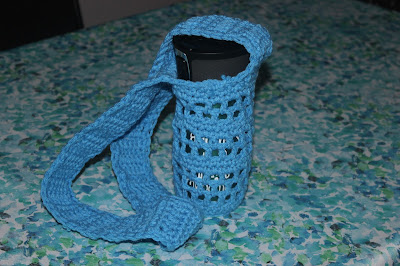 On my walk last week I was wishing I had brought water along with me.  I always carry my camera bag and can fit in a small water bottle (or used pop bottle) but I didn't think to do so.  When I got home I decided I'd make a carrier for my metal drink bottle and used some old yarn.  It took just over an hour, with a few interruptions, to make it up.  I haven't used it yet, because it's been so warm in the morning this week that I haven't gone walking.
When I crochet I prefer to watch television so I have some noise in the background.  This week I watched the six part series of "The Book of Negroes".  I'd read the book, written by Lawrence Hill, several years ago and really enjoyed it.  The movie was very good too, though I suspect they left out some of the more violent parts for prime-time viewing.  Still, it was worth the time to watch. 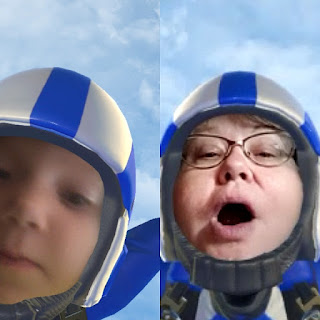 I've also enjoyed some video calls with Eli.  He is so adept at using the I-pad or his mother's cellphone to call me.  She merely needs to set one of these down and turn away and he snatches it up to make a call.  (I'm not the only one he calls, his daddy, his other grandma, and his own mother get regular calls).  Once we're chatting, he likes to play with the special effects. I'm learning to use these too, I can't let a three year be that far ahead of me!  One thing he does, that I don't know how to do, is take photos while we're chatting, and then send them to me.  Here we are going skydiving! (My mouth is open because when I do that, I spiral out of the sky...it's fun to watch when it isn't real!)
Thankfully the high temperatures have eased off as we reached the weekend (and August).  Friday we reached a high of 25C (77F) and today will be about the same.  Friday I spent the morning outside, mowing the lawn, pulling some weeds (they pop up behind me as I move along), picked up pine cones, swept up the crap from the elm trees, and watered the containers.  It was good to be outdoors and not feel like I was just out of the shower.
Today I headed out for a walk and in the hour that I was out, it warmed up from 18C (65F) to 23C (73F).  I was glad to have my water bottle with me.  I had my camera with me, of course, here's a few favorites from today's outing. 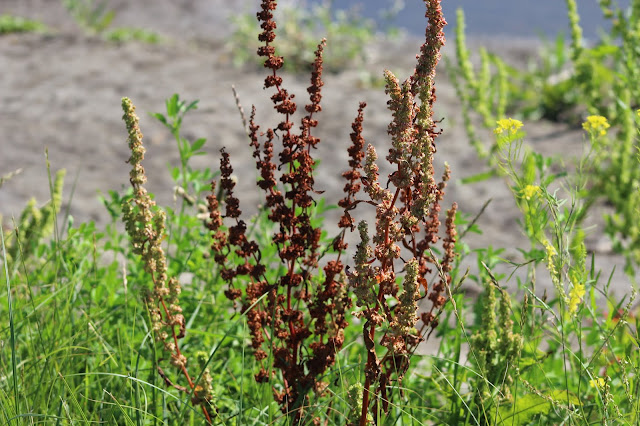 The weeds are beginning to turn color.  It is August, the time when our days are warm days and our nights are cool.  As proof, I woke to 11C (52F) this morning.  It felt good! 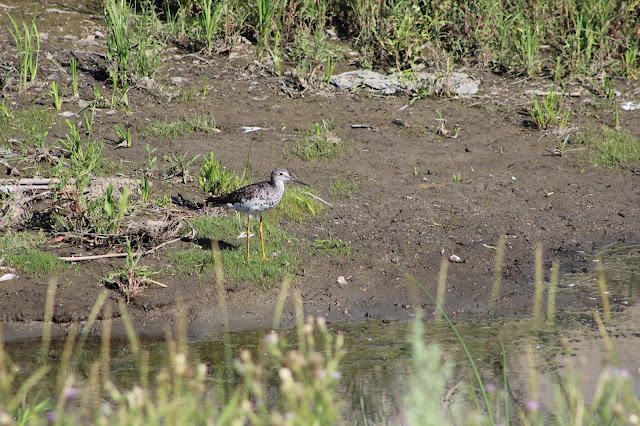 I was excited to find the marbled Godwit again.  It was over on the other side of the creek by a retirement community, an area I usually don't walk.  I spotted it out of the corner of my eye, that head bob clued me in, so I went down the embankment a wee bit to get a close up. 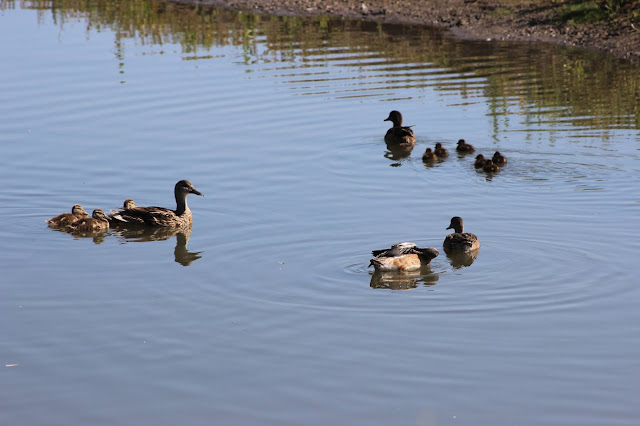 The mama ducks are still taking care of their babies, some smaller than others.  But more and more I'm seeing the young ones nearly grown. 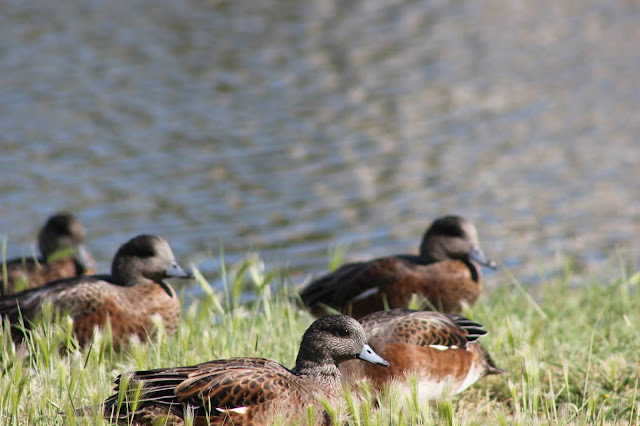 This group of wigeons are still smaller than the adults but oh so close.  In a few weeks I expect they'll be starting their migration south. 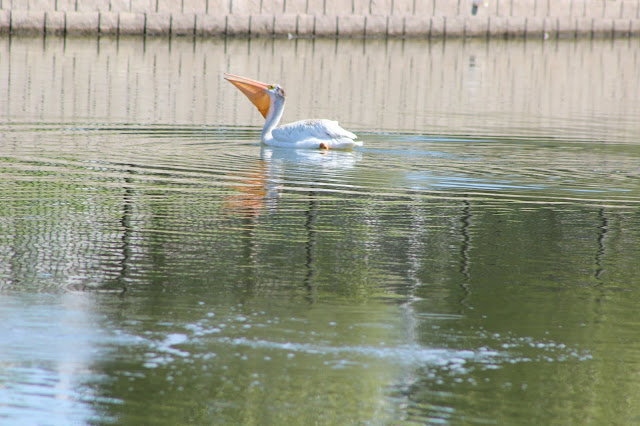 Not the pretties background, but the pelican wouldn't stay still!  It was getting something to eat out of the pond, but I'm doubtful it was fish. 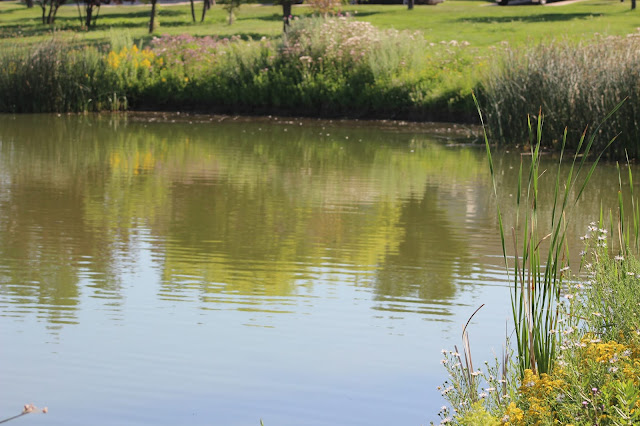 The focus is a bit off on this photo - my camera and I often don't see the same thing - but I was wanting the reflection more than anything.  This end of the pond was empty of birds.
I'm off to visit D and Eli sometime tomorrow and won't return until mid-week.  C will take care of the cats and will even water the containers if I remind him by text.  It's a holiday weekend, so I decided to wait a day to leave as the highways will be busy.  We've got plans to do some clearing out of her house, and I'll send her off for a few hours to spend some time on her own while I deal with Eli.  She needs a break!
Take care everyone and stay well!
Posted by Maebeme at 11:38
Email ThisBlogThis!Share to TwitterShare to FacebookShare to Pinterest
Labels: crafts, grandson, grandsone, walk, weather