Living in my bubble

I'm posting this on Friday because I'm off to see Eli and D, around mid-day on Saturday.  She may make one more visit to the city this month before Eli starts attending pre-kindergarten, though that isn't a certainty.  At that time, all visits will cease and my bubble will grow smaller again.  It makes me sad, but he is really looking forward to being around other children and D needs the break.

I don't generally share much about her problems but I can say that she suffers from both depression and anxiety on a daily basis.  As a result, I get four to five phone calls a day, most often to check-in but almost always with something that she is worried about.  The pandemic has made this worse, and being at home most of the time with a rambunctious 3 year old doesn't help matters.  I'll admit I'm not always the most sympathetic, especially when we've had the same conversation for three days running, but I do know that my spending a few days with them is helpful to her.  Not only do we put her house to rights, but I take some of the attention off her from Eli, and she gets an opportunity to spend a little time on her own.  I'm hopeful Eli attending school part-time will offer this respite for her as well.

Back at home, we've had a much cooler week, with temperatures in single digits (40's F) first thing in the morning and warming up several degrees during the day.  This weekend we'll have a couple of nice days and then the forecast is suggesting we'll drop to near freezing on Monday morning.  I haven't yet needed to switch on the furnace though D has said she has done so just to take the chill off in the morning.  Even though we'll still have decent weather for several weeks yet (fingers crossed), I pulled the tomato plants on Thursday.  I got mounds of cherry tomatoes off two small plants, sweet and juicy.  Eli likes them too, so I'm taking a sandwich bag full for he and I to share.  My onions didn't do very well sharing the pot with the tomatoes - I guess they didn't get enough light.

I also brought my pot of herbs indoors.  It can sit in the kitchen window which looks out onto the sun room.  Maybe this way I'll remember to use some of it!  I realized today, one plant is peppermint, another rosemary and I'm not certain of the third.  I've got a succulent in a pot on the windowsill, the only one of three to survive, and a piece of coleus that is currently rooting.  Saku is the only cat who gets up there and he hasn't bothered the succulent so perhaps I'll have a window of greenery this winter.

Even with the cooler temperatures, or perhaps because of them, I got in a walk every day.  I didn't have my camera with me so there was just one photo taken with my cell phone.  The number of birds are growing less each time I walk, though there are still at least one and often three or four cormorants at the pond.

On this walk, I wanted to get in some extra steps and activity so walked another loop around the creek before heading to the pond.  There are still a few ducks hanging out here, but the godwits and killdeer have moved on.  No geese either, as they prefer the pond.

Today I made sure to bring my cellphone with me so I was able to get a few more photos.  There were dozens more ducks on the creek and similarly more geese at the pond.  The godwit was back too, and there were two cormorants on the pond.  One was out feeding and I stood for a while watching.  It would dive and stay under water for 10-15 seconds at a time.  I'm not sure how successful it was, but I assume it found something.  No video of that, but the ducks at the creek had lots to say...if you can hear it over the noise of the wind.

I've been taking advantage of these days to walk, even on the one day that it was lightly raining.  As I tell my daughter, I don't melt, even if I wish I would.  It was cool but with a light rain jacket over my hoodie, and my hands tucked into my sleeves I was toasty warm.  About half way through the walk, the rain ended and I was able to unzip my jacket.  We really truly have been blessed with wonderful weather and I am going to take advantage of it for as long as I can.

Another blogger (thanks Cheryl) had mentioned changing things up, and I was inspired to re-arrange the furniture in the living room this week. Now this may not mean much to anyone else, but my living room furniture has been in the same position (though I did get a new couch and chair five or so years ago), for the ten years plus that I've lived in the house.  My son did a double take when he arrived home that day, and even commented the second day it would take a little time to get used to it.  I like how much more open and larger the room feels.

This photo doesn't do it justice as it really doesn't show the length of the room - there is still another 3 feet behind the chair.  No before photo (of course because who thinks of that?)  The couch used to sit a little forward of where the grey chair is now and closed off the space.  I moved side tables as well and made sure everything was spic and span.  The ottoman in front of the couch stays there to help my old cat Sasha to climb up.  I had to laugh, both cats were quite confused about the placement of the furniture.  Sasha, more so than Saku, as he couldn't figure which end of the couch to sleep on.  Didn't take long before they were content, as am I!  A change is as good as a rest, right?

I've had a more productive week than last, getting the household chores completed, laundry, floor washing, vacuuming, bathrooms cleaned, and so forth.  On Sunday I had finished the last of the three blankets. 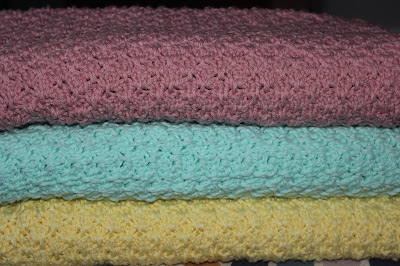 I weaved in the ends and washed them, and I'll take them to D tomorrow.  She'll hold onto them until a little closer to B's due date.

Since those were finished, it was time to move onto a couple more projects.  I whipped up the poncho dress, but was disappointed by the size and length - even with blocking based on the gauge it just didn't look the same as the original pattern even though it was the same size she made. Do you suppose the author messed with me or did I mess up?  To be honest, it's probably me.  It certainly isn't dress length but will make a nice tunic with leggings and black top underneath.

That's alright, as I have sufficient yarn to make another one,  I'll use my daughter as a guinea pig model, and play around with the pattern to get it to where I want it.  My brother was able to tell me L's sizing too so will use that information to ensure it will fit my niece.

I also started on a balaclava for my nephew.  And because the first project finished up so quickly, I've started a sweater for Eli as well.  The pattern I'm using for the sweater is knitted from side to side, from one sleeve to the other, and then the sleeve and side seams are sewn up.  It is a cardigan so requires holding some stitches while working thre right and left sides.  I've never worked a sweater this way, but read through the pattern and in my head it makes sense.  It also has a hood that is knit separately, but I'll check with D to see if she wants it.  If not, I'll figure out how to add the collar later.

If anyone is keeping track and frankly I doubt you are, I have yet to finish the tank top I started knitting for myself in the spring.  I'm not sure why but I just don't feel like picking up that UFO (unfinished object) but it will happen, just later rather than sooner.  Another blogger, (thanks Jackie) had mentioned yarn on sale at Michaels so several more skeins of yarn made it into my cart again this week.  I have to make another baby blanket and about half what I need to make a larger afghan.  The prices were 50% or less of regular pricing so it was definitely worth stocking up.  I'll wait for another color to go on sale, and I know exactly which one, to ensure I have enough for the large afghan.  It is my intent to eventually sell the baby blankets but I'd like to have ten or so ready to go before I list them on our local buy and sell.  I have six or seven at the moment so I'm close.  The afghan will likely end up being sold as well, because I made a new one for myself last year.

Before I head out tomorrow, I need to dig up a few perennials to transplant into one of D's flower beds.  The neighbour has been kind enough to share from her own yard so there is a variety of plants already there in a large bed in the back yard.  Unfortunately it hasn't been properly weeded over the years so there are unwanted trees and large weeds.  My goal is to get some of it cleaned up while I'm there.  Eli loves to be in the out and so do I.

I've still got my bag to pack for the next few days and a list of things to take with me that need to be loaded in the car.  On that note, I'll sign off for the week.

Have a great weekend everyone!  Take care and stay well.