Another boring week for my readers, since I've done little except watch curling, crochet while watching curling, and fit in chores between games.  If you give this post a pass, I won't blame you. :)

The Brier has not disappointed, there have been some incredible shot making as well as some spectacular misses. If you have a minute to spare, check out the round the horn shot by the young Newfoundland skip.  They haven't had the best of weeks and were down 7-1 when he made this shot for his deuce.  They didn't win the game, but this shot made the sports news. Our Saskatchewan team had a couple of tough games, but made it into the second round robin, finishing second in their pool.  They placed third in last year's event, but will need to work hard to get there this year.  They split their two games yesterday and have two more today.

Meanwhile, when I was at D's last week she gave me a container of yarn she's gathered over the years.  She has tried to knit something but gives up readily as she hasn't the patience for it.  I get that, as there are lots of things I haven't the patience for either.  Among the yarn were three skeins of a variegated yarn.  I knew there wasn't enough to make a baby blanket, but after checking my stash, I added some additional yarn in three different colors similar to those in the variegated balls.  I'm calling it my Easter blanket.  I ended up with just a little bit of yarn leftover, which I rolled into a ball for Saku to enjoy. Once the threads are sewn in, I'll wash it and plan to put it on Facebook for sale.

I've had no success on Varage sale - though there is someone who is "watching" my items. I suspect they think the blankets are over-priced...though in comparison to the others available I would say they are not.  I'll the FB Marketplace with the Easter blanket and depending on the success (or failure) I'll decided whether the others will get posted to FB as well.

Since there was no curling on Monday morning, I decided to make a run to Value Village as I'd received an e-mail with a coupon for 20% off.  I went looking for specific pieces to make a tiered tray.  I thought I'd use a pie plate, a pizza pan and some sort of candlestick.  I didn't find a pizza pan, but was even happier to find a tray. The candlestick appears to be real silver or at least plated so I decided I wouldn't be painting that! 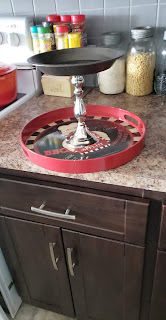 On the left (if blogger will co-operate are
the three pieces before and it will not...grrr!) and the after on the right below. I chose the blue because I think it will work throughout the year, with different decorations.  In addition, I have a good amount of blue in the house already so it fits in well.   You can see it also has a practical side - the salt and pepper are readily available.  Our meals are served up off the island - neither of us eat at the kitchen table except when D and Eli are visiting.  We got out of the habit when the kids were teenagers as the kitchen in the old house had no room for a table, and the living room was too small to add one either.  We've grown accustomed to eating our meals in front of the television or computer.

Friday morning, there was no tie-breaker games so I had an opportunity to run out to pick up groceries, cat food and cat litter.  I did get a wee start on the spring cleaning. A month or so ago, I had pulled out the jackets, mitts, gloves, toques, etc. from the front closet and done a bit of a purge.  But, I hadn't pulled the shoe rack and the other items off the floor. When I did this, the other day, I found enough cat hair to make a small kitten.  Oops, I guess it's been awhile.  After cleaning that up, I washed the closet floor and put everything back where it belongs.  Note to self: clean the closet more frequently, I don't need another cat!

I'm off to spend a couple of hours on Ancestry.  I'm continuing to follow the branches from my grandfather's great-grandparents. The first two branches didn't a lot of time, as there isn't a lot of information available on either individual.  One, because his GGF changed his last name and cut ties with his family in Scotland, and his GGM may also have changed her name, as finding any family members has pretty much come to a standstill.  My relative who started this, has hired a professional to do some more research and hopefully he'll come up with something we have not been able to find.

Anyway, enough of that. We're having a lovely spring day here today, with sunshine so I'll be opening the sun room for the cats in the next hour or so.  To end off this post, I've got a couple of photos from the backyard this week. The squirrel would not turn and look at me, even when I tapped on the window.  Definitely into it's meal! 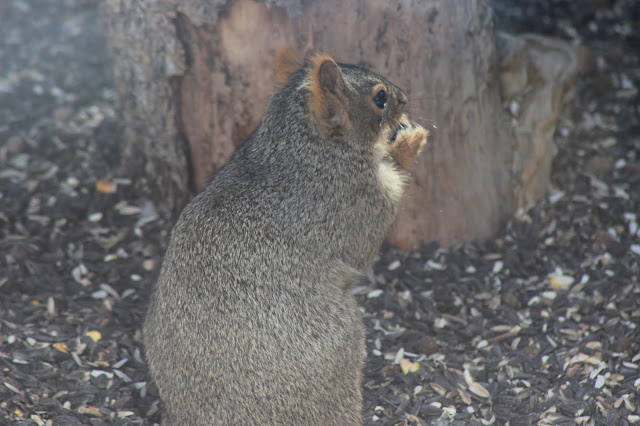 I believe this is a grosbeak but readily admit I'm not good at identifying birds. 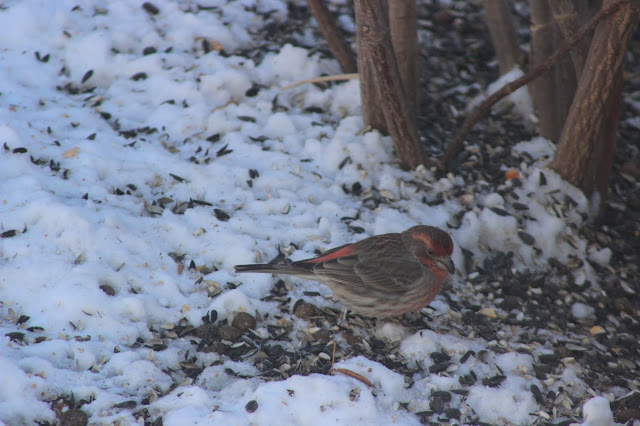 Have a great week everyone, take care and stay well!